Cover crops have known benefits for annual cropping systems; however, traditionally, the year of the cover crop is a year without cash flow. Although many organic growers build cover crops such as sweet clover and others into their systems for fertility and weed suppression benefits, few conventional growers are willing to include an annual crop without cash flow in a cropping system.

Researchers at Agriculture and Agri-Food Canada (AAFC) in Lethbridge, Alta., conducted a multi-year study over five years to determine if intercropping legumes as a cover crop with winter wheat could provide an option for growers on the Canadian prairies. The objective of the project was to determine if cover crops including alfalfa, red clover or Austrian winter pea could be successfully established with winter wheat in fall or spring in a semi-arid environment. Researchers also wanted to compare the winter wheat yields and resulting nitrogen (N) benefits from the intercropping with different cover crops.

“We wanted to find out if we could underseed a cover crop with winter wheat, which would provide the benefits of a cover crop but still provide growers with a crop and cash flow every year,” explains Dr. Bob Blackshaw, research scientist with AAFC in Lethbridge. “We expected there to be a tradeoff between the benefits of the cover crop, such as N fixation, and the yields of winter wheat, and wanted to evaluate the success and impacts of the different cover crops.”

The trials, conducted under a zero-till system at Lethbridge, included winter wheat under-seeded with red clover, alfalfa and Austrian winter pea in the fall in mid-September. The same cover crops were also seeded in April into established winter wheat in separate plots. The winter wheat was harvested in mid-August and the cover crops were killed in mid-October around freeze-up with an application of glyphosate (1335 g a.i./ha in 100 L/ha spray volume). A no cover crop winter wheat treatment was included as a control. Canola was seeded the following spring as an indicator crop to assess residual effects of the previous legume cover crops compared with monoculture winter wheat.

“The results from the fall and spring-seeded cover crops showed varied success rates. The spring-planted legumes emerged well, but were unable to compete with the winter wheat that was already established,” says Blackshaw, who added the cover crop populations remained low and small over the growing season and did not contribute anything useful to the system. Although previous research at other cropping areas such as Ontario, Wisconsin and Michigan were successful with spring frost seeding cover crops into winter wheat, this concept was not successful under the shorter growing season in Western Canada.

Of the fall-planted cover crops, red clover did the poorest. It did not survive in two of three years of the trials, and in the year it survived the populations were too low and too small to be beneficial. “Austrian winter pea was actually quite exceptional; however, it grew so well it competed with the winter wheat, reducing yields by 23 to 37 per cent compared with the no cover crop control. Therefore, it did not prove to be a successful option for winter wheat grain harvest,” says Blackshaw. “Although our objective was not forage production, some farmers wondered if they might be able to use the Austrian winter pea and winter wheat as a silage or forage crop, which may work well in those cropping systems.”

Alfalfa was the one successful cover crop from the trials, resulting in equivalent winter wheat yields to the no cover crop control and residual N for the following crop. The results showed that fall-planted alfalfa exhibited good winter hardiness, provided some weed suppression without reducing winter wheat yield, caused only a slight reduction in soil water content, and contributed an extra 18 to 20 kg/ha of available soil N at the time of seeding the following spring crop.

Soil N levels were measured just prior to seeding canola, measuring an extra 18 to 20 kg/ha of soil N in the spring following alfalfa compared to the monoculture winter wheat plots. “This level is about 40 to 50 per cent of the N that is expected to be released over the growing season as the alfalfa degrades and continues to release N,” explains Blackshaw. “We expect to see double that amount or more of soil N to be released over the cropping season, likely in the range of 40 kg/ha and higher. Although this amount of N is not sufficient on its own, growers will be able to use a lower rate of N in the following canola crop. When N prices are high, this option may be more attractive to some growers. The fall-planted alfalfa also increased the yield of succeeding canola in unfertilized plots in two of three experiments.”

Along with the good yields and increased soil N benefits from fall-planted alfalfa, there are several other benefits. Cover crops maintain ground cover on the soil over the winter, provide improvements to the soil structure and reduce soil compaction. “Legume crops also improve beneficial soil microbial populations and other soil improvements,” adds Blackshaw. “Many of these improvements are hard-to-measure, intangible benefits that improve cropping systems.”

However, there are also some tradeoffs in terms of the extra cost of alfalfa seed and the additional spraying operation in the fall to kill the alfalfa. Growers would also need to have seeding equipment that can seed the winter wheat and alfalfa at the same time.

“Our research shows that under-seeding winter wheat with alfalfa can provide some advantages, including the benefits of a cover crop without losing a year of cash flow,” says Blackshaw. “The winter wheat yields were the same with or without a cover crop, and the weed suppression provided by the cover crop meant no in-crop herbicides were required. Growers can consider intercropping alfalfa and winter wheat as a way to improve soil N levels and gain from other intangible benefits of improved soil structure and increased beneficial soil microbial populations.” 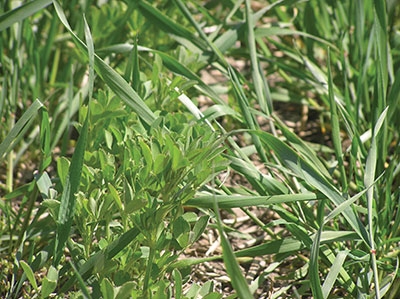 Alfalfa growing between rows of winter wheat in early spring. Cover crops have known benefits for annual cropping systems; however