Forages are a good choice for crop rotations with many economic and environmental benefits, according to a new report, by the Ontario Forage Council. 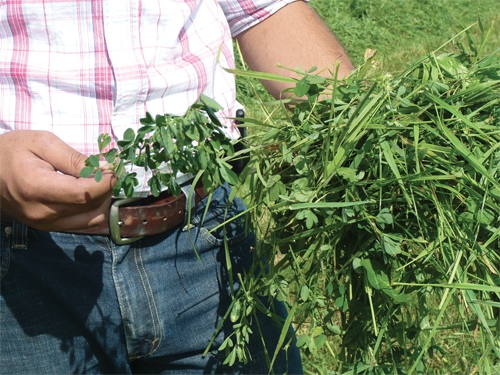 Not only can forages bring a similar net return to corn, but also they can improve soil structure, reduce soil erosion, increase biodiversity and help minimize resistant weeds, according to the report.

The report, funded by the Farm Innovation Program (FIP), documents the many benefits of including forages in a crop rotation.

As laid out in the report, forages are often dropped out of crop rotations because of today’s high prices for commodities such as corn and soybeans. However, hay prices have also risen to historic levels due to high demand and reduced supply in the United States and globally.

The report, written by Doug Yungblut, of Yungblut and Associates, showed that on “an annual basis it costs roughly half as much to produce an acre of hay as it does to produce corn on that same land ($242 versus $539). With a hay yield of 3.5 tonnes, the current net return can be similar to a 160-bushel corn crop.  See figure 1 below.

Soil quality and environmental improvements
When looking at other benefits, the report showed that forages also bring improvements in areas such as soil quality and health, reductions in herbicide resistant weeds, and increased carbon sequestration. Depending on the legume level, a hay crop can contribute up to $70 worth of nitrogen to a following corn crop. Even after the forage crop is removed, the benefits to soil quality can last for several years.

Fritz Trautsmandorff  of Dunlea Farms near Jerseyville, Ontario, believes that ‘’having forages in my crop rotation as compared to just growing row crops is like driving a four- wheel ATV versus a three-wheeler. The inclusion of forages makes a much more stable rotation that works better for me and my farm in the long run.”

Soil stability, porosity and organic matter all improve with the introduction of forages into a crop rotation. The tendency is for crusting and compaction to decrease whereas drainage, capacity to hold water and root growth increase.

Weed reduction is another benefit of forage crops because they are cut frequently before the plants go to seed. Established forages can generally outcompete weeds and prevent the development of plants after germination.

Forage crops also serve as a reservoir for bees and other beneficial insects that pollinate crops such as canola. They also improve a farm’s biodiversity and are critical to many Species at Risk. A study by the International Hemp Association, which assessed 21 major crops more than 25 different criteria defining ecologically friendliness, determined that alfalfa was the most biodiversity-friendly of all the crops.

For a full copy of the report, visit the Ontario Forage Council’s website at ontarioforagecouncil.com.

Export opportunities
Another relatively unrealized benefit of forages is the huge market opportunity for hay exports. Canada exports between 400,000 and 700,000 tonnes of hay and other forms of forage per year to Japan, the United States and Korea. China is also a rapidly growing market, as is the Middle East.

In Ontario, most of the hay crop is sold to dairymen and horse owners within the province and throughout the eastern United States. Critical factors to establish before growing hay include plant species, stage of maturity at harvest and end use, as horses and dairy cattle have very differing quality and nutritional specifications. A major exporter of hay to the United States, Don Rowntree of Via Pax Ltd. in Georgetown, Ontario, emphasizes that consistent quality of hay is vital for exports. “When competing with nice green hay from irrigated areas like Nebraska, even a few bales of hay that are off quality in appearance can cause the rejection of an entire load.”

The size and type of bale produced and sold are also important. While farmers prefer to produce large square or round bales, as they’re easier and faster to handle, the vast majority of horse customers are not equipped to handle their large size. Trautsmandorff is one farmer who has solved this problem by installing equipment that converts large square bales to small squares, thus meeting the needs of his horse customers.

The bottom line is that forage crops can give returns that are competitive with other cash crops even with today’s high commodity prices. Furthermore, the benefits to soil structure, water retention, and improved nitrogen availability, although more difficult to quantify, are invaluable. Opportunities abound for farmers looking to serve specialized niche markets for dairy and horse farms.