Features Agronomy Tillage
The best of both worlds

A shift in the landscape is occurring as farmers are increasing tillage in the wake of high commodity prices.
With the view that reduced tillage practices carry a yield drag, some producers are reverting to more aggressive methods to capture as many bushels per acre as possible. The move, which increases the risk of soil erosion, is raising concerns and renewing calls to strike a balance between finding an adequate level of tillage to benefit the crops and leaving enough residues to protect the soil. 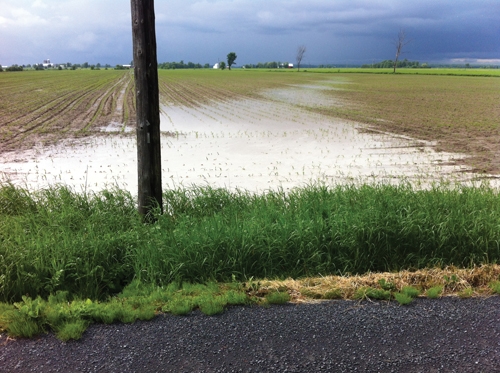 Water lying on tilled fields after a spring storm in Bainsville A shift in the landscape is occurring as farmers are increasing tillage in the wake of high commodity prices.

While tillage practices aren’t extensively tracked across the province, Greg Stewart, corn specialist with the Ontario Ministry of Agriculture, Food and Rural Affairs, says most people in the agriculture business would agree that there has been a significant shift to more tillage, especially when planting soybeans after corn.

“We have quite a range of tillage options,” notes Stewart. “In some areas, the mouldboard plough is back into those cornstalks in a big way and, in some cases, what used to be known as no-till, is vertical till or some other type of till.”
In addition to the shift to more tillage, instances of soil erosion, caused by rain or high winds, are becoming more noticeable, too. With dry conditions and high winds in the spring of 2012, Peter Johnson, OMAFRA cereals specialist, says windstorms were causing “brownouts” that were as dangerous as whiteouts in winter snowstorms.
“There were more stretches of highway where people nearly had to pull off the road than we’ve seen since the 1980s, and that is not a good-news scenario for agriculture,” says Johnson.

There is more behind the shift to increased tillage than just the higher commodity prices. Stewart says other factors include the agronomic advantages of planting corn and soybeans earlier and consolidation in the industry that has led to farmers having to plant bigger acreages. “I think those things add up to a real push to simplify operations, and to simply operations, tillage often gets put into play,” says Stewart.

Another factor is the residue from higher-yielding corn. Recalling research done in the 1990s, Johnson says the yield loss in no-till soybeans after corn was approximately one or two bushels per acre. With corn yields at 120 bu/ac and soybean prices at $7/bu, he says, the economics are more palatable for no-till. But the outlook is different when dealing with yields of 200 bu/ac. While he doesn’t subscribe to the theory that newer genetics are making it more difficult to break down the corn residues, Johnson says this perception plays into the move toward more tillage.

Moreover, the greater residue makes it more difficult to plant soybeans in early May for those using no-till or reduced tillage. Horst Bohner, OMAFRA soybean specialist, says it creates a more stressful environment for the seedling, especially in a year when the spring is cold and wet. “Tillage can really get the root established faster because the ground is a little warmer and it’s just a better environment for the early growth, and that can make quite a difference,” says Bohner.

Conserving the soil
Amid the move to more tillage, there are other farmers who are staying the course with no-till and reduced tillage. Shawn McRae of Bainsville, Ont., is heeding the lessons learned by his father and grandfather, who adopted reduced tillage in the 1980s. The 1994 graduate of the University of Guelph, who says he has never operated a mouldboard plough, sees many parallels between today’s agricultural boom and the one that occurred in the early 1970s.

“Technology advanced rapidly on several different fronts: We saw hybrid grain corn production in our area go from nothing to being a major crop,” says McRae. “We had atrazine, cheap nitrogen and diesel fuel, and tractors that went from 50 horsepower to 200 horsepower . . . throw in the boom in commodity prices and you had a pretty good recipe for rapid expansion.”

For McRae, one of the more significant aspects of reduced tillage is improving the quality of water on the farm. “It’s not solely based on my consideration for the environment and being a conscientious steward; it’s about how I measure soil loss from our farm,” he says.

If McRae can’t see it in the water, then he knows he is not losing soil. Besides reducing soil erosion, he says, the benefits of reduced tillage include improved crop health, improved drainage, better nutrient availability and less fuel consumption.
As for yields, McRae, who grows oats, barley, corn, soybeans and dry beans, doesn’t think he is giving up much by reducing tillage. “We have the same ups and downs, given the variability of the seasons, but I’m right in the thick of things when it comes to absolute yield, and I know that I’m doing it at a fraction of the costs,” says McRae.

Blake Vince, who farms in Southwestern Ontario near Merlin, shares a similar story of growing up with the adoption of no-till. Although he has done his share of tillage using disc rippers, soil savers, vertical tillage tools, etc., Vince is quick to point out that he has never ploughed an acre using a mouldboard plough. Noting that the farm does not have an abundant amount of topsoil on the heavy Brookston clay, he strives for maximum residue cover to retain soil and water to improve the soil structure.

“I’m an advocate for soil health,” says Vince. “If [soil] is our biggest investment and gives us our biggest annual return, then why are we not more careful with how we manage it?”

A proponent of planting cover crops, his go-to is red clover, underseeded in wheat. By growing cover crops and using less tillage, Vince is seeing more earthworm activity and improved water filtration in the heavy, clay soil. “On a big rain event, you don’t have ponding, you have less crusting after planting and you have a dramatic reduction in fuel costs,” he says of the benefits.

In addition to the increased earthworm activity, which is an indication of good soil health, Vince is also encouraged by the sight of mushrooms growing in the field. “There are so many micro-organisms living in the soil that are not visible to the naked eye but with mushrooms growing that is a visual indicator of increased soil health,” adds Vince. “It is unlikely that you’ll find those in a conventional field because you’ve disturbed all that mycelia, which are below the soil surface and act to degrade the soil residue.”

The 30-percent solution
In an effort to strike the balance between the shift to increased tillage and the need for soil conservation, Greg Stewart and his colleagues are recommending a compromise: Leaving a ground cover of at least 30 percent residue. “Whether those plants are dead or alive, you can do something significant in terms of reducing erosion potential,” says Stewart.

Rather than advocate one system over another, he suggests blending the good parts of various practices into one system that will provide residue, produce reliable yields and make the most of planting efficiencies.

Stewart concludes that it should be easier to leave residues, considering advances in seed treatments, better stress tolerance in hybrids, innovations in machinery and planter modifications. “When we look around the landscape, in fact, we’re going the other way. That is particularly troublesome,” he says.


Related
To disc or not to disc?
Strip tilling for higher yields
Ridges revisited
Minimum tillage a smart move