Increasingly, research is showing that canola root-associated microbiomes can impact crop growth and nutrient uptake. Some of the soil micro-organisms are beneficial to plants that protect them against pathogens, mitigate the impact of abiotic stress, improve plant nutrition or stimulate plant growth by phytohormones. 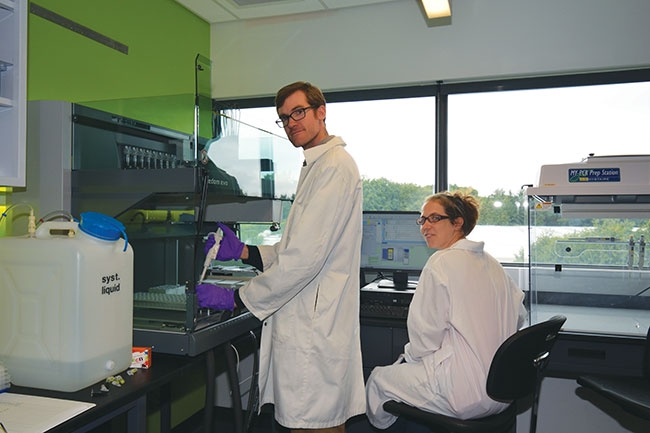 Gaining a better understanding of the influence these organisms have on each other and the complex webs of interactions that can be enhanced to optimize crop production is important for canola and other crops in Western Canada.

Researchers Marc St-Arnaud and Mohamed Hijri at the University of Montreal, and collaborators with Agriculture and Agri-Food Canada in Western Canada and Quebec are studying the root and rhizosphere microbiomes of canola. Through various projects, researchers are trying to better understand the core root microbiome of canola, and whether or not it is distinct from other crops such as wheat and pea. They are also trying to determine agronomic practices and crop rotations that favour the establishment of a beneficial root microbiome in canola-based rotations to optimize the efficiency of plant production. Field experiments have been conducted at several locations in Western Canada, while most of the DNA, molecular genetics and other lab analysis are conducted at the University of Montreal.

“Results from recent projects have shown that the microbiome associated with crops is very different between key species,” St-Arnaud explains. “Crop diversification also has a significant impact on the microbiome.” In one recently completed project, graduate student Jean-Baptiste Floc’h, compared the results of field experiments conducted in 2013 and 2016 at three locations in Western Canada: Lacombe, Alta., Lethbridge, Alta., and Scott, Sask. The study was based on the canola phase of an existing long-term five cropping system field experiment, including one of two types of canola (Roundup Ready and Liberty Link), and compared continuous canola to very diversified rotations. The results showed that crop diversification has significant impact on the structure of rhizosphere fungal communities. “We also discovered and described a canola core microbiome, which included a very diverse number of microbes that have a positive correlation to canola yield.” Floc’h will be continuing research into the canola microbiome through a PhD program started in the fall of 2018.

“One of our priorities is to find a way to increase the proportion of beneficial organisms, through agronomic practices such as seeding density, fertilizer rates or other treatments, and their effect on the microbiome population. “We are also studying the effect of crop rotation and intensity on the beneficial or detrimental organisms in the microbiome,” says St-Arnaud. “As part of this study, we are also trying to look at all of the microbes associated with the canola rhizosphere, not only to identify which organisms are there but also which ones are the most active and what they are doing in the soil. The beneficial nature of the micro-organisms is being determined based on identity and abundance of important functional genes, as well as on crop performance. One other factor that has shown to have a significant influence on the combination of micro-organisms in the soil is the effect of rainfall and temperature. We have found big differences between a rainy year and a dry year, particularly in areas like Swift Current where rainfall can be variable. Therefore, understanding the microbiome population and proportion of beneficial organisms under variable field conditions is also a priority.”

In another project conducted in 2014 using a similar long-term cropping system at three locations in Western Canada (Lacombe and Beaverlodge, Alta., and Brandon, Man.), researchers compared the canola root-associated microbiome with those of wheat and pea grown alongside canola in the same fields. They also compared the effect of selected agronomic treatments, including two canola seeding rates (recommended rate and 150 per cent of the recommended rate) and two fertilizer rates (recommended rate and 150 per cent of the recommended rate) on the canola microbiome. The effect of crop and treatment on the diversity of bacterial, fungal, and archaeal assemblages associated with the roots and rhizosphere soil was assessed. The results showed that canola has a core microbiome distinct from those of wheat and pea and that the root and rhizosphere microbiomes significantly responded to the agronomic treatments. Researchers also found treatment-specific changes in the relationship between bacterial and fungal microbiome members.

“Along with crop rotation, we also found that different crop cultivars can be an important factor influencing the microbiome,” Hijri adds. “Farmers should be aware that some cultivars respond better than others in terms of biodiversity of the microbiome, and will want to consider that in cultivar selection. As well, unlike most other crops, canola is one of the rare plants that cannot form mycorrhiza and the symbiotic association between the plant roots and soil fungi. Therefore, the impact of more intensive canola rotations may also reduce the proportion of other important beneficial fungi more than first considered.”

Other research underway is a focus on studying the microbial genes involved in nitrogen (N) dynamics in canola production.
Hijri explains, “nitrogen can be a very costly input for growers, and the N cycle is a very dynamic and complex cycle in soils. We are trying to develop a better understanding of the microbes involved in the N cycle, and how that knowledge can be used to improve N use in canola production. The project is in the early stages, but the results so far are promising and we anticipate results should be available in the coming year.”

Although many of the microbes are beneficial, there are also some detrimental ones in the soil. For example, the Olpidium brassicae group, which was identified in early studies in the canola microbiome in Western Canada, contains serious pathogens to canola and their rotation crops that are still not well understood. “We are trying to better understand the taxonomy, the host range and the potential role of O. brassicae-related species in plant health, and the interaction of O. brassicae and allied species with other bacteria and fungi in canola. In an earlier study, we did find that O. brassicae was significantly reduced in the roots of canola planted at higher seeding density. Ultimately we hope to find a way to encourage the good microbes in the microbiome to limit the impact of detrimental ones such as Olpidium species in canola production systems.”

Other efforts are underway to evaluate strategies that can be used to improve crop production, such as interventions with beneficial microbes, for example using inoculants at seeding, or other strategies such as developing soil amendments with commercial microbes that can boost or stimulate indigenous microbial communities to help increase the diversity of microbes. “Our research so far has confirmed that the more diversified the crop rotation system, the more diversified the microbiome, which helps make canola more resistant to new organisms or increase beneficial organisms,” St-Arnaud says. “Along with crop diversity, we expect that some agronomic practices will help improve crop performance. Combined with potential soil amendments and commercial microbes currently being explored, we will continue to study strategies that growers will be able to use to enhance the canola microbiome to help improve crop performance and health and optimize crop production.”