There was a time on the Prairies when heat and lack of moisture stress were more common than excess moisture and cool temperatures. Indeed, the movement to direct seeding and no-till was in response to droughts in the 1980s and early 2000s. Even though the last decade has seen more challenges with excess moisture than lack of moisture, for some growers the start of the growing season in 2016 was a reminder that dry conditions are never far off. With that in mind, a review of several research studies reinforces the value of surface residue on root heat stress and crop yield. 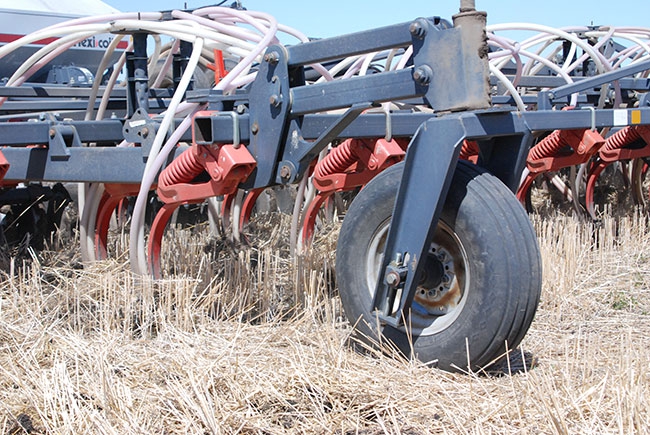 “In studies, we have seen that wheat growth is affected more by heat stress in roots than in the shoot. The cooling effect of no-till on soils can reduce the risk of root heat stress and improve yield compared with conventional tillage,” says Hong Wang, a research scientist with Agriculture and Agri-Food Canada (AAFC) in Swift Current, Sask.

Wang’s research stretches back to 2000 through 2003, during a central Alberta study conducted at the height of one of the last drought episodes. The drought of 1999 through 2004 was the worst drought in at least 100 years, according to the Drought Research Initiative, with well below normal precipitation levels in areas of Alberta and Saskatchewan that lasted more than four consecutive years.

In the Three Hills research, consistently lower soil temperatures were observed at five and 10 centimetre (cm) depths during the entire growing season each year. At the grain growth stage, no-till mitigated heat shock (defined as temperatures greater than 32 C at five-cm soil depth) occurred in 2001 and 2002 under conventional till but not under no-till. The root heat stress index (HSI) in no-till (calculated as accumulations of hourly soil temperatures greater than 20 C) was reduced every year when compared with conventional tillage.

By reducing root heat stress, especially during the grain growth stage and with slightly increased pre-seeding soil moisture in no-till plots, no-till increased above ground crop growth by 33 to 160 per cent and grain yield by 18 to 147 per cent every year except 2003, when heat and water stress were relatively mild. Over the four years, the no-till system produced an extra 26 bushels of wheat.

“The improved microclimate conditions near the soil surface caused by retaining surface residue may serve as a basis on which the benefits of no-till practices on promoting root growth, increasing aboveground biomass accumulation and enhancing crop yield can be further explored,” Wang says.

Other research supports Wang’s findings. Brian McConkey at AAFC Swift Current has demonstrated the benefits of tall standing stubble on microclimate and yield. A three-year study during the dry 2001 to 2003 period at Swift Current looked at how seeding canola, pulse, and wheat into cultivated, short (about 15 cm high), tall (about 30 cm high), and extra-tall (about 45 cm high) standing stubble affected yield. Yield and overall average water use efficiency increased linearly as stubble height increased to 45 cm.

In a three-year project that ran from 2008 to 2010, Herb Cutforth at AAFC Swift Current found that, similar to cereal stubble, spring wheat and canola yields and water use efficiencies were significantly greater for crops grown in tall standing canola stubble when compared to the cultivated stubble.

Building on these studies, University of Manitoba graduate student Michael Cardillo looked at tall stubble effects on canola for 11 site-years across Western Canada. Canola yields were significantly higher in the intact tall and short stubble treatments compared to treatments where the stubble was damaged by snow-flattening or seeding damage.

These studies suggest growers need to look at their situations one year and one field at a time. If fields are dry at harvest, leaving stubble standing as high as is practical may help preserve yields if the weather is dry the following growing season. If fields are wet, residue management with tillage or some sort of straw management will be critical in helping to get good stand establishment.