Canola contributes around $26.7 billion annually to the Canadian economy, according to figures from the Canola Council of Canada. However, most of its value lies in the oil, while canola meal has traditionally been considered a byproduct suitable only for animal feed. 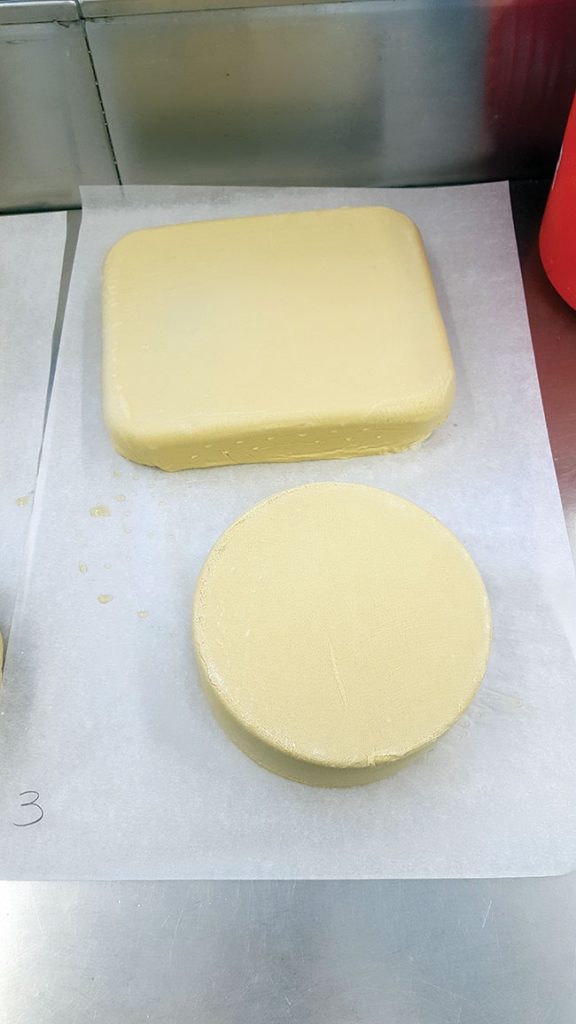 A “canola tofu” round with characteristics similar to a silken soy-based tofu. Turning canola meal into a high-value “co-product” with applications in human food and feed.

This might change with the start of a new research project, which just received $876,000 in Agriculture and Agri-Food Canada, Canola Council and grower association cluster funding. The project aims to boost the protein content and quality of canola meal, turning this byproduct into a high value co-product of canola oil.

Researchers on the grant include Rob Duncan, associate professor and breeder in the University of Manitoba’s department of plant sciences, James House and Rotimi Aluko in the university’s department of food and human nutritional sciences, Agriculture and Agri-Food Canada collaborators in Saskatoon including Isobel Parkin, Janitha Wanasundara and Sally Vail and Lee Anne Murphy with Murphy et al Inc.

“We’ve gotten some smaller funding but this is our biggest funding source to date going into protein related traits and development,” Duncan says. “This is a big step for the entire industry to add value to the crop.”

Duncan says the team’s research will be geared toward increasing the functional and nutritional value of canola meal as a feed source, and perhaps also a food product for human consumption.

Over the grant’s five-year term, Duncan’s team will focus on three objectives. They’ll start by looking for diversity within the brassica family to find sources of improved protein quality, digestibility, cruciferin and napin in the natural germplasm of canola and its Brassicaceae relatives, as well as oil content, fatty acid content and fibre, among other qualities. Once they have gained this information, the team will look at the genotypic information of this germplasm to discover what factors control the protein quality and digestibility.

The team’s third goal is to analyze how these sources of genetic diversity interact with canola processing methods, and how that interaction impacts protein quality and digestibility.

“Is this cultivar better for digestibility? Does this cultivar have different cruciferin or napin levels? Does one cultivar handle processing better than others?” Duncan asks. “As a breeder, what I’m interested in is understanding whether cultivar A or cultivar B has better protein qualities.”

Adding value to the industry
Duncan’s priority as a researcher has always been finding ways to extract value from the whole canola plant.

“From an economic and an environmental standpoint, the more value we can extract from the plant, the more benefit to the country, the industry and to the farmers growing that plant,” he says.

Duncan says it’s possible to couple high-value quality traits in one canola cultivar, and in fact this has already been done. For example, DowDuPont’s ProPound canola, which is set to launch next year, contains a high-value meal trait that is combined with their specialty oil trait.

But Duncan’s research looks at another kind of efficiency. His research program has been focused on canola’s two main seed storage protein types – cruciferin and napin. Both types have good applications in food industries, but because testing has been done on the composite level, drawing from a mixture of genotypes, no one genotype has been bred for high cruciferin and napin.

“The efficiencies are poor,” Duncan explains. “If we could offer a genotype that will constantly contain high cruciferin or napin, the protein isolates could be used in protein bars and beverages.”

A “canola tofu” round with characteristics similar to a silken soy-based tofu.

There is, however, only so much room in a canola seed. If oil content is increased, protein content decreases, says Duncan. “But we’re not just emphasizing content in this research, rather the quality. If you have really high oil content that’s not to say that you couldn’t have high cruciferin in the resulting meal.”

Because this team is just starting on this protein research, Duncan says it could take more than ten years to bring a new cultivar to market.

Food applications
The third focus of Duncan’s team’s project – understanding how processing methods affect quality – is just as important as the initial trait discovery process, he says. If a variety has improved protein quality traits, but those traits break down during heating in processing, you’ve gained little.

According to Lee Anne Murphy, vice-president of agricultural research firm Murphy et al Inc., who is part of the same cluster project, this exact problem is a key obstacle facing stakeholders interested in upping protein content in canola meal.

“High heat damages the ability of the protein to be used in food formats. That is why the cluster project’s focus on understanding the impact of processing on protein quality is so important,” she says.

Murphy’s company has a partnership with the Manitoba Canola Growers Association that has worked on characterizing oil, press cake (meal) and co-stream products from cold pressed canola.

“One of our discoveries was that the protein from canola meal can be used in food formats including a ‘canola tofu,’” she says. “We’ve also developed prototypes that mimic the hardness and elasticity of silken soybean tofu, as well as a shelf stable powder version and a meat mimic – think deep fried nugget.”

Murphy says all these applications can be made using equipment that the soy industry has used for decades, which means existing plant-based food manufacturers can expand product offerings while minimizing capital investment.

Canola meal has a largely untapped potential for use in food ingredients and food products, Murphy claims, and unlike many other novel plant proteins it’s readily available in large volumes.

“We hope the feedback on end uses will help focus and direct the research and discovery efforts to shorten the time to commercial adoption,” Murphy says.

Involving growers in this work from the beginning is key to the project’s success, she adds. “We hear over and over that the major obstacle to adding value is a reliable, consistent supply of high-quality raw material.

“With canola, we have that as the starting point.”