Just like you inoculate legume seeds with a rhizobial inoculant, one day you might inoculate canola seeds with a plant-growth-promoting fungus. Greenhouse experiments in Alberta are showing that a fungus called Piriformospora indica can boost canola performance, providing benefits like increased yields, reduced fertilizer needs, and increased tolerance to cold and drought. Now the research team is testing this promising inoculant in the field.

“Piriformospora indica was discovered relatively recently in northwest India, and since then has been found in other parts of the world,” notes Janusz Zwiazek, a professor of plant physiology at the University of Alberta, who is leading the research. Since Piriformospora indica’s discovery about two decades ago, researchers have been learning more and more about this interesting fungus. Zwiazek expects it will likely be classified as a type of mycorrhizal fungi.

He explains that Mycorrhizal fungi are a group of fungi that colonize plant roots, forming mutually beneficial relationships with their hosts. “Mycorrhizal fungi are very common. Probably more than 90 per cent of plant species are associated with mycorrhizal fungi in nature. Especially in soils that are poor in nutrients such as phosphorus and nitrogen, these fungi can mobilize these nutrients in the soil and make them available to plants. Mycorrhizal fungi can also protect plants against different environmental stresses such as drought, pathogens, and so on,” says Zwiazek.

“But the exception is the family of Brassicaceae, the cabbage family of plants, to which canola belongs. Cabbage family plants typically don’t form mycorrhizal associations. So they don’t have the added benefit that many other plants receive from having these helpful fungi that can do so much good.”

Luckily for canola growers, Piriformospora indica is a bit different from the average mycorrhizal fungus in a couple of ways.

“Researchers have discovered that Piriformospora indica is capable of forming associations with the roots of a number of cabbage family species,” notes Zwiazek.

Also, most mycorrhizal fungi have to be cultured in a plant host, but Piriformospora indica can be grown in a pure culture without a plant host, so it is easier to grow for commercial production of inoculants. And previous research has shown that Piriformospora indica has the ability to provide multiple benefits to host plant species, such as improving nutrient uptake, increasing stress tolerance, improving disease resistance, and enhancing plant performance.

With all those things going for Piriformospora indica, Zwiazek was keen to see how it might work with canola.

The first phase of the project was done in growth rooms where all the environmental conditions, such as temperature, light and moisture, were strictly controlled. The experiments were done under sterile conditions to exclude the possible effects of any other microbes.

“We inoculated canola plants with a fungal culture of Piriformospora indica, and we studied the effects on plant growth under different environmental conditions, which we controlled in the growth rooms,” he says. Zwiazek’s team evaluated the effects of such things as temperature stress, low nitrogen and phosphorus levels, drought and flooding stress, and salinity stress on canola growth characteristics and yields, with and without the fungus.

The biggest challenge in the project’s first phase was to develop a practical way to inoculate canola plants with the living fungus. Zwiazek explains, “In many cases, [commercial] mycorrhizal associations and mycorrhizal technology have failed because it is very difficult to inoculate the plants on a large scale, to maintain the inoculum alive long enough and develop the conditions which could be used on a commercial level and applied in practice.”

After testing various Piriformospora indica inocula and procedures, the project team has developed an innovative inoculum and protocol that are practical for applying the fungus to seeds in commercial operations. They are currently applying for a patent for this technology.

The project’s first phase is largely completed, and the results are very promising.

“The most important findings are that the fungus can colonize canola plants quite easily and quite effectively, and it can be quite effective in increasing the growth and yield of canola, especially under lower phosphorus levels,” says Zwiazek. “Also, the fungus makes the plants more resistant to low soil temperatures and low air temperatures, and to drought stress conditions.”

Now the next step is to see how well Piriformospora indica works under field conditions. So in 2016 the project team started testing the inoculant in field trials.

In these trials, Zwiazek’s team will be looking at the effects of different soil amendments (including different soil organic matter and growth-promoting bacteria) on canola growth and yield, with and without the inoculant. As well, they are doing some tests in collaboration with Mary Ruth McDonald from the University of Guelph and Habibur Rahman from the University of Alberta to see how the fungus affects the canola plant’s ability to resist clubroot and possibly other canola pathogens.

“The results of the greenhouse studies are very exciting. But everything has to be really tested in the field – this is the ultimate test. Hopefully in two or three years we’ll have a pretty good idea of how the fungus performs under field conditions, and how much farmers can actually benefit from it.” 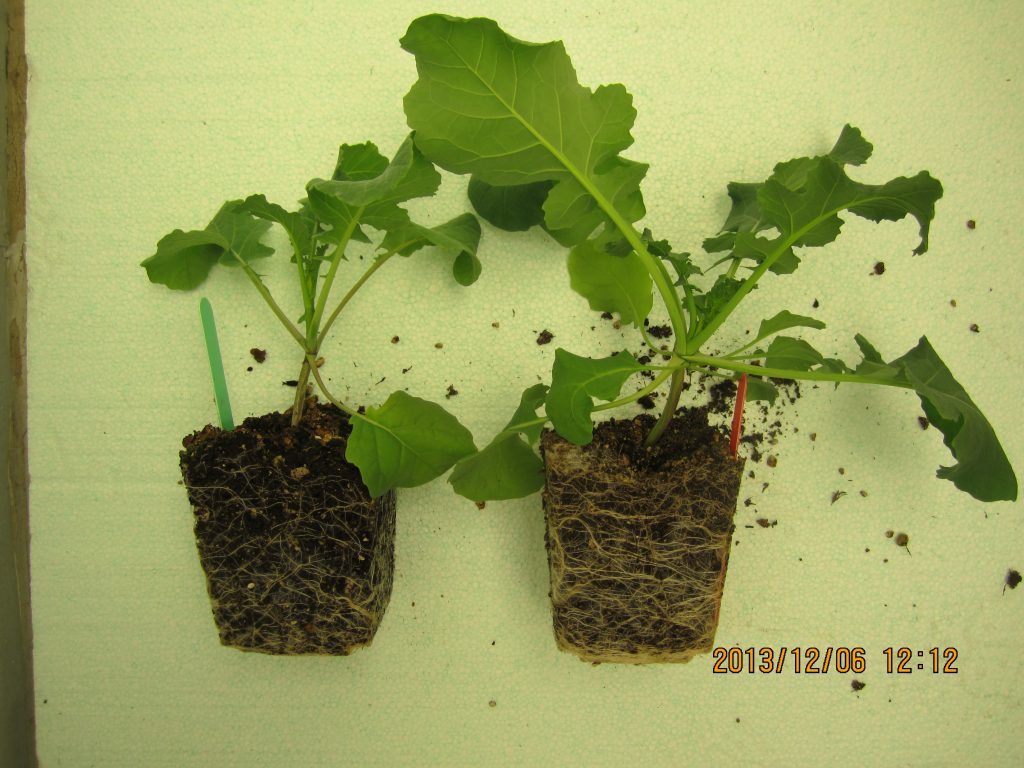