Seeding dates vary across regions and between years, depending on weather, soil temperatures and other factors. There is a lot of research that shows an earlier seeding date usually translates into a higher yield potential for many crops.

“Seeding early normally translates into higher yields; however, it doesn’t necessarily mean that if you end up seeding later that you will have lower yields,’ explains Pamela de Rocquigny, provincial cereal crops specialist with Manitoba Agriculture, Food and Rural Affairs (MAFRI) in Carman. “However, there are a lot of things that happen between when a crop is planted and when it is harvested. While important, planting date is only one of many yield-influencing factors.”

In Manitoba, cereals are usually seeded first because they germinate at lower soil temperatures and are more tolerant to early spring frosts. Grain corn tends to be seeded early because it is a longer-season crop. Flax and canola usually follow, with crops such as soybeans seeded last. Seeding crops such as canola too early can put them at risk of a spring frost. Seeding early can also affect crop quality. “Seeding early tends to mean a crop is harvested in a drier time frame,” adds de Rocquigny. “As harvest moves into September or later, we tend to get showers starting that can lead to downgrading. Early maturity can also reduce the risk of early fall frost resulting in crop damage and/or downgrading of quality.”

Data from Manitoba Agricultural Services Corporation (MASC) suggest that as seeding moves into the late stages of May, some crops have greater yield potential than others. The data shows that spring-seeded cereals, peas and corn yields have dropped to 85 percent of normal yield potential by the last week of May. However, canola, soybean and edible beans haven’t lost a lot of yield potential. If seeding is delayed into June, be sure to consider crop insurance deadlines.

Research has consistently shown that uniformity of seed placement (depth) is one of the first things that is lost once planting speeds exceed 5 mph. “In a spring wheat crop, trying to time a fungicide application for Fusarium head blight suppression, for example, is much easier if the crop is all at one stage,” says de Rocquigny. “A crop is obviously never perfect across a whole field, but anything that can be done to improve uniformity will help in the long run.”

In situations where crops are seeded later due to weather or other factors, there are still things growers can do to improve the yield potential. “If you have pushed the seeding date a bit later, look at variety selection and maturity dates,” explains de Rocquigny. “Increase the seeding rate a bit, which will decrease the number of tillers, and hopefully get everything a bit more advanced in terms of maturity.” At the end of the year, if everything else goes right throughout the entire season, there is no reason growers can’t still get a 40-bushel wheat crop, which is around 10-year average.

Most growers are ready to go in the spring and seed as soon as the weather allows. “In 2010 we had producers actually seeding in April, with most of their cereals seeded by May 1,” says de Rocquigny. “We were getting calls asking if it was too early to seed. Typically May 1 is the usual seeding date, but if the seedbed conditions are good, it’s dry and the soil temperatures are right, then seeding cereals early should be no problem. If soils are wet and cold, it may be better to wait. With canola or other sensitive crops, it may be better to hold off until the risk of early spring frosts is over.”

For 2012, the season is shaping up for a more normal spring than in 2011, which started off with very wet fall conditions in 2010, followed by a very wet spring. The fall of 2011 was fairly dry, and de Rocquigny hopes that, depending on winter snows and spring rains, seeding conditions in 2012 will be closer to normal.

“The most important strategy for growers is to have a plan in place ahead of time, so you are prepared to modify or deviate from that plan no matter what the weather does,” says de Rocquigny. “Most growers spend time in the winter pencilling out costs of production and deciding which crops and rotations will make them the most money. That way they are prepared to make changes if necessary as the spring season approaches. Having a plan, being prepared and seeding early will set up the year for higher yield potential and better-quality crops.” 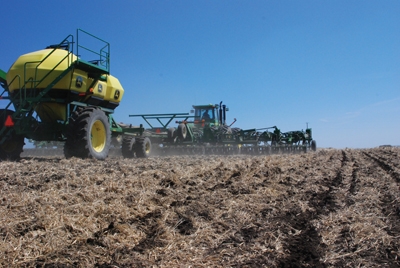 
Related
Evaluating the effect of hail damage on soybean maturity, yield and quality
Heat stress effect on pea pollination and seed set
Effect of weeds on soil AMF and agronomic traits in organic wheat
Closing the yield gap in Alberta