Arbuscular mycorrhizal fungi (AMF) are among the most common and ubiquitous soil microorganisms in almost all soil systems. They contribute to nitrogen and phosphorus absorption and translocation, alleviation of water stress, resistance to soil-borne pathogens and improvement of soil structure. Several studies have reported organic farming systems tend to have more diverse AMF communities. 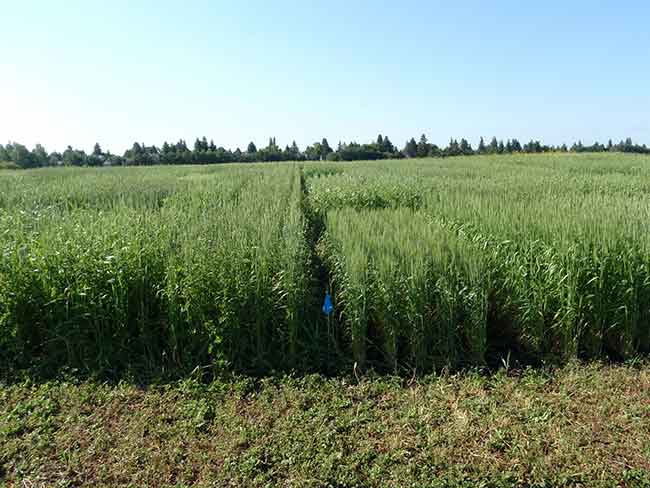 The weedy plots (left) had a higher percentage of AMF than the weeded plots (right). Arbuscular mycorrhizal fungi (AMF) are among the most common and ubiquitous soil microorganisms in almost all soil systems.

This study was designed to increase knowledge of wheat-weed-AMF community interactions. The specific objectives were to examine potential differences in soil microbial communities between weeded and weedy environments in organic wheat fields, and to examine the weed competitive ability of 13 Canadian spring wheat cultivars grown in the organic hand-weeded and weedy environments.

There was greater weed biomass in the weedy treatment. The average dry weed biomass at harvest was 2.15 and 1.87 t/ha for the weedy treatment in 2010 and 2011, respectively. The weeded treatment had an average dry weed biomass less than 0.03 t/ha in both years. We observed five main weed species in our weedy plots: Canada thistle, shepherd’s-purse, wild buckwheat, lamb’s-quarters, and field pennycress (stinkweed); and three weed species in the weeded plots: shepherd’s-purse, wild buckwheat and field pennycress.

Using combined data from 2010 and 2011, the per cent contribution of AMF to total PLFA was greater in the weedy than in the weeded treatment. Other soil microbial groups, species richness, diversity index and evenness were not altered in the weedy treatment and the weeded treatments. This result reinforces the notion that weeds are important for AMF development. The interaction between AMF communities and the density and species makeup of the weed population remains unclear. Further investigation is required to assess the function of mycorrhizal and non-mycorrhizal weed species in AMF proliferation.

*Editor’s note: This article is based on the Canadian Journal of Plant Science’s “Best Agronomy Article” for 2015. The journal article is open source to the public and can be downloaded in its entirety at www.nrcresearchpress.com/doi/abs/10.4141/cjps-2014-284.

The weedy plots (left) had a higher percentage of AMF than the weeded plots (right).