Severe weather and hail events in field crops seem to be more prevalent over the past few years. In 2015 and 2016, The Manitoba Agricultural Services Corporation (MASC) estimated crop-hail loss payments to Manitoba producers from all sources at $54.1 million and $77.7 million, respectively. 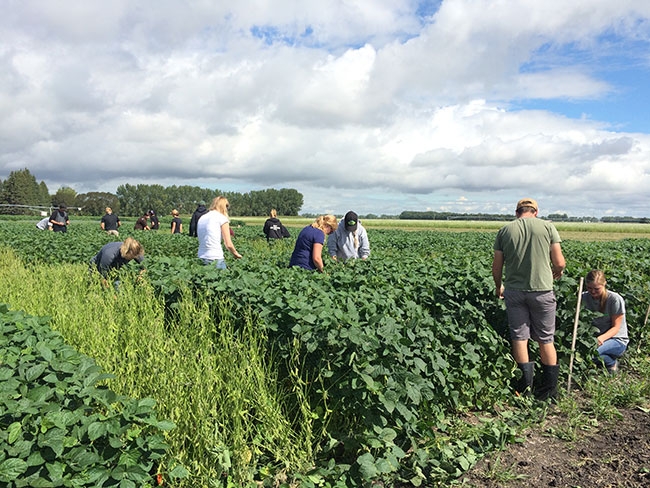 Field crew collecting data in soybean trials in Manitoba. Severe weather and hail events in field crops seem to be more prevalent over the past few years.

Those payments were more than double in 2015 and triple in 2016, the average annual crop-hail loss payments over the previous 10-year period, which MASC estimates at $24 million from all sources on average. With all of these claims, growers and insurance providers would like to see crop loss procedures based on local conditions and data. In an effort to help close the gaps and update crop insurance hail damage adjusting procedures to reflect the unique soybean growing conditions in Manitoba, Kristen MacMillan, soybean and pulse research agronomist at the University of Manitoba has initiated a four-year project.

“This research project was really sparked by questions from farmers back in 2013,” MacMillan explains. “After a few severe weather events, farmers started to recognize that crop loss procedures were not necessarily reflecting what they would predict or were seeing as the crop progressed throughout the year. Early season events seemed to raise the most questions, and they started asking me to come to the field and take a look at the situation with them.”

MacMillan began by looking into the scientific research that was backing crop insurance procedures and realized that all of the data for soybeans was based on research done in the U.S. “This made sense because although soybeans have been grown in Manitoba for the past 15 years, it is only the last five years that the acreage has really expanded and more hail events have farmers noticing these issues. We realized we needed more local data to help address the inconsistencies, disagreements and crop loss procedures in Manitoba, which led to the launch of this project.”

The research project was initiated in 2015 at two Manitoba locations, Portage la Prairie and Minto, to reflect both eastern and western growing areas. The project was funded by the Manitoba Pulse & Soybean Growers Association (MPSG), Growing Forward 2 and the Western Grains Research Foundation (WGRF). MacMillan explains this is a large experiment with several components. The objective of the project is to determine the effect of simulated hail damage at various growth stages on soybean maturity, seed yield and quality. The ability of soybean to recover from hail damage (defoliation, node removal, stand reduction etc.) depends on several factors including timing and severity of damage, and environment. One unique factor to Manitoba (and Western Canada) is the short growing season that reduces the time to maturity that soybeans have when affected by hail events.

“In the study we are measuring two types of hail damage: node removal (or stem breakage) and defoliation at multiple levels of injury,” MacMillan says. “The effect of hail event timing on yield at early, mid and late season stages is also being measured. Rather than trying to use a simulation model where a random pattern and level of damage would be imposed on the treatments, we are actually going in and doing hand removal to simulate damage. This provides for more precise measurements and enables us to quantify the impacts on crop growth and crop yield.”

Research data was collected from field trials in 2015 and 2017. Ironically, both sites were completely hailed out in 2016; Minto in July and Portage la Prairie in August.

“The results so far are very preliminary, but the results from 2015 have identified some gaps in information specific to Manitoba,” MacMillan says. “There are certainly discrepancies in yield loss percentages between the existing Manitoba crop loss procedures and what we are seeing in the trials. In some cases the difference is greater than 10 per cent, so that is an area that needs to be updated. There are also more gaps in defoliation damage, particularly when there are high levels of defoliation early in the season. Node loss damages were updated this year, still based on U.S. data, but the gap is much smaller. So there certainly are some areas that still need fine tuning. Another area that will be interesting for Western Canada is potential delays in maturity.”

One of the largest data gaps seems to be when there is complete node loss in the vegetative stage. MacMillan notes this was particularly prevalent in 2017 where there were quite a few hail events in June in Manitoba. In her trials, when all of the nodes were removed during the V3 stage, there were fairly significant yield losses, which are higher than currently predicted. Along with yield data, other notes on plant productivity including pods per plant and seeds per plant are being collected to help determine where the yield loss is coming from. For example, there are differences between hail damage during pod development and seed development. These observations are related more to plant physiology, where loss of photosynthetic tissue affects production and movement of carbohydrates for yield formation.

Growers have also been questioning the impact of hail damage on maturity. This is a factor that is more unique to Manitoba and Western Canada because of the shorter growing season compared to the U.S. mid-west. In some of the trials, MacMillan has detected a seven to 10-day delay in maturity with some levels of hail damage, and will be able to provide better results at the end of the project. She has also added some novel components to the research including looking at impacts of hail damage and maturity on seed quality, including oil, protein, seed size, green seed count and other factors.

“I am also working directly with hail adjusters and growers through training opportunities and field events,” MacMillan says. “The adjusters are looking to this research to help answer questions for them. They see the frustrations of the growers and they are eager to increase their knowledge, as some have little experience with soybeans as compared to other crops such as wheat or canola. In August 2017, MASC held a training session for 120 adjusters in Manitoba where I provided training on identifying and understanding soybean growth and development in Manitoba. They can use this knowledge when they go to a field that has been damaged, in addition to the physical clues they use to identify the crop stage at the time of hail damage. For both adjusters and growers, the training, information and filling in the research gaps can help clarify situations and potentially reach a settlement earlier rather than deferring a decision. Deferred decisions can have agronomic, economic and environmental costs and implications for growers such as weed control but also soil erosion risks.”

The project includes one more field season planned in 2018 to collect data, and the final research results are expected to be available in 2019. Once the productivity of hail-damaged soybeans is determined, the current crop adjusting procedures can be updated. This will improve efficiency and accuracy, and in some cases reduce the need for further production and energy costs in fields that do not have the potential to recover.

“MASC will be able to use the information to develop more accurate and consistent crop loss measures specific to Manitoba and western Canadian conditions,” MacMillan says. “Growers can be more confident working with their hail insurance providers in terms of the procedures being used and the settlements they receive as more fair and accurate, knowing the decisions are based on Manitoba research.”

“The information will also be an asset for all of Western Canada, as other provinces such as Saskatchewan and Alberta, which are currently relying on the same U.S. data as Manitoba. The project has been conducted in co-operation with the MASC, and the information will be made available to the national crop insurance organization and other private insurance providers as well.”