May 8, 2012
By Richard Engel Clain Jones and Tom Jensen

Surface application of N fertilizer, in particular urea, is a common management practice for dryland producers growing winter wheat in Montana and other portions of the semiarid northern Great Plains.  Seeding usually occurs in mid- to late-September depending on weather conditions, then N is broadcast applied during the late fall, or winter if the snowpack is shallow (e.g. ≤ 15 cm), or early spring as long as fields will allow spreading equipment to drive on the surface without causing ruts. This is usually on cold soils (e.g. < 5°C or 41°F) that are either dry at the surface, frozen, or covered with a modest snowpack as described above. The practice of fertilizing fields in a separate operation is done primarily to expedite seeding operations. Although most modern air-seeders, are capable of side-banding N fertilizer below the soil surface where it is less susceptible to volatilization, many Great Plains growers will not utilize this practice as it slows planting operations. This is significant because individual farmers may need to seed 1,000 ha, or more, of winter wheat over a short interval of time resulting in considerable time constraints. In addition, warmer soil conditions at seeding allow the urea to be hydrolyzed and the resulting NH4+ converted to NO3- during the fall. The resulting NO3- is susceptible to denitrification if saturated soil conditions occur at snowmelt the following spring.

Volatilization risks associated with surface-applied urea have been assumed to be minimal if applications were made during cold weather conditions. This opinion is founded, in part, on research and extension literature that often characterizes NH3 losses or risks as being greater at warm temperatures, and by inference, small at cold temperatures. Numerous studies have investigated and reported on NH3 volatilization from surface-applied urea; however, we know of no study that has specifically targeted its measurement from cold soil with temperatures < 5˚C. In 2008 we began a study that focused on quantifying NH3 losses from surface-applications of urea and NBPT-coated urea performed during late-fall to early spring. The purpose of this article is to share a portion of the results obtained from this project. Ammonia volatilization losses were quantified using a micrometeorological mass-balance approach with circular plots (40 m dia.), a center mast, and samplers (Leuning et al., 1985) that provided for continuous measurement of NH3 losses. In all trials urea was surface broadcast applied to wheat fields at rate of 100 kg N/ha.

Urea was treated with NBPT (1 g/kg) using a liquid Agrotain™ formulation. Ammonia losses were followed over 8 to 10 wks by exchanging the samplers approximately once per week (see Engel et al., 2011 for details on gas sampling methodology and NH3 loss calculations).

Ammonia Losses from Urea
Urea was surface applied to soils with temperatures < 5°C in eight campaigns. The total cumulative NH3 loss, expressed as a percentage of the applied N rate (100 kg N/ha), averaged 26.3% for these trials but was quite variable among sites (Table 1). The largest cumulative NH3 loss, 44.1% of the applied N, occurred during Campaign 10, which was conducted on a Brocko silt loam (pH 8.4) soil. The total cumulative NH3 loss exceeded 30% of the applied N in three trials conducted on acidic soils, including Telstad–Joplin loam (pH 5.5, Campaigns 3 and 4), and Phillips–Elloam clay loam (pH 6.4, Campaign 5). A commonality of all large NH3 loss campaigns (> 30% of applied N) was that fertilizer applications were made to a high-water-content soil surface that resulted in the dissolution of urea granules. Precipitation events that followed were ≤ 5 mm and scattered at least through the first 30 d after fertilization. Conversely, comparatively small NH3 losses (i.e. < 10% of applied N) were observed during Campaigns 1 and 11. These trials were characterized by urea applications to dry soil surfaces followed by a large precipitation event (> 18 mm).

Many studies on NH3 volatilization from fertilizers have noted that large NH3 losses are associated with an initially wet surface soil followed by several days of slow drying with little or no precipitation; and that N losses from urea are mitigated when sufficient rain or irrigation, typically 13 to 25 mm, occurred to move the N into the soil profile (Hargrove, 1988). Our results are consistent with this review; however, they are unique in that we found cold soil temperatures did not provide protection against realizing large NH3 losses if the surface water content was high at the time of fertilization with little or no precipitation after application. For example, NH3 losses > 10% of the applied N rate occurred over the first week post-fertilization at Campaigns 3, 4, and 5, even though mean daily soil temperature (1 cm) over the sampling period averaged only 0.8, -0.7, and 1.2°C, respectively.  Particularly large NH3 losses (22.4% of applied N) were observed over the first week at Campaign 5.  Field conditions at the beginning of Campaign 5 were characterized by a frozen soil surface with a trace amount of snow, and a soil water content (0 to 8 cm) near saturation (θv = 50%). During the first week, no precipitation fell and the volumetric soil water content fell to 24.6%.  Similarly, large cumulative NH3 losses equivalent to 24.3 and 20.7% of applied N were observed after urea was broadcast onto to field sites with modest snowpack at Willow Creek and Denton, Montana (Figure 1). The period of greatest emission activity followed the disappearance of the snowpack when the surface was drying, and soil temperatures were still cold. At Willow Creek this was associated with the 4th and 5th week post-fertilization when soil temperatures averaged -1.5 and 0.5°C. At Denton, this was associated with the 2nd week post-fertilization when soil temperatures averaged 1.3°C.

Mitigation of NH3 Loss from Urea by NBPT
The addition of the urease inhibitor NBPT to urea was effective in reducing NH3 loss in all trials.  Total cumulative NH3 loss with NBPT averaged 9.7% of the applied N rate, a 63% reduction in volatilization compared with untreated urea. Mitigation of NH3 volatilization from urea by NBPT has been attributed to a number of factors including a moderation of the soil pH rise that results with the production of ammonium bicarbonate (NH4HCO3) (Clay et al., 1990; Christianson et al., 1993); reduction in concentration of NH4+ in the soil solution around the fertilizer placement microsite (Christianson et al., 1993), thereby affecting the NH4+(sol) ↔ NH3(sol) ↔ NH3(g)  equilibrium; and inhibition of hydrolysis thereby providing more opportunities for precipitation to infiltrate urea deeper in the soil where N is less susceptible to volatilization (Grant et al, 1996). The benefit of NBPT was typically limited to 2 weeks on acidic soils (i.e. after 2 weeks post-fertilization NH3 losses were similar for the NBPT treated and untreated urea (Figure 1b).

However, the benefit of NBPT persisted longer at the Willow Creek field site with a calcareous soil, suggesting that degradation of NBPT and/or its metabolites may have occurred more slowly at high pH. Although this effect has not been documented previously in the field, a lab incubation study found degradation of NBPT and its oxygen analog to occur more slowly in alkaline than acidic soils (Hendrickson and Douglass, 1993).

Implications and Management Recommendations
Commercial fertilizer applicators and growers in the semi-arid northern Great Plains have long assumed that surface-applied urea was not susceptible to large volatility losses if applications were made during cold weather months. The results from this study indicate this assumption may not be valid, and that significant losses of NH3 from urea may occur even though applications were made to low temperature soils (< 5°C). In the semiarid northern Great Plains, fertilizer applications that occur during the late fall, winter, or very early spring will often be made to soil surfaces that are cold or frozen, high in water content, and sometimes covered with a modest snowpack. Urea applications under such conditions appear to be susceptible to volatility losses, particularly after the surface thaws and dries. To minimize volatility losses, growers should probably wait until the soil surface is sufficiently dry such that dissolution of the urea granules will not result. If a large precipitation event (> 18 mm as either rain or snow) is received within a few days after urea is applied to a dry soil surface then volatility losses will be < 10% of the application rate. The urease inhibitor, NBPT, applied at a rate of 1 g/kg urea reduced volatility losses by approximately two-thirds compared to untreated urea. Use of NBPT may be appropriate during cold weather months if urea is being applied to a soil surface that is wet and frozen, or covered with a modest layer of snow. Application of urea to a deep snowpack over a frozen layer of soil is not advised because of the possible movement off the field of dissolved urea in the surface runoff. 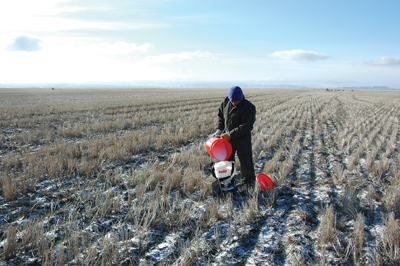