Field pea is generally thought to be relatively heat tolerant, but there are limits. Research by PhD candidate Yunfei Jiang in the department of plant sciences at the University of Saskatchewan is delving into how heat specifically affects pollination, seed set and the processes associated with pollen fertilizing an ovule to form an embryo and seed. 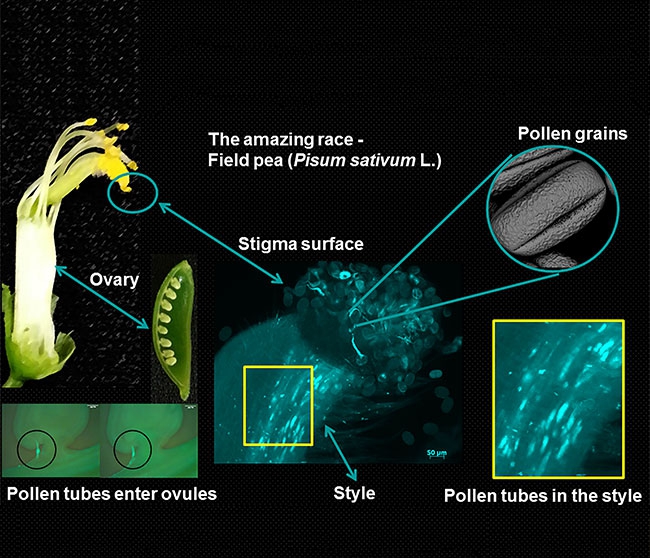 Jiang, working under the supervision of faculty members Rosalind Bueckert and Arthur Davis, found high temperatures can reduce pollination and seed set, but a quick review of the basics of pea pollination and seed set will help put the research into focus. A pea flower is made up of male (stamen) and female (pistil) parts. The male stamen has a filament that holds an anther, which produces and releases pollen. The female pistil consists of a stigma, style and ovary. The stigma surface receives pollen from the anther, where the pollen grains germinate and grow pollen tubes through the style to the ovary below. The fertilized ovules become seeds in the pea pod. Field pea is primarily self-pollinating. Pollination mostly occurs just before the flower opening.

Jiang looked at pollen germination and pollen tube growth under five temperatures ranging from 24 to 36 C with a 10-hour incubation period. High temperatures reduced the amount of pollen germination by about one-third in CDC Sage and by over one-half in CDC Golden, and most significantly when moving from 34 C to 36 C. While 36 C may seem like a fairly extreme temperature, consider that on a 30 C day measured in the shade, field temperatures in full sunlight can easily reach 36 C. On a 32 C day, the top of pea plants in a field would also reach 34 C to 36 C.

Jiang examined the structure of the pollen wall using a transmission electron microscope and found that heat stress caused the inner wall layer (intine) to almost double in thickness. She explains that the increased wall thickness might be a protective mechanism; plants may produce a thicker pollen wall in order to protect the sperm cell(s) inside from environmental stress.

“Further research is required to investigate the dynamics of the intine layer of pollen from legume plants subjected to high temperatures. Any detrimental effects of heat stress on either the intine and outer (exine) layers of pollen could cause abnormal pollen function,” Jiang says.

Another study looked at how pollen grains interact with the female pistil under heat stress, and how heat stress and ovule position affect seed development. In this experiment, CDC Golden and CDC Sage were treated in two heat regimes of 24/18 C day/night temperature with a 16-hour photoperiod and 35/18 C day/night temperature for four to seven days. Using a fluorescence microscope, Jiang was able to show pollen tubes could grow through the style of the pistil to fertilize the ovules. After four days of heat, the proportion of ovules that received pollen tubes was similar to control plants. However, after seven days of heat, fewer ovules received a pollen tube.

Jiang also looked at the effect of heat on seed development within a pod. Seed development was negatively impacted by heat, reducing the amount of pollen released with fewer fertilized ovules (less seed). The release of pollen from anther failed to occur following exposure to 35/18 C day/night for seven days. In half of the cultivars tested, ovules in the middle of the pod and at the furthest end from the pod stalk were more likely to develop into seeds than those at the stalk end of the pod. Cultivars with smaller thousand seed weight were able to retain the most ovules and seeds per pod compared to large-seeded cultivars. Large-seeded cultivars aborted more seeds when exposed to heat.