Honey bees and insect pollination provide yield and other benefits to canola. 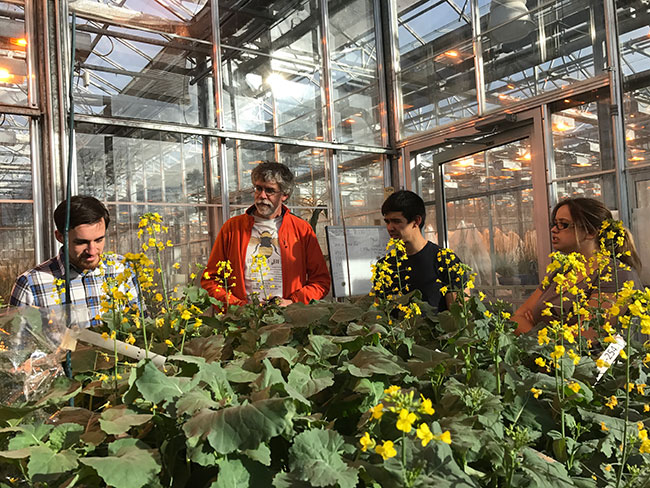 Honey bees and other pollinators are important for many agricultural crops. However, their effects and contributions can be challenging to determine. Canola is one of the crops that benefits from pollination, and a collaborative team of researchers in Alberta are working to better understand insect pollination benefits and their contributions to yield, quality and other crop responses.

“Canola has been grown for decades across the Prairies, however there are still a lot of questions around the contribution of honey bees to canola. Honey bees and leafcutter bees are absolutely necessary for successful hybrid canola seed production. However, the contribution to commodity canola production is less well-known,” explains Stephen Pernal, research scientist with Agriculture and Agri-Food Canada (AAFC) at the Beaverlodge Research Farm in Alberta.

“Pollinators are generally recognized as beneficial, but the question of how much honey bees or native pollinators actually contribute to canola yield or other crop factors has been the focus of some of our recent studies. These projects have been part of a very positive collaboration in the province with myself at AAFC, Shelley Hoover with the University of Lethbridge, and Ralph Cartar, recently retired from the University of Calgary, along with graduate students George Adamidis, currently a postdoctoral fellow in Bern, Switzerland, and Andony Melathopoulos, currently a professor at Oregon State University.”

To better understand the differences across varieties, a recent project included controlled greenhouse studies at AAFC Lethbridge to evaluate the responses of 23 commercially available canola varieties – both open-pollinated and hybrid – to insect pollination, while a subsequent field study at AAFC Beaverlodge examined responses in a subset of hybrid varieties. The studies compared seed production and quality across canola varieties, while also evaluating specific vegetative and phenological responses to insect pollination. 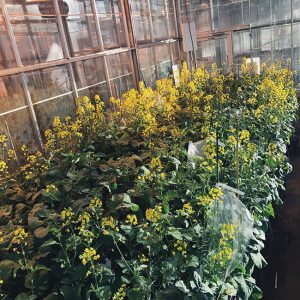 The greenhouse set-up for the experiment at AAFC-Lethbridge. 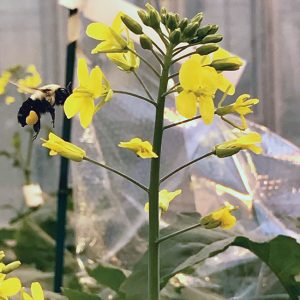 Bumblebees (Bombus terrestris) were used as pollinators in the published greenhouse study to evaluate the response of 23 canola varieties to pollination at AAFC’s Lethbridge Research and Development Centre.

“One of the findings from the complicated results of these studies is that insect pollination does generally benefit yield across all of the varieties, whether open-pollinated or hybrid,” Pernal says. “However, varieties do respond differently to pollination and have different dependencies, although generally overall there was a positive response to yield with bee pollination.

“Plants respond to pollination in a number of ways, and various plant parameters were compared in the study, such as time of flowering, number of pods on main stems and branch stems, plant size, root biomass and maturity. Generally, canola plants that were pollinated flowered earlier, produced more flowers at peak flowering, had fewer secondary branches, matured earlier and more evenly, had better seed quality and less green seed than non-pollinated plants.

“Insect pollination alters many plant physiological mechanisms and responses differently, but across varieties pollinators alter the functional character of canola plants to enable them to more quickly reach their maximum reproductive capacity,” he adds.

The study results were recently published in Scientific Reports (published by Nature Research), and more papers are in development.

In another greenhouse study, researchers examined the response of canola plants to pollination under different stresses, such as drought conditions. Although the results are not yet published, preliminary findings show bee pollination is generally positive under certain stresses like drought and can mitigate the impacts. Pollination benefited yield, even under stress conditions.

“We also took this research into field trials at Beaverlodge and added some other variables to the study,” Pernal says. “We wanted to know if there were any interactions between pollination and agronomic practices, such as fertilizer and seeding rates. In the trials, we compared normal seeding rates and half seeding rates, and normal fertilizer N (nitrogen) rates and half N rates. The early observations are that although canola plants do respond positively to pollination, it tends to not compensate for major inputs like fertilizer rate or seeding rate. The results were somewhat variety-dependent. The effects of pollination are incremental and can ameliorate some stresses. Overall, plants do respond positively to honey bee pollination with other benefits beyond yield.”

The experimental set-up of the field work done in Beaverlodge, examining the effects of pollination vs. non-pollination and the interaction of fertilizer and plant spacing treatments.

Honey bees are the workhorse pollinator for agriculture, but there are many species of native bees and other pollinators that are important for crop production. Growers can manage habitat on their farms to ensure it is conducive to nesting and long-term proliferation for native bees.

“Many of the good practices are about trying to preserve what you already have,” Pernal says. “This may be overlooked, but can be one of the most essential steps on farms. Look at the habitat and consciously decide to preserve what is there, such as shelterbelts or treelines, grassy ditches or untilled areas that may not be as productive, but provide good natural habitat. The diversity of habitat and more native plants are conducive to sustaining native bee species, so proactively enhancing the habitat is also recommended. [As well,] promoting practices that won’t harm bees, such as planting crop rotations of perennial and flowering crops and reducing insecticide use where it might harm native bees.”

For more information on the protection and cultivation of pollinator populations, Mark Wonneck, recently retired AAFC biologist, published an excellent guide for agriculture and native pollinators in Canada.

Pernal adds that there are long-standing relationships between growers and beekeepers. This mutually beneficial arrangement is often monetary, where crop growers pay beekeepers for contract pollination because it is so important for setting yields on that crop. It can also be an incidental relationship, where beekeepers might place bees in a corner of commodity canola for a honey crop and crop growers may get an increase in quality and yield.

“Communication is very important and crop growers should let beekeepers know when spraying might occur and if products used are potentially harmful for bees,” he says. “I think communication has been increasing in recent years and generally there has been a very good relationship between beekeepers and growers in Western Canada. It is in everyone’s best interest to keep pollinators alive.”