Reducing natural habitats in order to create more acres of farmland may become a regretful practice with negative consequences – including reducing the yield potential of canola and other oilseeds, says Melanie Dubois, research scientist with Agriculture and Agri-Food Canada (AAFC) from the Brandon, Man., Research and Development Centre. Dubois recently finished her second field season of a three-year project. 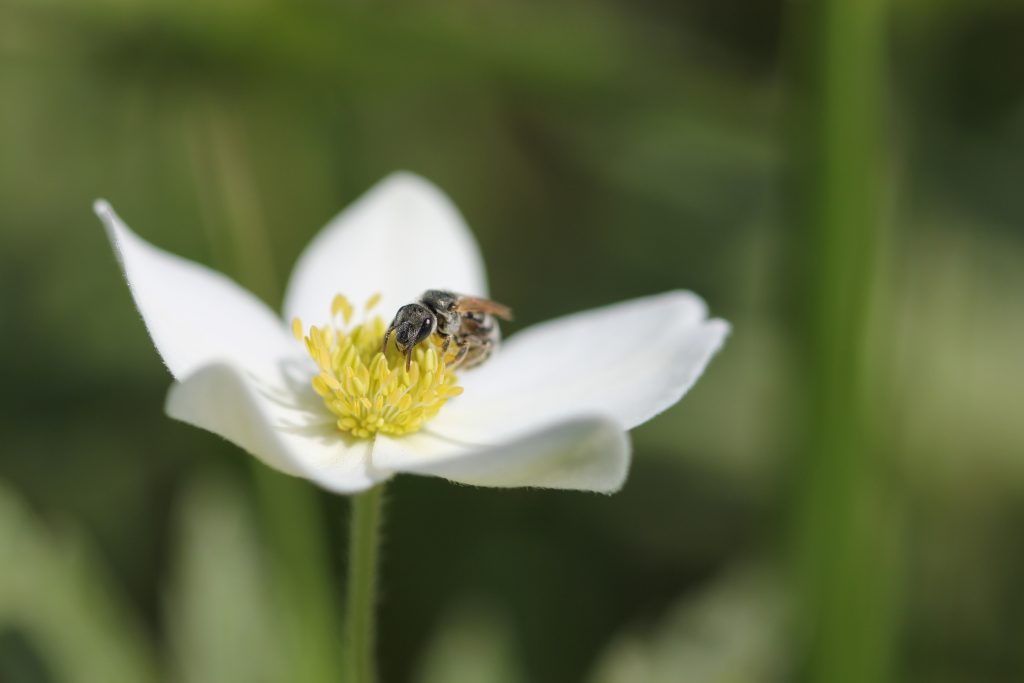 “We’re trying to connect land uses and land cover to bee abundance because the abundance and diversity of bees can be tied to the availability of resources to support those bees,” Dubois says.

As a group, pollinators include bees, wasps, moths, butterflies, flies and even birds, she says, though her focus is strictly on bees.

“For their entire life, all [bees] eat is pollen and nectar, and they keep going back to the same plant species. The other pollinators eat other things, or only focus on pollen for part of their life, and don’t really care what plant they get their nectar from.”

About 12 years ago, Dubois joined the Prairie Farm Rehabilitation Administration (PFRA) as a senior riparian and biodiversity specialist, working with community pastures on species-at-risk and riparian programs.

During that time, a question came up that led to the present study. When looking at natural habitat, fields and pastures, science didn’t have a way to analyze and answer whether the needs of the pollinators for food and nesting were being met. The PFRA could see differences in habitat and field ability to service pollinators, but they needed to define it. Then they could measure the supply in a meaningful way, and start to make recommendations for habitat improvements.

“That gap in our understanding connects the needs of wildlife and agricultural systems. It was in my area of expertise and became a logical fit for me,” Dubois says.

Her project began in April 2016, with funding to look at what pollinators need in the Brandon region, what the agricultural systems provide, and what the remaining natural systems can provide. Each year, Dubois is working with a dozen farms within approximately 60 kilometres of Brandon.

“[The producers] allow us to go onto their land, track their bees and do habitat assessments,” she says.

Six sites are along the field margin; six are in the fields, with insect collecting cups at points from the margin to the centre at the time of bloom. Dubois also does two types of inventories: In the summer, she does habitat assessment for one kilometre around each sampling site. In winter, she inventories farm practices that influence bees.

“We want to come up with a bee inventory and baseline for southwest Manitoba. Right now, we can only make inferences based on studies in other areas,” she says.

Hybrid canola seed can only be produced with insect pollination, and the canola crops itself is very pollinator-dependent.

“Regardless of what habitat you have on the margin, most small bees are not going to go more than 30 metres into the field,” she says. “As you go [farther] into a field you get fewer and fewer bees, and the bees get bigger. The farther the bees fly, the less food they can provide to the nest.”

Producers who co-operate with her research right now tend to have 15 to 20 per cent of the land in native habitat adjacent to production fields. However, Dubois has observed as little as five per cent native habitat.

Project outcomes will likely include a management plan, supplying perhaps 30 per cent natural habitat with a specific spectrum of flowering plants from April through September, in order for pollinators to supply maximum yield potential.

“A pollination service deficit is when an area cannot sustain enough pollinators to provide full pollination of your crops. It’s like a moisture deficit,” she says.

Creating improved pollinator habitats can impact more than just pollinator species. As habitat is returned, or bumped up, it will be the less productive acres that come out of production. Some crop inputs may be reduced. It will provide opportunity for improved wildlife habitat, for carbon sequestration benefits to producers and for erosion reduction in fields and watersheds.

“Habitat improvement, in the long run, meets a broad number of goals. We plan to give people practical recommendations for establishing habitat that…are economically viable and successful.”