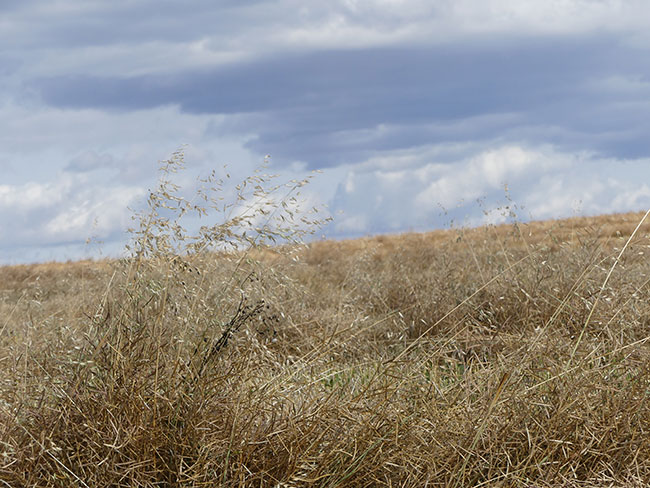 Testing 1, 2, 8, 14, and 15. Those are the herbicide groups to which wild oats are resistant in Western Canada. In some crops, there are few – if any – choices for controlling a wild oat that has multiple resistance to those herbicide groups, especially Groups 1+2 biotypes.

“Herbicide resistance in wild oat is arguably the worst weed problem that Prairie growers face,” says Charles Geddes, weed scientist with Agriculture and Agri-Food Canada in Lethbridge, Alta. “With wild oat resistance to up to five herbicide modes-of-action in the same population, growers are in need of alternate solutions.”

“Assuming a field has Group 1+2 resistant wild oat, in wheat, barley, pea and lentil, a grower only has pre-emergent herbicide options left. In canola, they would also have the option of Liberty and glyphosate in the herbicide resistance systems,” Geddes says.

Making herbicide selection even tougher is that Group 1+2+8 resistance has also been confirmed in all three Prairie provinces. This would remove triallate (Avadex and found in part of Fortress) from the list of effective herbicides. The trifluralin portion of Fortress may still provide suppression of wild oat.

Even worse, Group 1+2+8+14+15 wild oat resistance has been confirmed in Manitoba, which leave only Group 3 herbicides for wild oat suppression.

Target-site resistance develops as the result of random and naturally occurring mutations in a very low proportion of the wild oat population. Eventually, with increased selection pressure of the herbicide over the years, populations of the mutant biotype remain uncontrolled, multiply, and become the dominant biotype in the field. When this happens, the populations can survive high doses of the herbicide. Rotating or mixing herbicide groups can help slow the development of this type of resistance.

Within Group 1, Beckie found there were differences in cross resistance across the three chemical families commonly referred to as “fops,” “dims” and “dens.” In his research in 2001, he found that wild oat resistance was found more in the “fops” than the “dims.” In the “dims,” clethodim had a very low level of resistant biotypes. However, continual use of the “dims” for wild oat control would select for resistant biotypes, either through target-site resistance or metabolic resistance.

In Group 2, there are six chemical families. Beckie found that the Group 2 families were more likely to have cross-resistance across all families, such as the imidazolinones, sulfonylurueas, and sulfonylamino-carbonytriazolinones.

“This cross-resistance in Group 2 families is likely because of the development of more metabolic resistance, but further research is required,” Geddes says.

For growers interested in knowing if  they have weed resistance on their farm and what kind, several labs across the Prairies offer testing for $125 to $200 per sample and herbicide subgroup. These include the Saskatchewan Ministry of Agriculture’s Crop Protection Lab and Ag-Quest in Minto, Man.

In Alberta, Geddes’ Prairie Herbicide Resistance Research Lab is looking for novel herbicide-resistant weed biotypes. If undocumented resistance to an herbicide mode of action is suspected, growers and agronomists can send a sample for free testing. The lab is also accepting kochia samples for Group 4 (auxinic) herbicide resistance testing.

Geddes says, “Diagnostic testing can be an excellent investment in helping to understand herbicide resistance on your farm, and how to manage it.”

The field was a horticulture field under drip irrigation, so tillage could not be used to control weeds. The field was aerially sprayed with five to six

litres per hectare of glyphosate, five to six times per wet season for 12 to 15 years in a row. The researchers used a combination of genetic testing and rice calli tissue culturing to confirm the metabolic resistance.

While this is the first case of metabolism-based glyphosate resistance, it shows that evolution continues, and won’t likely be the last. This highlights the need for growers to use all their tools to manage herbicide resistance.