I call them my second herd,” says Brian Slenders, an alfalfa and canola seed and livestock producer near Scandia, Alta., and president of the Alfalfa Seed Commission of Alberta. 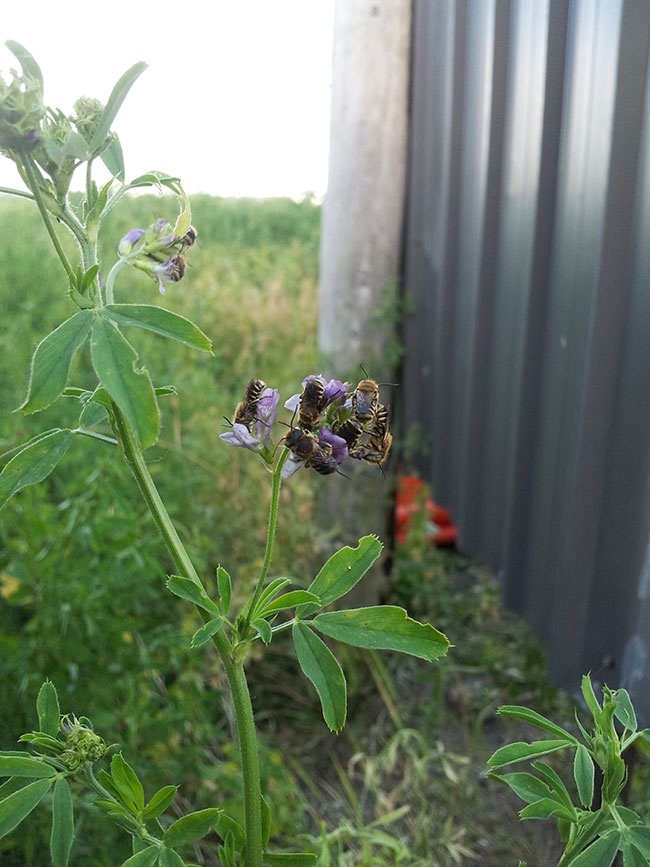 Leafcutter bees contribute the bulk of pollinator value in Canada. I call them my second herd

Slenders’ “second herd” is of the flying insect variety – leafcutter bees, to be precise.

Along with his brother, Wayne, Slenders runs a custom pollination business for producers, working with Dow to put leafcutters on hybrid seed canola fields in the area.

“In a standard contract, we provide everything that we need for pollination. We apply the nesting material and shelters, and we’ll hatch the bees and manage them while they’re out in the field,” he explains. “We’ll do this for a percentage of the crop in the case of alfalfa seed, where canola tends to be straight cash value per acre.”

Slenders has been working with leafcutters for 20 years. He says leafcutter bee production is “as much art as science”: the species is totally different from its better-known cousin, the honeybee. They’re called “leafcutters” because rather than producing honey, they put their energy into the construction of progeny cells made of leaf pieces arranged in a long series.

Due to their reproductive efficiency, alfalfa seed producers using leafcutters can expect to get one-and-a-half times the bee population back from the fields at the end of the summer. As a result, most alfalfa seed producers maintain a side business selling bees or running custom pollination for neighbouring hybrid canola operations.

But the value of the pollinator to the canola industry is rarely discussed and poorly understood on a national level.

According to Andony Melathopoulos, a postdoctoral fellow at the University of Calgary, leafcutters pollinate hybrid canola seed, the largest pollinator-dependent crop in Canada, and thus are responsible for one of the biggest contributions of pollinator value in the country.

“When I think about news stories, they’ve been about the collapse of honeybees, and that’s a real issue of importance to agriculture in Canada, but there hasn’t been a peep on what’s going on with leafcutters,” he says.

Leafcutters and canola
Melathopoulos, along with colleagues Shelley Hoover and Agriculture and Agri-Food Canada’s Stephen Page, are currently working on better methods of quantifying leafcutter-contributed value to Canadian canola production.

Because crops grown from hybrid seed yield more than open pollinated seed, and because pollinators are essential to making hybrid seed, “these two things together make hybrid canola seed the highest source of pollinator-contributed value in Canadian agriculture by a large margin,” Melathopoulos says.

But though leafcutters are crucial to canola production in Alberta, there are specific challenges to their use.

The leafcutters used in Alberta are Megachilidae bees, which originate in the eastern Mediterranean’s semi-arid climate. For this reason, leafcutters perform better in hot, dry conditions.

In addition, Hobbs says, leafcutters perform poorly on some new canola varieties, which results in population drops in some canola fields.

This means hybrid canola seed producers, if they don’t want to or can’t get into leafcutters themselves, are reliant on a few alfalfa seed producers to perform their custom pollination – and this represents a huge opportunity for those producers.

“There are a number of producers in the eastern irrigation district around Brooks who have made a $450 to $600 increase in value per acre on the leafcutters alone,” Hobbs says. “Plus the fact that they’re probably cleaning 600 to 800 pounds of seed per acre at two dollars a pound. They’re doing pretty well.”

Melathopoulos says Alberta leafcutter producers are, in no uncertain terms, the most technically advanced producers on the planet. Southern Alberta, he says, is a “hotbed of innovation” for homegrown leafcutter nesting and harvesting technologies.

In short, Alberta has a thriving niche industry in leafcutter production, one that is essential to hybrid canola seed production.

Which means, according to Melathopoulos, that it’s high time the value of the unassuming leafcutter bee received more attention in Western Canada.