The relationship between bees and canola is strong, just ask any honey producer. But what benefits do canola growers receive from those colonies parked at the corner of a field? New research in Alberta is delving in to that sweet subject. 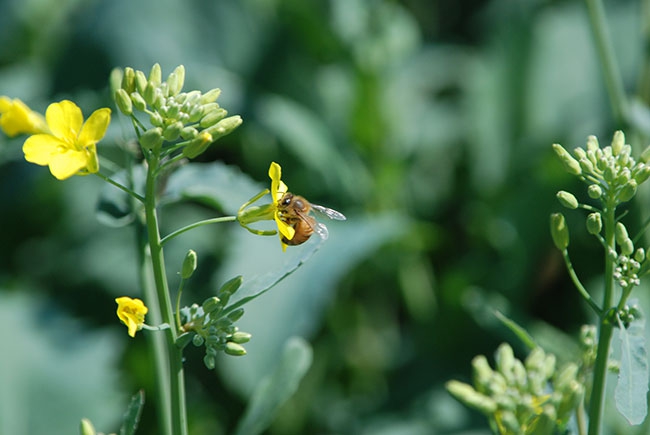 Alberta researchers are investigating the importance of bees to canola pollination and yield. The relationship between bees and canola is strong

“One of the things we wanted to find out is how much do pollinators contribute to yield in commercial fields,” says Shelley Hoover, apiculture research scientist with Alberta Agriculture and Forestry in Lethbridge, Alta.

According to Statistics Canada’s 2014 analysis of the Canadian honey and bee industry, the number of beekeepers and colonies continues to rise. In 2014, there were 2,195 beekeepers in Alberta (930), Saskatchewan (719) and Manitoba (546), which accounts for one-quarter of the beekeepers in Canada. However, two-thirds of the colonies in Canada are found in Alberta (295,000), Saskatchewan (101,000) and Manitoba (91,000), coinciding with canola production on the Prairies.

The importance of honeybees as pollinators is significant for both commercial canola growers and those in hybrid seed production. Hybrid canola seed production requires pollinators to carry pollen from the male flower to the female flower, as the female flower is self-infertile. In commercial canola production, however, the flowers can be self- or wind-pollinated. Some research has found additional pollination by bees can promote more uniform ripening and earlier pod setting, as well as increase the number of pods per plant and seeds per pod.

Research in Quebec by Rachid Sabbahi of the Université du Québec à Montréal found a 46 per cent seed yield increase when three hives per hectare were present compared to when no bees were present. While this type of density would require about 195 hives per quarter section or about 25 million hives on the Prairies – an unlikely density given there are currently about 490,000 hives – the research serves to highlight the importance of pollinators in canola production.

“But Lethbridge is windy, so wind pollination may play a disproportionately large role in canola pollination in southern Alberta,” Hoover says.

Hoover and Cartar joined forces with Stephen Pernal, a scientist with Agriculture and Agri-Food Canada, to conduct another trial at Lethbridge and Grande Prairie, Alta., in 2014 and 2015 with about 30 fields each year. The research by Sam Robinson, a University of Calgary PhD student, looked at which pollinators were present and in what quantity in commercial canola fields. Additionally, the research also assessed whether pollinator abundance decreased farther away from the field edge, the impact on yield and whether this abundance was related to nectar quantity or concentration.

Honeybees were the most common pollinator found visiting canola flowers, with about 10 visits per hour at Lethbridge and five per hour at Grande Prairie. The honeybee accounted for about 40 per cent of all pollinator visits at Lethbridge and about 50 per cent at Grande Prairie. Flies and hover flies were the next most common, followed by other bees, butterflies, bumblebees and leafcutter bees.

Looking at honeybee visitations per hour over distance and stocking density, high stocking rates produced the highest visitations near the hives, but also out with distance, although declining. This trend was also evident for nectar measurement. More nectar was found on canola flowers farther away from the hives (indicating fewer pollinator visits).

“One hundred metres into the field, visitations were still relatively high, but once you got to 400 to 500 metres into the field, it was the same as if you had not stocked the field with hives,” Hoover says. The researchers are now analyzing agronomic characteristics like faster podding, more uniform ripening and yield impacts.

Riley Waytes, a graduate student at the University of Calgary, is studying the amount of pollen deposited on stigmas by different pollinator species and the frequency of visits in hybrid canola seed production. He is looking at female leafcutter bees, bumblebees, male leafcutter bees, hover flies and honeybees in southern Alberta. Twenty-one fields were assessed in 2015 and 15 fields in 2016. His research is currently being analyzed for his master’s thesis.

Hoover says pollinator diversity may also be important. European research found as the number of bee species increased in some crops, so did the yield.

As these home-grown research projects start to prove the value of honeybees and other pollinators to canola production, the Canola Council of Canada encourages canola producers to work with honey producers to help ensure a healthy honeybee industry in Western Canada. The Canola Council encourages farmers and aerial applicators to talk to nearby honey producers about pest management plans, and to avoid spraying insecticides when canola fields are in bloom and during daylight. It is a relationship that is mutually beneficial.