Many winter wheat growers in Western Canada are wondering if the seeding window can be extended. A multi-year, multi-site Prairie study is working towards a tool that will help growers answer that question for their own conditions. 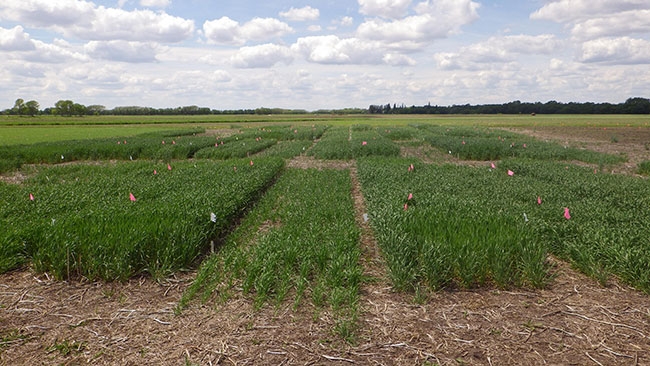 A study is comparing the effects of winter wheat planting dates ranging from August to November at multiple sites across the Prairies Many winter wheat growers in Western Canada are wondering if the seeding window can be extended.

“Recently it has become increasingly challenging to seed winter wheat in the fall. Probably the biggest factor is crop rotations. In Manitoba and even Alberta and Saskatchewan, producers are growing longer-season crops, like corn and soybeans, or longer-season varieties of crops like canola, and so they are harvesting later. Also, with canola, with the shift towards direct harvest, the crops are staying longer in the field. So, farmers who are planting winter wheat are planting it later,” notes Yvonne Lawley, a professor of agronomy and cropping systems at the University of Manitoba who is leading the study.

“There is a lot of interest on the part of growers to know what is the impact of later planting and can they push the seeding window later than they think.”

She adds, “Farmers are also thinking about soil health and wanting to increase the time where plants are covering the soil. Winter wheat is one of our best starting places for cover crops in Western Canada. If late planting allows growers to achieve goals related to yield and profits as well as soil management, then that is important to consider.”

The recommended seeding window for winter wheat is from about mid-August to mid-September across most of the Prairies. Seeding after that window may mean the young plants won’t have enough time to become properly established before winter sets in. For winter survival, the optimal growth stage is for the plants to have well-developed crowns going into the winter.

Lawley’s study involves 13 sites across the Prairies, encompassing a very wide region with diverse growing conditions. The Manitoba sites include Carman, Kelburn Farm (just south of Winnipeg), Arborg, Portage la Prairie, Brandon and Melita. In Saskatchewan, the sites are at Melfort, Scott and Swift Current. The Alberta sites include Lethbridge-dryland, Lethbridge-irrigated, Medicine Hat and Falher. Most sites started the trials in the fall of 2013, though a few started in the fall of 2014.

The winter wheat variety grown at all the sites is Flourish, which has fair winter survival. At each site, the study compares six planting dates: Aug. 15, Sept. 1, Sept. 15, Oct. 1, Oct. 15 and Nov. 1. The study team had a four-day window on either side of those target planting dates to account for weather and other logistical concerns.

For each of the six seeding dates, a fungicidal seed treatment (tebuconazole and prothioconazole) is compared with an untreated check. Seed treatments can help young plants deal with stresses like seedling diseases and cool growing conditions.

The study is looking at the effects of seeding date and seed treatment on spring plant stand populations, timing of maturity and crop yield.

Some key trends
“One of the questions at the beginning of the study was just how many of these seeding dates could we actually plant in the experiment, across these wide areas?” Lawley says.

The biggest challenge turned out to be the Aug. 15 treatment. She says, “Much like farmers, researchers have a hard time having a piece of land open to plant in August.”

The Nov. 1 date is a dormant-seeding timing, when the soil is cold enough that the seed won’t germinate immediately. She explains, “To be able to seed at this date, you just have to be able to get your drill through the ground – for instance, the soil could be frozen at night and trafficable during the day – and to have no snow cover.”

For most site-years, winter wheat yields declined with later planting, as expected. “In Manitoba and Saskatchewan, definitely our highest yielding planting window is between Sept. 1 and 15. This finding agrees with the research conducted by Brian Fowler in the late 1970s that identified early September as the optimal highest-yielding planting window for winter wheat,” Lawley says.

Fowler’s study identified the optimum seeding window to be from mid-August to early September. Results from Lawley’s study across a wider growing region suggest the optimum window has shifted and now ranges from late August/early September to early/mid-September.

The effect of planting date on yield differed by province. “In Manitoba, most sites tended to follow the pattern of decreasing yield with later planting. However, in years where most Manitoba sites were able to get their Aug. 15 treatments seeded, like 2015/16, the Aug. 15 planting had a lower yield than the Sept. 1 planting. So you can plant too early. That result is very consistent with research that Brian Fowler did many years ago,” Lawley notes.

“In 2016, yield trends were most consistent over the six Manitoba sites. On average in Manitoba in 2016, there was a 23 per cent yield reduction between the Sept. 1 and Oct. 1 planting dates and a 37 per cent reduction for the Sept. 1 versus Oct. 15 dates. At the three Saskatchewan sites, yield reductions between the Sept. 1 and Oct. 1 treatments ranged from zero to 35 per cent. In Alberta, yields in 2016 actually increased with later planting at two of three sites when comparing the Sept. 1 to the Oct. 1, 15, and Nov. 1 planting dates.”

For the Manitoba sites, the growing conditions at the different sites are similar, which may be why the patterns in the relationships between planting date and yield were somewhat similar from site to site. The Saskatchewan and Alberta sites encompass more contrasting environments and the yield patterns were more complicated, so Lawley needs to do more analysis to draw further conclusions about the relationship between yield and planting date for those two provinces.

“We didn’t always see a yield increase where we had a significant increase in plant stand. But again, averaging our yields over all sites and years, we saw a higher yield in 2013/14 and 2014/15 for the plots with the seed treatment compared to those without, but we didn’t see that effect in 2015/16. And most of the sites that had a yield response to the seed treatment were in Manitoba.”

Of course, winter and early spring weather conditions at each site are also a crucial factor in overwinter survival and yield. As well, Lawley thinks Fusarium head blight might be influencing the study’s yield results.

She explains that the study protocol didn’t include spraying for Fusarium: “When we were setting the protocol in the summer of 2013, we were less concerned about Fusarium in winter wheat. Both with having chosen Flourish, which has been more susceptible to Fusarium than expected, and with having more Fusarium in winter wheat in general during the time period of the study, it was definitely a limitation of this study.”

Lawley is currently having the grain samples from the study analyzed for Fusarium head blight. The disease favours warm, moist conditions before and during flowering, so she suspects the trends will be very site-specific, depending on which sites had conditions favouring the disease and when in the growing season those conditions occurred.

Regarding the effects of planting date on the days to maturity, she says, “Planting date had a significant influence on maturity date at 10 out of 13 sites in 2016. At these sites, a later planting date resulted in later maturity – on average, by eight days between the Sept. 1 and Nov. 1 planting dates.”

A tool for late planting decisions
“One of the interesting things about the study’s results is that the yields for the October and November seeding dates are not worse than they are. With planting in October, although we definitely have declining yields, the yields don’t drop to zero,” Lawley says.

She adds, “Winter wheat needs to vernalize to be able to go from vegetative growth into reproductive mode, but even in our dormant-seeded winter wheat treatments, those plants that survived the winter were able to produce seed.

“So the answer to the question of ‘Can you plant into October?’ is more promising than we thought at the beginning of the study. But producers will be the ones to decide whether there is value to them in planting in those later windows. I think that will depend on their location and the weather, but they don’t know what the coming year will be like when they’re going out to plant.”

As the study finishes up in 2017, Lawley will be using the data sets from the sites to develop a decision-making tool for farmers. The tool will allow users to compare later winter wheat planting with their other cropping options, including the likely yields and profits for the various crop options. She notes, “In one growing environment, you might be happy with a given winter wheat yield, and in another growing environment where you have other crop options, you might not be happy with it.”