Imagine yourself as a winter wheat kernel. You’re planted in the fall, germinate and grow a bit, then hibernate until spring when you start growing again. Meanwhile, fungus and insects are attacking your roots and shoots throughout the fall and spring. No wonder poor stand establishment is a major constraint for high-yielding winter wheat crops. 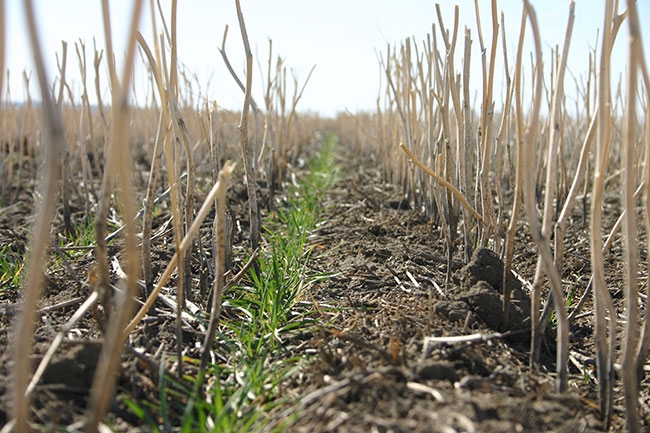 A seeding rate of 400 plants per square metre combined with seed treatments can improve stands and increase yields. Imagine yourself as a winter wheat kernel.

“The interesting thing about the study was that as you move towards a stronger agronomic system, you can see that there is no dominating component or magic bullet. The impact of a single practice in a strong agronomic system is subtle; however, you will see incremental improvements to the system as a whole and that makes your crop more resilient when faced with a changing spectrum of disease, insect or abiotic pressures,” Beres says.

“From the responses across environments, we concluded that a dual fungicide/insecticidal seed treatment will improve winter wheat plant establishment and ultimately increase crop yield in a thinner winter wheat stand,” Beres says.

Inclusion of a dual fungicide/insecticide seed treatment provided the highest gross returns for both levels of sowing density, but the added input cost of the seed treatment reduced overall net returns at the 400 seeds per square metre seeding rate by $11 per hectare.

But Beres cautions growers shouldn’t view these results as an opportunity to use seed treatments to cut seeding rates to 200 seeds per square metre. “You won’t always see a net economic return with a stronger agronomic package, but you have to look at other factors that can impact the weaker system. A stronger system may be better able to tolerate poor weather conditions, weed or insect pressure, or foliar leaf diseases,” he says. “A stronger system is insurance against stresses.”

A seeding rate of 400 plants per square metre combined with seed treatments can improve stands and increase yields.

Demonstration project finds similar results
Chris Holzapfel, a researcher at the Indian Head Agricultural Research Foundation in Indian Head, Sask., found similar results with seed treatments in an Agricultural Demonstration of Practices and Technologies (ADOPT) program conducted over three consecutive growing seasons from 2014 through 2016. The study looked at seeding rates of 200, 300 and 400 seeds per square metre, with treated or untreated seed (Raxil Pro or Raxil Pro-Shield), and with a foliar fungicide compared to no foliar fungicide. Normalized difference vegetation index (NDVI) was measured using a handheld GreenSeeker during stem elongation (prior to flag-leaf emergence). NDVI can be utilized as an indirect measure of crop vigour, canopy density and overall above-ground biomass.

“While there were never any benefits to increasing seeding rates beyond 300 seeds per square metre, emergence was always excellent and winterkill was minimal with the 400 seeds rate,” Holzapfel says. “I haven’t seen the same benefits that Brian did in his research, but agree that higher seeding rates can provide a buffer and improve winter wheat yield stability over the long term and across a wider range of conditions.”

The response to seed treatments in the Indian Head ADOPT study was small but relatively consistent. Early season NDVI was higher with seed treatments in both 2014 and 2016, which indicated improved establishment and/or more vigorous early season growth. Overall, seed treatments significantly increased yield by 2.2 per cent (1.5 bushels per acre, or bu/ac) when averaged over the three years.

In a similar demonstration at Indian Head in 2013, winter wheat was seeded into very dry soils and did not emerge until the following spring. Under these conditions, plant populations were essentially doubled with seed treatment (Raxil Pro), and yields were increased by 15 per cent. However, Holzapfel says such dramatic responses are certainly not typical.