When is the “right” time to put soybeans into the ground? Research in Manitoba is moving beyond the recommendations borrowed from Ontario and south of the border to develop Prairie-specific guidelines. 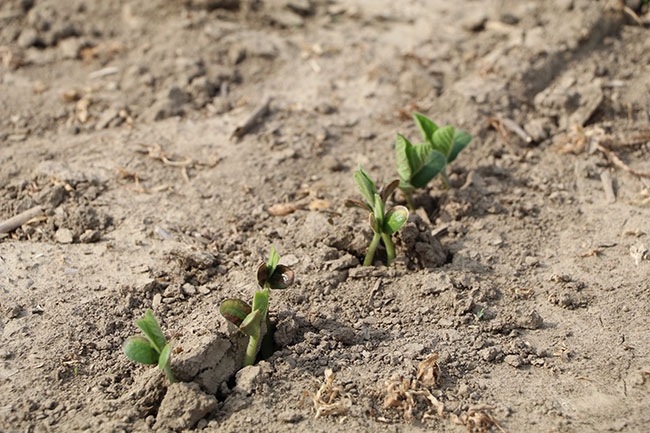 Once emerged When is the “right” time to put soybeans into the ground?

“I would say that planting date is a case of balancing early versus late planting, and there are several factors to consider to determine when to plant,” says Cassandra Tkachuk, production specialist with Manitoba Pulse and Soybean Growers (MPSG).

Tkachuk says these factors include soil temperature, calendar date, the weather forecast following seeding, and personal risk – including frost risk for a specific area (number of frost-free days, calendar dates in which frost events are likely), the number of acres to be seeded to soybeans in relation to other crops (which may require earlier seeding than soybeans) and the timeline to complete seeding and harvest in general. “This allows the decision to become more personalized for the grower and for their specific location,” she says.

The original recommendation for soybean growers in Manitoba was to plant soybeans when the average soil temperature at seeding depth was at least 10 C or higher. At this temperature, soybeans will emerge in about two weeks; if planted into cooler soils, they may take up to three weeks to emerge, putting them at risk for greater seedling mortality and insect and disease issues. If you wait until the soil temperature is 12 C to 15 C, soybeans may emerge within seven to 10 days.

However, when looking at yield, the two-year study found there was no soybean yield penalty from planting into low soil temperature plots. Tkachuk reports calendar date had a greater effect on soybean yield than soil temperature. In one case at Carman in 2015, seeding was delayed into June and resulted in a yield decline because of the late seeding date, not because of seeding into warm soils. Generally, yields at Carman were higher in 2014 and 2015 when planted into cooler soils, or on earlier calendar dates.

“My research, along with much of the literature, has indicated that planting in June can reduce yield. So, for the latter part of the planting period, I recommend that growers should aim to plant soybeans prior [to] the end of May, if possible. However, if there is a late spring, it is still acceptable to plant shorter season varieties in early June,” Tkachuk says.

Additionally, MPSG advises growers to look at the short-term forecast after planting. If the soil temperature drops below 8 C, or a cold rainfall occurs that drops the soil temperature, a chilling injury may occur to the seed or seedlings. Damage to cell membranes can occur if the seed takes up cold soil moisture.

“If there is a risk of cold/freezing air temperatures, it might be better to wait a day or two to seed soybeans. Rain should also be considered, where cold, wet conditions can increase the risk of chilling injury during imbibition,” Tkachuk says.

Information from Manitoba crop insurance data shows that in most areas of the province, the optimum planting date has been the second or third week of May, with yield potential remaining at 100 per cent up until third week of May.

The crop insurance data essentially indicates planting too early can increase the risk of damage from late spring frosts. Once emerged, soybean plants are susceptible to frost damage at temperatures below -2 C.

“And the personal risk factor is also important here. If a grower still has a lot of acres to put in the ground, it is likely best to start planting, even if conditions are not ‘ideal.’ Although my research did not compare which of these factors is the most important to consider for planting, it was likely that calendar date had a stronger influence on yield than soil temperature at planting,” Tkachuk says.

The bottom line is that growers need to balance soil temperature, calendar date and the weather forecast following seeding, along with their risk tolerance to spring or fall frosts, seedbed conditions and seeding and harvest windows.