Canola stubble has traditionally been the preferred stubble for winter wheat plantings because it can capture snow to insulate the overwintering wheat crop, improving winter survivability. However, some high-yielding canola hybrids have later maturities, presenting a challenge for seeding winter wheat at the optimum time. 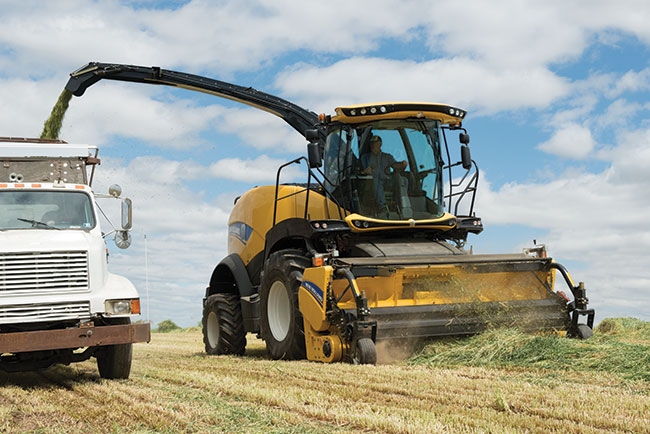 “Canola is ideal, but issues are occurring because of later-maturing varieties. Some growers are looking at earlier-maturing crop phases like peas, but the snow trap index as a proxy for snow insulation for pulses is not great, so that prompted some additional research into pulse as well as barley silage stubble,” says Brian Beres, a research scientist at Agriculture and Agri-Food Canada (AAFC) in Lethbridge, Alta.

Winter wheat should be sown from the last week of August to mid- or late September (depending on the region) to allow sufficient growth to optimize winter survival and subsequent yield. As a result, the previous crop must be harvested prior to the end of August for an effective crop sequence and removal of any green bridge. This issue with canola maturity motivated a team of AAFC agronomists to look for alternative rotational crops for winter wheat.

A four-year trial was established at Lacombe in Alberta, at Melfort and Indian Head in Saskatchewan, and at Brandon in Manitoba. In the first year, six crops were grown, including barley for grain harvest, barley for silage, canola, pea, oat, red spring wheat, and canola. After harvest, two winter wheat varieties, a hard red spring wheat, Canada Prairie Spring wheat, and barley were grown on the stubble. Winter wheat was planted by the optimal date immediately after harvest and the spring crops were planted by May 15 the following spring.

Overall, Beres says the winter wheat stands were adequate throughout the study period, although slightly lower than optimum. He says the yields of winter wheat grown on canola, barley for silage and pea stubble were often the highest, while yield on wheat, oat and barley for grain were often the lowest. With the exception of CDC Osprey winter wheat on oat stubble, winter wheat also always achieved a minimum grain protein content of 11 per cent – necessary to meet Canadian Western Red Winter wheat grades No. 1 and No. 2. Beres reports the results reinforce the notion that stubble types other than canola can be a good option for winter wheat producers to ensure optimal winter wheat yield and kernel quality.

“Winter wheat planted on barley silage stubble did really well but if you grow it on barley stubble harvested for grain, it didn’t do that well,” Beres says. “I think it’s likely because of competition from volunteer barley left after grain harvest. Volunteer barley is very competitive, even against winter wheat, and it is hard to clean up with herbicides. There are some options, but if you don’t take out the volunteer barley soon enough, it seriously compromises yield.”

Beres says another issue with barley harvested for grain is that there may be a large amount of straw left at harvest, which may result in nitrogen (N) immobilization tying up soil N.

Leaf spot disease on the penultimate winter wheat leaves was measured at one location over the three years. The results found disease was higher on CDC Osprey when grown on wheat or barley silage stubble. Disease severity on barley silage stubble may have been greater because the winter wheat had a better plant stand more conducive to disease development than on barley for grain stubble.

“Be conscious of the green bridge. A pre-seed burndown that eliminates all green material before seeding the winter wheat crop is very important,” Beres says.