Many landowners have questions about how much woody biomass they can realistically expect when growing wood fibre as a cash crop. Fortunately, the Canadian Wood Fibre Centre (CWFC) can help clear up a great deal of the mystery prior to landowners making a crop commitment. The CWFC has an extensive field sampling program that can provide yield estimates based on quality science.

Growing short-rotation trees as a cash crop is no different from growing annual grain crops. The bottom line is to maximize crop yield while keeping input costs in check.

There are essentially two crop options when it comes to growing short-rotation woody crops. The first is growing high-yield, large-diameter hybrid poplar or aspen measuring more than 15 centimetres in diameter in an afforestation, orchard-type design. The second is growing small-diameter willow or hybrid poplar in a concentrated design.

Keddy describes afforestation as orchard-style plantations with 1100 to 1600 large, high-yielding stems planted per hectare on agricultural land grown over a single rotation of 12 to 20 years and then harvested. This biomass is typically used in pulp, oriented strandboard or bio-product manufacturing. With this style of cash crop, CWFC targets a yield of 13.6 cubic metres per hectare per year. As buyers typically purchase wood fibre on a cubic-metre basis from this type of plantation, this is a critical factor to calculate profitability.

Concentrated biomass plantations have 13,000 to 18,000 stems per hectare, Keddy says, with the woody biomass harvested on a three- to four-year rotation and harvested six or seven times over their productive lifespan. This wood is typically purchased on an oven-dried tonne (ODT) basis and is used for biofuel, bio-remediation or bio-product manufacturing. CWFC predicts growth and yield to average seven to 11 oven-dried tonnes of biomass per hectare per year.

Yield dependent on agronomic factors
Regardless of the design, short-rotation woody crop growth and yield results come down to three important factors. These are site suitability, clonal selection and plantation management. Keddy emphasizes that it is important for the landowner to pay attention to all three of these important factors.

“This isn’t baseball,” says Keddy. “With short-rotation woody crops, one strike and you are out.”

“To determine site suitability, landowners can use a site suitability model that CWFC has developed where a number of bio-geoclimatic factors are evaluated. We can predict the growth and yield expectations for the site,” says Keddy. “Growing trees is expensive, so you want to grow the best trees on the best sites. The goal for any of these short-rotation woody crops is to harvest the most volume for the cheapest price per cubic metre.”

Clonal selection is the tree varieties selected by the landowner for his particular site. The goal is to unite the correct clones with the correct sites. That’s where CWFC demonstration sites located throughout Canada can benefit landowners because they demonstrate growth and yield for a wide variety of clones in many different geoclimatic zones. Landowners can visit these sites and determine which clones are best suited for their particular sites.

With the CWFC data, landowners have quality data to use to predict how much yield they can expect from each crop rotation. Ultimately, however, the amount of income earned depends on who’s buying and how much they are prepared to pay for it. 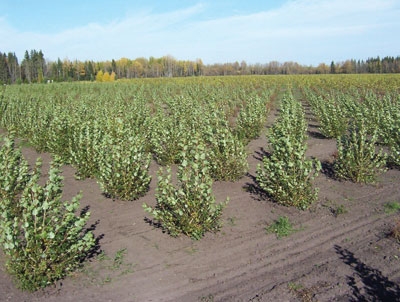 Vegetation control is critical for improving yield on a short-rotation woody biomass crop Many landowners have questions about how much woody biomass they can realistically expect when growing wood fibre as a cash crop.
Print this page