What’s becoming more and more evident is that many of the best ideas for harvesting short-rotation wood fibre crops (SRWC) like willow or hybrid poplar in a plantation setting feature technology familiar to farmers.

These crops can provide an income to farmers as a raw material to produce bioenergy and forest products as well as for their carbon credit potential. One of the latest harvesting systems being tested looks a lot like the system used to harvest silage. The prime mover, which can be a mulcher or a tractor with a minimum 300- to 350-horsepower output is equipped with a specially designed harvesting head called a Bio-Harvester. It chips the wood instead of mulching it and then blows the chips into a trailer, which is pulled by the prime mover. Trailers commonly used to collect and dump silage have been tested and shown to be quite effective in this application.

What’s really different about harvesting wood fibre crops in this way is how well it complements the planting and harvesting cycle in Canadian agriculture, since the best time to harvest the crop is in late fall or winter when other crops have been harvested and the leaves have fallen off the trees. So farmers can harvest another potential cash crop at a time of year when the equipment is usually sitting idle. Another bonus is that the equipment is travelling on the cropland when that land is usually frozen.

Staff at the Canadian Wood Fibre Centre’s (CWFC) Edmonton office recently demonstrated the use of the Bio-Harvester for the first time in Canada. The European, purpose-built, front-mounted chipper was mounted on a 400-horsepower, RT400 Fecon tracked mulcher.

CWFC’s interest in demonstrating the technology was to provide landowners with options to harvest and capture biomass on SRWC plantations and natural stands.

“When using a mulching head, you are smashing and pulverizing the wood and leaving it on the ground,” says Tim Keddy, CWFC wood fibre development specialist. “At present, there is no way to collect it. With this head, it grinds it up into chips and blows it like a snow blower into a hopper that trails in behind.”

The Bio-Harvester can be used to create biomass from both hardwood and softwood fibre, and costs about $125,000.

As part of the demonstration, Keddy rented a high dump trailer commonly used in the agriculture industry, which was towed behind the mulcher, and used it to collect the biomass as it was being chipped. It is capable of lifting and dumping its load into a truck for transport.

The front-mounted chipper was designed specifically for biomass recovery and is manufactured by a German company called AWRI and brought to North America by Fecon Inc. for demonstration. It is able to harvest trees up to 13 centimetres in diameter. During the demonstration, the system harvested 0.6 hectares per hour. The head is adjustable so that stumps can be cut very close to the ground.

Given the capital outlay required for the Bio-Harvester, it makes sense for owners to investigate a variety of applications for the implement to more quickly pay for its purchase. Keddy says there are a number of potential uses for this technology. The first potential use is for harvesting SRWC plantations of densely planted willow and hybrid poplar. The SRWC can be harvested every three years, with up to seven coppice cycles per root system.

In addition to using this technology on their own SRWC plantations, another potential use of this technology by farm owners is contracting it out to other industries, such as oil and gas and power companies – essentially any environment where trees up to 13 centimetres in diameter are being removed. Rather than the woody fibre being mulched and left on site, this technology allows for collection of the biomass and removal from the site.

“In the past, mulching and the harvesting have occurred but there were very few ways of collecting the biomass that was being harvested,” says Keddy. “Usually it was just left on site; now this is a way of collecting it and using it for other purposes.”

A third potential use is contracting the equipment out for the Fire Smart program to remove fuel sources particularly around communities to protect them from forest fire hazards. An advantage of using this technology is that the biomass is removed from the site and not left on the ground as potential fuel.

Keddy adds that by combining the Bio-Harvester with a soil stabilizing head that can actually dig 12-18 inches into the ground, stumps and roots can be removed, allowing for the site to be disced and seeded the following spring. CWFC also is investigating its performance.

So far, CWFC has demonstrated this front-mounted chipping and biomass recovery technology on a plantation. Now, it will demonstrate and investigate its use harvesting small-diameter natural stands of willow, black spruce and tamarack, and a mature forest featuring aspen with a variety of understory vegetation for the Fire Smart program. 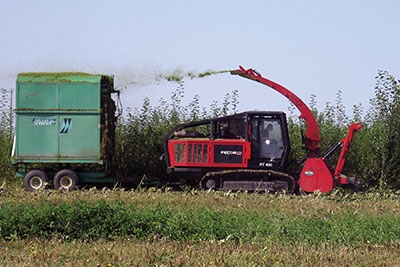