Blindly applying manure to a field is a lot like navigating a certain creek without a paddle – it doesn’t work. Knowing the soil isn’t enough – producers need to know what’s in their organic fertilizer, and equally important, the availability of the nutrient load.

“It’s quite variable. It depends on the animal species, the feed, and how it’s handled or processed,” explained Dr. Jeff Schoenau, a soil science professor at the University of Saskatchewan. “My advice is to at some point have the manure tested and analyzed. That will give you the total amount of nutrients, but is also useful in predicting the availability of nutrients from that manure.”

In other words, each manure not only has an ingredient list but also a timeline of when those ingredients will become active. Liquid manure is more predictable, but cattle manure varies considerably. Nitrogen, for instance, can be as low as five percent in the first year of application or as much as 50 percent.

Solid cattle manure often contains a high amount of straw bedding, and the nitrogen it contains is in the organic form.

“It can actually have quite low availability of nitrogen in the first one or two years following application as it has a high carbon-to-nitrogen ratio,” notes Schoenau. “When the micro-organisms decompose that manure, there isn’t a lot of nitrogen left over in the initial stages of decomposition to be released. Consequently, we’ve observed in Saskatchewan with some of the feedlot bedding manures, we may see only 10 or 20 percent availability of the nitrogen in that first year of application.”

Using manure can be an effective fertilization method, but it needs to be part of a long-term multi-year strategy to achieve optimum soil health. In the past, producers tended to think in annual timelines, but a better understanding of soil, micro-organisms and even manure has changed that.

“I would also say manures unfortunately don’t always have the balance of available nutrients that crops need,” says Schoenau. “For example, we often find with solid manures that there’s more phosphorus relative to available nitrogen in relation to what the crop needs. That can pose issues trying to meet the nitrogen requirements of that manure and can lead to overloading of the soil with phosphorus.”

Although solid cattle manure management poses challenges, liquid manure is no exception. Some liquid manures have low sulphur availability relative to nitrogen, and if producers are already working with a sulphur-deficient soil and grow a sulphur-demanding crop like canola, intervention may be required. That’s when knowledge truly becomes power for the producer.

“We have occasionally seen instances where we’ve had to use supplemental sulphur fertilizer in order to ensure that the nitrogen-to-sulphur ratio was correct for the canola crop,” says Schoenau. “For solid manures with slow release of nitrogen, we may also see a benefit from supplementing the manure with commercial nitrogen fertilizer in order to get the maximum benefit out of the other manure nutrients like the phosphorus.”

While the benefit from applying solid manure fertilizers may not manifest immediately, as the content is broken down and decomposed, nutrients are released. It’s like a multi-vitamin for soil, but in a time capsule with staged releases. “It also builds up the long-term ability of that soil to supply nutrients like nitrogen and sulphur through this process we call mineralization,” notes Schoenau.

Liquid effluents can be more immediately gratifying, but their lack of organic material means they don’t have the same strong residual effect. “Anytime you’re using manure as a fertilizer, it’s important to monitor your fertility levels in the soil, your organic content, and even your salinity and sodicity is important to get the best benefit out of that manure,” explains Schoenau.

Much like pairing a red wine with a tender steak, soils and fertilizers need to complement one another. Schoenau says commercial fertilizers have become much more expensive in recent years and more and more producers are realizing the value of manure. However, not everyone treats manure with the same degree of sophisticated analysis that is already given to soil and commercial fertilizers.

“So just like when you’re working with a commercial fertilizer, you want to balance or match the amount of nutrient that a crop needs in total to achieve the target yield with what you’re putting on as a fertilizer or manure,” he notes. “The only way you’re going to know that is through a soil test and testing of the manure to find out what’s in it so you can determine the appropriate application rate of manure. Obviously, with a manure or compost that is three or four percent nitrogen, you’re going to need less of it compared to a manure that’s 0.5 percent nitrogen.”

There are private and government laboratories that will perform rate calculation of manure application as indicated by manure and soil testing. The resulting treatment decisions may include liquid, solid or commercial fertilizers – or any combination thereof. However, while a soil health and fertilizer plan may span years, producers must keep a close eye on conditions. Events such as flooding or even a very wet year might require new testing and adjustments to the plan.

“In wet conditions, as far as accelerated nutrient losses, nitrogen is the element of most concern,” says Schoenau. “If you do have nitrogen in the soil that has accumulated as nitrate, it’s susceptible to loss by leaching below the root zone if there’s a lot of water moving through the profile.”

Nitrate loss through water movement usually happens in coarse-textured sandy soils, in which the nitrate might be moved below the depth of potential nutrient uptake by roots. “The other potential mechanism is a process called denitrification.

When the soil is flooded, the micro-organisms use the nitrate as an oxygen source, and convert it to nitrogen gas and it’s lost to the air,” says Schoenau.

This method of loss is more common in regions with heavier-textured soil. The micro-organisms run out of oxygen in the saturated soil, and must use the nitrate in their respiration in order to survive. Microbial research has been rapidly advancing, and as more is learned, producers will be able to apply that knowledge to their understanding of how their soil and fertilizers work together.

“It used to be in the past that for identification of micro-organisms there was a fairly elaborate plating process that went on, looking at growth on selective media. But in the last few years, it’s my understanding that the ability to identify microbial populations in the soil has been greatly increased through molecular techniques – DNA fingerprinting and identification of microbial populations using tags like fatty acid composition,” says Schoenau. “Those techniques have greatly accelerated the ability to identify microbial populations, the species of micro-organisms that are out there, their groups, and their diversity.” 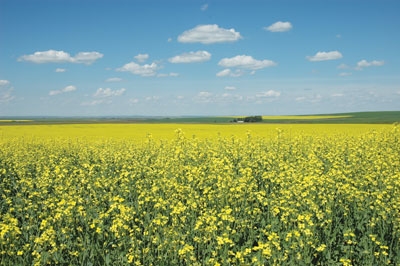 When growing a sulphur-demanding crop like canola Blindly applying manure to a field is a lot like navigating a certain creek without a paddle – it doesn’t work.
Print this page