Since Canada’s first major outbreak of wheat midge in northeastern Saskatchewan in 1983, research scientists, agronomists and producers alike have been fighting to stay on top of the costly orange pest. As its range continues to expand – it moved into central Alberta a decade ago and into the Peace River region over just the past two years – ever more farmers are torn between the temptation to spray and the seeming agony of waiting. Agriculture and Agri-Food Canada (AAFC) research scientist, Dr. Owen Olfert, explains that when managed correctly and with patience, nature’s own wheat midge solution will play in producers’ favour.

Macroglenes penetrans is a small, black, parasitic wasp with a highly specific taste for wheat midge larvae and a life cycle that uniquely coincides with that of its host. The parasitic relationship takes a full year to complete: the wasps lay their eggs inside midge eggs; the wasp larvae hatch, grow and overwinter inside the midge larvae; the following spring the wasp larvae outgrow and kill their midge larvae hosts. A healthy population of these parasitic wasps will naturally control between 30 and 40 per cent, and under ideal, very-established conditions, as much as 80 to 90 per cent, of wheat midge.

While virtually every wheat producer is familiar with the parasitic insect and its valuable pest-management contribution, the difficulty for producers can be the delicate balancing act required to manage the pest while supporting the parasitoid.

“Bio-control remains one of the less common pest-management tools. Some producers find it challenging because it is not immediately effective (unlike a chemical pesticide application). But, I would say the enthusiasm is there. The level of control we’re getting speaks to producers recognizing that they will get some benefit if they just take care of the beneficials,” says Olfert.

“Wheat midge has been an issue in parts of the Prairies since the mid-1980s, so some producers have a long history of dealing with them. However, we continue to receive questions from producers in newly infested areas, especially about how long they have to wait before the parasitoid will arrive, and how they can help it get established.”

Macroglenes penetrans, itself an invasive species that likely tagged along when wheat midge entered Canada more than 100 years ago, typically follows one to two years behind the movement of wheat midge infestation. It can be a challenging wait, even for entomologists.

“In northern Alberta, the first year (after wheat midge infested), there were absolutely no parasitoids found. We were already beginning to discuss the option of rearing parasitoids in the south and introducing them up there. In the second year, we discovered the parasitoids in low numbers, which is quite typical in what we’ve found in Saskatchewan previously,” says Olfert.

The very fact that Macroglenes penetrans exist on the Canadian Prairies is lucky chance.

“It’s not always the case that a parasitoid is found. In fact, it’s quite rare because quite often these alien invasive species show up without any of their natural enemies. Essentially, everything we developed after we first found Macroglenes penetrans was twofold: we wanted to control the pest but we really wanted to preserve this natural enemy,” says Olfert.

Wheat crops are only susceptible to wheat midge during the narrow window prior to flowering when the wheat head comes out of the boot. During this time, careful monitoring for the pest is vital since midge populations can explode under the right environmental conditions. Of course, monitoring is easier said than done, since the only time adult midge can be easily counted in the crop canopy is near dark in warm and wind-still conditions. For this reason, Olfert and several colleagues are currently working to develop an online tool that provides geographically specific growing degree day calculations that would forecast wheat midge emergence. This, combined with provincially available forecast maps developed on the basis of the previous season’s larval cocoon counts, will go a long way towards helping producers make more informed spraying decisions.

“The economic threshold when yield is the primary consideration is one adult per four to five heads in several locations in the field. The threshold is a little lower – one adult per eight to 10 heads – when No. 1 grade wheat is typically expected. We don’t have a handle on the negative impact that incorrectly applied pesticides have on wheat midge’s natural enemy. But, if you’ve only got one adult in more than 10 wheat heads, you certainly shouldn’t be spraying at all. Yes, you’ll get a little wheat midge activity, but leaving the midge and the parasitoid active means the parasitoid has free range all summer long to increase control and pull up its numbers,” says Olfert.

Recognizing the value of the parasitoid, all wheat midge-resistant cultivars are now sold with five to 10 per cent susceptible wheat so the parasitoid can survive on the midge population confined to the susceptible plants. Some producers choose to be even more proactive in order to support the development of a healthy parasitoid population.

“When we go to producer meetings in some areas that are newly infested, there are usually a few farmers that have one or two fields (in which) they are willing to risk yield just to make sure the parasitoid gets established. There are always some people who are thinking ahead. It’s a good technique, one we would recommend in areas where we are sure there are parasitoids but they are still in low numbers,” says Olfert.

While Olfert does not expect all producers to follow suit, he does recommend that all producers keep the parasitoid in mind when making any pest-management decisions. After all, working with nature is less expensive, more effective and better for the environment than jumping directly to the chemical option. 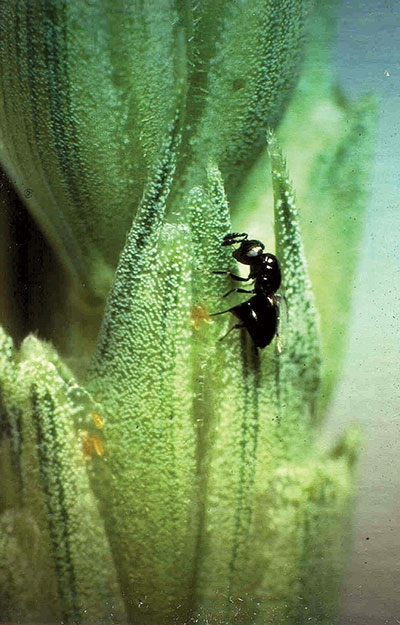