Across Western Canada, researchers have been working on Fusarium head blight (FHB) resistance improvements for wheat. Over the past few years, there have been some positive advances; however FHB is a very challenging disease to work with and the breeding effort is slow. Overall there is much work being done from many different groups, with significant resources and investment into improving FHB resistance in wheat.

“Fusarium is one of those diseases that are quite resource intensive to test for and to work with,” explains Dr. Anita Brule-Babel, professor, department of plant science at the University of Manitoba. “As a winter wheat breeder, I have several collaborative projects underway, including some with objectives to breed for FHB resistance. We have several graduate student projects in place, including mapping new FHB genes and the development of markers for wheat and barley. Through various collaborations, we are working with many researchers to try to identify and advance marker development. Markers will help us to be able to combine multiple sources of resistance together to make varieties more resistant and also to facilitate and speed up the breeding process.”

Brule-Babel also runs a large FHB screening nursery for all the breeders in Western Canada at the Ian N. Morrison Research Farm in Carman, Man. The breeders send their material to the nursery for screening, special tests and co-operative registration testing, and they receive data in return, including data for variety registration documents. In 2013, 3500 winter wheat lines and about 16,000 spring wheat lines were tested in the nursery.

“We are seeing improvements in varieties in terms of resistance that are being registered for both spring and winter wheat varieties,” says Brule-Babel. “Across the classes of wheat, the most progress has been in the red spring wheat class (CWRS), which is the biggest of the crops and has the most investment. There has been a significant improvement in this class.”

Improvements in some of the newer classes, such as hard white wheat, are being made, but they are taking a bit longer. Amber durum continues to be one of the most difficult wheat types to breed FHB resistance because really good sources of resistance are difficult to find. Researchers at the University of Saskatchewan have identified resistance in a relative of durum, but it will take time to breed that resistance in, and regain the good qualities of, an amber durum.

“Although there are lots of breeding efforts underway, to date FHB resistance is not complete as compared to resistance for other diseases such as leaf or stem rust resistance,” explains Brule-Babel. “There are many FHB resistance genes with small effects, phenotyping is difficult and the host-pathogen interaction is not well understood. Another challenge is that FHB reaction must be evaluated on multiple plants from the population at the adult plant stage, making controlled environment screening more difficult. As well, the interaction between resistance types complicates evaluation and selection.”

Other researchers have characterized five types of resistance to FHB. Type I, which is resistance to initial infection, and Type II, which is resistance to spread within the spike, are the most understood. “We have a pretty good handle on these two types of resistance and that gets us part of the way. However, on the market side, grain is graded by Fusarium damaged kernels (FDK), but customers are interested in the DON toxin levels. The most economically important forms of resistance (i.e. DON) are the most difficult to evaluate and are not well understood. Under some conditions there may be a low correlation between visual symptoms and DON, and FDK does not always predict DON.”

In general, the different types of resistance should be linked, so if there is less FHB infection, then there should also be less DON. However, Brule-Babel has recently found a couple of lines that symptoms-wise were identical, but one line had 22 ppm DON while the second line had 1.5 ppm DON. “This is a massive difference in DON levels, so we are looking at the next stage of DON resistance to address this question. For example, we are trying to determine whether we can get wheat to metabolize and degrade DON so it doesn’t accumulate in the seed. This is not an easy thing to work with, but we are trying to move efforts forward in this area. Researcher Lily Tamburi-Illincic at the University of Guelph recently released a new line rated MR but with considerably lower DON than other lines rated as MR. So some advancements are being made to address this challenge.”

Fungicide-resistance interaction affects DON
In another project, a graduate student is looking at the differences in the response of MR and susceptible lines and the efficacy of fungicides of different genotypes. It was found that when there is a high risk of an epidemic, growers should have already grown a more resistant variety to make the fungicide application work.

“We’ve found in some cases, depending on the level of epidemic and genotype, that an application of fungicide to a susceptible variety may actually increase DON levels,” explains Brule-Babel. “We suspect that although it seems the number of lighter, highly infected kernels are reduced, actually the combine is retaining more of the heavier kernels that are still heavily infected with Fusarium. However, when growers use a MR to intermediate variety and apply fungicides, this doesn’t happen to the same extent.”

Therefore, when using fungicides, growers need to make sure they already have some good genetics to support that fungicide or they won’t get the results they want. Fungicides don’t do the job completely nor does the resistance do the job completely, but together they improve things considerably.

“Growers also need to pay attention to disease forecasts and risk maps to understand the risk of infection,” says Brule-Babel. “There are good forecasting programs such as the FHB risk models in Manitoba and DONcast model in Ontario. If the conditions at flowering aren’t right for Fusarium infection, then growers don’t necessarily need to be worrying about a fungicide application.”

FHB requires a multi-pronged management strategy that includes using fungicides when needed, but to also work with the whole toolbox of alternatives to reduce the risk of selection pressure for resistance to fungicides. Like herbicides and insecticides, it is well known that overuse of fungicides can lead to the risk of selection for resistance. Therefore, growers should also use different modes of action if they are applying fungicides year after year. Rotation is always a good idea for diseases, but this may not be the answer for FHB as there are a lot of other unknowns and inoculum can move around between fields. The FHB pathogens are necrotrophs that live on dead tissue and aren’t that selective, so even canola or other crop stubble can host the pathogens.

“As we advance our FHB resistance breeding efforts, we are continuing to apply new tools to our work,” says Brule-Babel. “Some of the new molecular tools are very exciting, they are cheaper and faster and we can do more with them. We are always struggling with our breeding programs to find the balance between resources available for molecular tools and the phenotyping in the field. The tools help advance our efforts, however the results still have to be proven in the field. We expect to see continued advancements in FHB resistance for all classes of spring and winter wheat and other cereals such as barley in the future.” 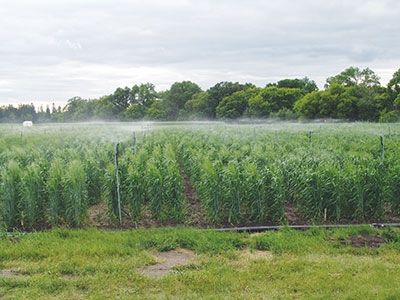 After each FHB inoculation Across Western Canada