Without resistant wheat varieties, wheat midge would be causing about $60 million in damages per year on the Canadian Prairies, according to Curt McCartney, a research scientist with Agriculture and Agri-Food Canada (AAFC). “There is a strong incentive to have resistant varieties for farmers,” he says. 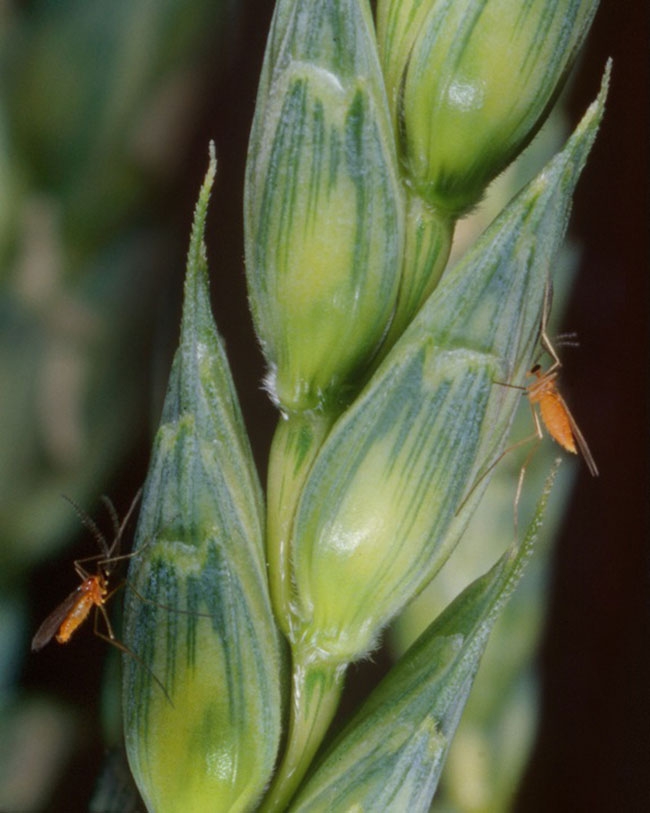 McCartney, who is located at AAFC in Morden, Man., and Alejandro Costamagna, assistant professor in the department of agriculture and food sciences, entomology, at the University of Manitoba, are tackling the challenge of maintaining and enhancing wheat midge resistance from some innovative angles.

Known as the orange wheat blossom midge (Sitodiplosis mosellana), this little orange fly – about half the size of a mosquito – is a big pest. The larvae feed on wheat kernels, causing downgrading and yield losses. Resistant wheat varieties are the key tool for managing wheat midge; other tools include crop rotation, insecticide application, and a parasitic wasp (Macroglenes penetrans).

The first Canadian varieties with wheat midge resistance became commercially available in 2010. Now, over 20 Canadian spring and
durum wheat varieties have this trait. It is more effective in spring wheat than durum, but all the varieties marketed as being tolerant to wheat midge rely on a single gene called Sm1.

“When a variety has this Sm1 gene, it will kill wheat midge larvae once they start feeding on a wheat kernel. This type of resistance is called antibiosis. The larvae die when they are very tiny and they don’t cause much damage to the kernel so there is negligible downgrading at the elevator and yield loss is basically zero in spring wheat,” says McCartney, who specializes in cereal genetics and the development of DNA markers. “However, we’re very concerned that Sm1 will become ineffective over time. Similar insect resistance genes in wheat have become ineffective once the varieties are grown on very large acres because the insect eventually adapts to the presence of the gene.”

One crucial strategy to help prolong the effectiveness of Sm1 is
already in place in Canada. “The technique developed and implemented by industry is sometimes called ‘refuge in a bag’ or an interspersed
refuge system,” Costamagna says. With this method, each midge-resistant wheat variety is sold as a varietal blend, where 90 per cent of the seed in the bag is a midge-resistant variety and 10 per cent is a midge-susceptible variety. The susceptible 10 per cent is called the refuge.

The refuge ensures that some midges in the wheat field are not exposed to Sm1, so there is less selection pressure for midge strains that can overcome Sm1, which are referred to as virulent strains. “The refuge allows some susceptible midges to be maintained in the wheat field, and the susceptible midges can mate with virulent midges. As a result, it takes longer for the virulent midges to become the dominant strain in the population,” Costamagna explains. “The refuge also helps maintain populations of the parasitic wasp that attacks the midge. The parasitoids by themselves don’t completely control the midge, but they certainly contribute to keeping the midge population down.”

However, Costamagna cautions, “While the refuge-in-a-bag method will extend the efficacy of the Sm1 gene, we know from many other pests that insects will adapt to the genetic resistance in plants.”

Research efforts also involve working with breeders to check for Sm1 in their candidate varieties. “AAFC and the University of Manitoba have an ongoing collaboration to test wheat lines in the western Canadian co-operative variety testing system to see whether or not they have Sm1,” McCartney explains. “The breeders collect samples of wheat heads from their yield plots across the Prairies and send them to our lab at the University of Manitoba. The wheat heads are examined under a dissecting microscope, and we classify the kernel damage as being consistent with either a susceptible wheat or a resistant wheat.”

The Sm1 gene’s presence in North American wheat germplasm has not been completely tracked from its origins in European winter wheat varieties and because of this it can arise in unexpected places. For example, through the co-op testing, researchers found a number of soft white spring wheat lines from the Lethbridge breeding program that had Sm1 even though the program had never deliberately made crosses to bring Sm1 into its lines.

“It’s a significant issue because, if you don’t know the gene is present in a variety, then the seed would not be packaged in a varietal blend when it goes to farmers,” McCartney notes. These days all candidate wheat varieties are tested to see if they have Sm1.

Among the varieties with Sm1, some have stronger resistance than others. For example, previous research discovered that this gene functions better in the variety Shaw than in other Sm1 spring wheat varieties, like Goodeve. So, McCartney is looking into the genetic differences between Shaw and Goodeve to understand why Shaw’s resistance is more effective. The results from this work could help breeders develop other varieties with improved Sm1 functionality.

McCartney is also working on DNA markers for Sm1. A DNA marker is a sequence of DNA that is associated with a particular trait, in this case wheat midge resistance. “The DNA markers allow breeders to select for Sm1 in the absence of the insect in the nursery. In any given year you may or may not have wheat midge just because of natural fluctuations in the insect population,” he explains.

“The markers also give the breeders greater ability to track the inheritance of Sm1 in their breeding program. As well, once a breeder has extracted DNA from different plants in the breeding program, the DNA can also be tested for markers for other important genes at the same time.” He adds that a skilled technician can extract and test DNA from about 200 samples in about eight hours, so using DNA markers is much more efficient than having to take weeks or months to grow seeds into plants and test them for the traits of interest.

A DNA marker is usually near the gene’s location on the chromosome, but the marker may not actually be part of the gene so it might sometimes predict the gene’s presence when the gene isn’t actually there. That has been the case with the Sm1 markers, so McCartney and his colleagues have been working to make more precise markers.

“There seems to be a lot of mixing and matching of the DNA in the area of the chromosome where Sm1 is located, so even markers that are fairly close to the gene are not always associated with the gene. However, the closer you get to the gene, the more associated the marker will be with the trait. So, we are working on getting as close as possible to the gene,” he explains. “We’ve gotten very close now, and through collaboration with our colleagues at the University of Saskatchewan, we’ve identified a DNA marker that we believe is very predictive.” University of Saskatchewan wheat breeders are already using this new marker.

McCartney is searching for additional resistance genes that are similar to Sm1. “To do this, we are testing wheats that have been collected from different parts of the world, from different collections like AAFC’s Plant Gene Resources of Canada in Saskatoon. We grow the wheats in field trials where wheat midges are present, and we dissect the spikes to see if there is any evidence of resistance.”

McCartney and Costamagna are investigating another resistance mechanism called oviposition deterrence (egg-laying deterrence). “This mechanism can reduce egg laying by female wheat midges that land on the wheat spike by about two-thirds, compared to a susceptible plant; however, the amount of the reduction differs quite a bit between varieties,” Costamagna says. In at least one wheat variety, the trait also causes the female to lay eggs farther from the florets, so the tiny, newly hatched larvae have to travel longer distances to feed and have a greater risk of desiccation.

A long-term goal in this research is to combine both oviposition deterrence and Sm1 in wheat varieties. “This could help achieve higher control of the midge, but more importantly, it could further delay the wheat midge’s adaptation to resistant varieties, since it is much more difficult for a pest species to adapt to two separate genes with different modes of action,” Costamagna explains.

Costamagna is also collaborating with McCartney on extensive field trials to identify sources of oviposition deterrence in different cultivars. Oviposition deterrence seems to be less effective than Sm1, but possibly breeders could make it more effective by crossing different wheat lines with the trait. “We are looking for markers for oviposition deterrence in both spring and durum wheat,” McCartney notes. “We have good sources of the trait in spring wheat – the variety Waskada carries this trait and a few varieties from the U.S. have it as well. In durum wheat, two old unadapt lines have the trait. We’re trying to understand how many genes are involved in the trait and developing markers for that resistance in these different sources of the trait.”