Providing a boost for soybean plants through seed treatments has been a strong area of focus for companies for many years now, and 2015 is no different. Syngenta’s seedcare technical lead, Chris Denys, says the future for seed treatments in the Canadian marketplace looks very good.

“Seed treatments protect the seed and seedlings, ensuring that plants get off to a healthy, vigorous start, which ultimately translates into yield and quality improvements,” Denys explains. “This has been, and remains, the most important benefit of seed treatments. Simply put, our customers invest a lot in their seed and they want to do everything possible to help ensure that those seeds realize their full potential. Beyond that, growers increasingly look to seed treatment technology for other things that contribute to the profitability and sustainability of their farm operations.”

In his view, this includes optimizing seeding rates (due to improved plant stand), minimizing the need for replants, extending the application window for in-season pesticide applications when needed, supporting earlier planting practices and complementing trait technology to manage pests. He says as the complexity of farming increases, whether that is a function of volatility in commodity prices, increasing farm size, climate change or any other number of factors, crop farmers look to technologies like seed treatments to help ensure their success.

Derrick Rozdeba, marketing communications lead at Bayer CropScience, agrees. He says growers are continually looking for new and improved innovations like insecticide options and alternatives for Ontario (where neonic seed treatments usage is currently critically restricted on corn and soybeans), management of soybean cyst nematode (SCN) or sudden death syndrome (SDS), and options for glyphosate-resistant weeds and fungicides for white mold management, to name a few.

“Clariva pn treated soybean seeds will take current SCN management programs to the next level by reducing SCN feeding and reproduction,” Denys says. “Clariva pn contains the Pasteuria nishizawae  bacteria as its active ingredient.” When Clariva pn treated seed is planted, the bacterial spores are released into the soil and establish a protective zone around the young soybean plant’s roots. Clariva pn is compatible with, and can be ordered along with, Syngenta’s Cruiser Maxx Vibrance Beans and Vibrance Maxx seed treatments.

Fortenza is Syngenta’s other new offering in Eastern Canada, described as a new alternative class of insecticide chemistry in corn that provides early-season insect control of European chafer, wireworm and cutworm. It is combined with Maxim Quattro seed treatment to provide control of several seed-borne and soil-borne pathogens including Fusarium, pythium, rhizoctonia and aspergillus and  penicillium fungi.

Bayer CropScience is working on a new system called Balance GT Soybean Performance System, with regulatory approval pending. It aims to provide exceptional performance coupled with outstanding weed control. “Balance GT soybeans will be tolerant to both glyphosate and isoxaflutole, the active ingredient in new Balance Bean herbicide and ConvergeFlexx for corn,” Rozdeba explains. “These two chemistries will ensure protection against a variety of weeds.”

When released, Balance will be the first step in a foundational system that will grow to include a triple-stacked herbicide tolerant soybean. Rozdeba says the first of these additional stacks will provide tolerance in soybeans to glyphosate, Balance Bean and glufosinate, the chemistry found in Liberty, and will enable growers to harness three modes of action on one soybean.

Bayer CropScience is also hoping to introduce a new seed treatment in 2018 (pending registration) called iLevo, for control of SDS in soybeans. “This is a very exciting new chemistry and a growing issue in Ontario,” Rozdeba says.

BASF Canada will also launch a new soybean inoculant in the fall of 2015 to the eastern Canadian market. “The new Nodulator PRO 225 will increase yield potential for growers up to eight per cent compared to competitor products,” notes Ariel Gohlke, inoculants brand manager. “Unlike other soybean inoculants on the market, Nodulator PRO 225 features a unique-to-BASF 532C strain of nitrogen fixing rhizobium that was developed for the Canadian market, and a second rhizo-bacteria (B. subtilus) that suppresses disease, promotes root growth and nodulation and improves overall root health.”

Neonic issues
In Denys’ view, neonicotinoid seed treatment technology remains extremely important to agriculture across Canada, both within Ontario and in other provinces. “For example, one of the most frequently cited examples of both the importance and success of this technology is in the production of canola on approximately 20 million acres in Western Canada, which could not be achieved without the use of this technology,” he notes. “And, it is well documented that the use of this technology on a bee-attractive crop such as canola works well for both farmers and crop production, and beekeepers and honey production.”

Denys notes that in the past decade, the number of honeybees in Canada has reached near-record levels, with the majority of colonies in Western Canada, where canola has become one of the most important crops. The health of hives in Western Canada remains high as these two parts of the agriculture sector work side-by-side, he says. “Here in Ontario, we’re concerned that arbitrary reductions on the amount of neonic treated seed planted is not supported by science,” Denys explains. “Recent reports from both the Canadian Standing Senate Committee on Agriculture and Forestry and the White House Pollinator Health Task Force in the U.S., for example, have recommended markedly different approaches to dealing with bee health. Furthermore, such a move undermines the competitiveness of Ontario farmers and puts them at a disadvantage relative to farmers in other jurisdictions in Canada, the U.S. and elsewhere that continue to have regular access to this technology.”

Rozdeba agrees that neonic seed treatments are still an important market outside Ontario. He says growers still have the option to use seed treatments as a valuable protection tool on the 40 per cent of Canadian soybeans grown outside of Ontario. 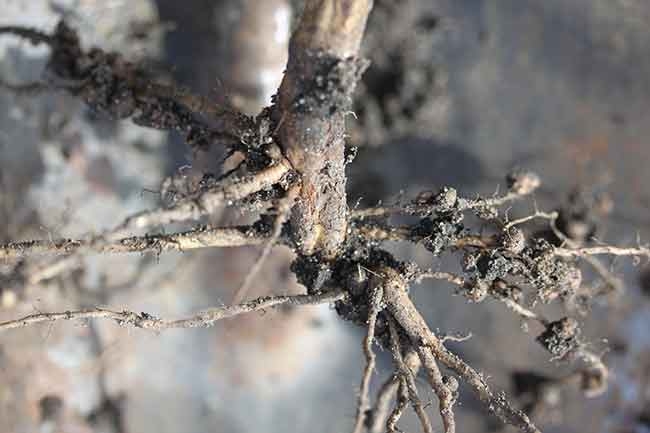 An image taken using a macro lens. The small white dots on the roots are soybean cyst nematode. Providing a boost for soybean plants through seed treatments has been a strong area of focus for companies for many years now