Over the years, Canadian soybean growers have earned the reputation of producing some of the best identity-preserved (IP) non-GMO soybeans in the world. One of the reasons for this reputation, according to Eric Gagnon, research and development manager at Sevita Genetics, “has been our decision as an industry to invest in research and development and continuously develop new and better varieties for Canadian farmers to grow.”

Gagnon is leading a project that is a good example of this ongoing effort. The project is using molecular markers to screen breeding material for diverse traits, and selecting the most promising lines to develop new non-GMO varieties targeted to soybean food, feed and oil market demands.

“There has been substantial investment in research to develop new genetics that will enhance the quality and productivity of IP non-GMO soybeans grown by Canadian farmers. This project aims to build on existing research and commercialize it to benefit Canadian farmers and the food-grade soybean industry in general,” he explains. “Our hope is that the use of molecular markers as tools for selection will differentiate Canadian IP non-GMO soybeans even more in the market place.”

A molecular marker, or DNA marker, is a short sequence of DNA associated with a particular trait. Researchers use these markers to quickly screen germplasm in the lab for the desired traits, making their breeding efforts more efficient and effective.

The project, which runs from 2013 to 2018, involves screening a lot of breeding lines, so using markers is a big help. Gagnon says, “At this point, we are screening a few hundred lines for each trait, but as the material becomes more and more promising with each round of backcrossing, we could easily reach thousands, even tens of thousands of lines to be screened each year.”

The project team has obtained germplasm through various exchanges of breeding material with other breeding programs and gene banks. Also, a few of the gene sources are the result of Sevita’s past collaborations with Agriculture and Agri-Food Canada (AAFC) at Harrow and Ottawa under the Developing Innovative Agri-Products, a Growing Forward 1 program.

“Many of the target genes in this project have been characterized, the markers have been developed and published, and now it’s up to breeding programs to backcross these traits into high-yielding genetics,” Gagnon explains.

“The first step is to breed these traits into a genetic background that is adapted to Canadian growing conditions. When that’s done, it is a matter of using these markers to assist in stacking complementary traits together in high-yielding varieties, doing yield assessments on the developed lines and testing whether they are markedly different from existing varieties. Hopefully we will develop varieties that will be completely distinct from any other variety on the market.”

The markers used in this project have been verified in-house by Sevita Genetics’ senior research scientist Zhiyong Zhang in collaboration with Trent University. Sevita Genetics’ breeders are crossing promising lines at Inkerman, Ont., and its molecular marker team is conducting the screening at Saint-Cesaire, Que.

For example, they are screening for lipoxygenase, which is a type of enzyme. “Lipoxygenase breaks down long-chain fatty acids causing a ‘beany flavour’ in soymilk and tofu when processed,” he explains. “We currently use molecular markers to identify varieties without lipoxygenase so they do not have a beany flavour.”

The fatty acid composition of soybean oil is another area of interest. The project team is using markers to develop varieties with high levels of oleic acid. This heart-healthy fatty acid has a natural stability, which helps food products to maintain their freshness.

As well, the team is looking for low-phytate soybean lines, which are important for animal feed, especially swine rations. Gagnon says, “Phytate is an anti-nutritional in soybean that ties up available phosphorus in the digestive tracts of animals. Varieties with lower levels of phytate mean more phosphorus is available for digestion.” That’s good for the animal. And it’s also good for the environment – if the animal digests more of the phosphorus in its ration, then less phosphorus goes into its manure, which helps reduce the risk to water quality.

The project team is also using markers to identify soybean lines that are better for making firm tofu, based on the ratio between two types of soy proteins.

On the agronomic side, the team is using markers to assist in the development of elite Canadian varieties that have resistance to important soybean pests like soybean cyst nematode and aphids.

Gagnon is pleased with how the project is going so far. “We have already made an impressive amount of progress in breeding these traits into adapted Canadian varieties. Some of the lines containing traits of interest are already in yield trials this year and are being compared to varieties already on the market. The material has improved dramatically with the use of molecular markers, and we look forward to the results this fall. We have also begun to stack traits together to further develop lines with multiple traits of interest.” 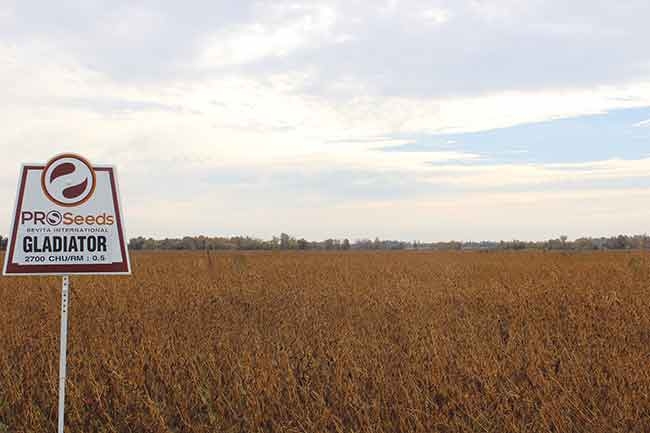