Features Agronomy Harvesting
Sowing the seeds of an idea

Is it practical for farmers on the southern Canadian Prairies to harvest two crops on the same field in the same growing season? It’s an intriguing idea that Jamie Larsen thinks just might work – especially in warmer areas that have irrigation and if one of the two crops is a winter cereal that can be taken off for silage. 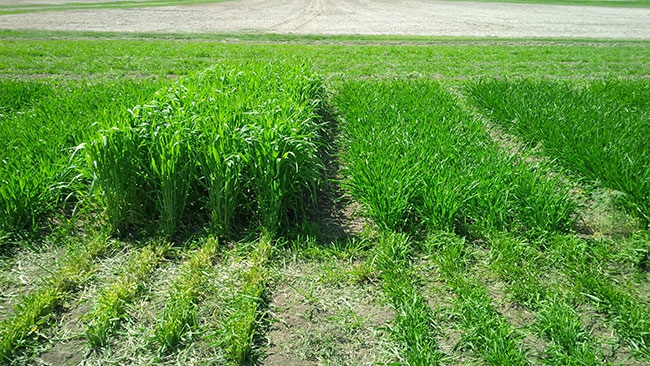 Compared to crops like winter wheat Is it practical for farmers on the southern Canadian Prairies to harvest two crops on the same field in the same growing season?

Larsen, a research scientist with Agriculture and Agri-Food Canada (AAFC) in Lethbridge, is a cereal breeder whose work includes rye and triticale. Although triticale hasn’t really taken off in Canada, Larsen noticed winter triticale is often grown in double-cropping systems in Europe and the United States.

“Dairy farmers will grow winter triticale and silage it off, and then grow corn after. With this system, they are really increasing their yields in terms of biomass and tonnage, and it is quality forage,” he explains. “So I wondered if that type of system could work here. In southern Alberta, we have a fair number of growing degree days and we have irrigation, so that gets around some of the possible limitations to double-cropping.”

Larsen recognized double-cropping could offer important benefits to producers. Research shows silaging is a great way to control tough weeds, like herbicide-resistant wild oats, which can cause big problems in typical spring-seeded annual crop rotations. And given southern Alberta’s livestock industry, there are good opportunities to use silage. As well, for farmers growing a winter cereal, a second crop would help protect the soil from erosion and loss of organic matter after the winter cereal is harvested. And a double crop would make greater use of the heat, moisture and nutrients available over the entire growing season, compared to a single crop.

In short, double-cropping could be a way to enhance the productivity and sustainability of agricultural production systems in the southern Prairies.

Doing the math
To see whether double-cropping might work in theory, Larsen examined weather and crop stage data for the last 10 years in southern Alberta.

Rob Graf, a research scientist who is also at AAFC Lethbridge, provided Larsen with some great data from winter cereal trials conducted each year. That data included details like dates for seeding, heading and maturity. Heading timing is important in Larsen’s calculations because at and around heading is the optimal stage for cutting rye for silage, and because this timing also coincides with crop insurance timing for seeding the second crop and with having sufficient growing conditions to take that second crop to maturity.

Cereal growing degree days are based on accumulated degrees above 0 C because cereals are able to grow when the temperature is above freezing. “For instance, in November, if the temperature is above 0 C and the soil isn’t frozen, a winter cereal would still be growing – really slowly, but it would be growing. In the Lethbridge region, its growth would end in November, typically, or even December in some years, and it would start growing again in about March.”

That leaves about 1970 degree days for a second crop, which is enough to grow a wide range of crops such as barley, oat, canary seed, flax, chick pea, canola, pea and sunflower. Of course, not every crop that needs fewer than 1970 degree days would be a good choice for a second crop; for instance, crops like pea don’t do well in hot conditions. But there are diverse possibilities that could be evaluated.

Larsen’s next step was to look at growing season precipitation. In southern Alberta and some other parts of the Prairies, most of the rainfall usually comes during the period from mid-May to the third week in June. The heading dates for fall rye and winter triticale typically occur towards the beginning of this rainy period. “So in theory, if you were to cut triticale, rye or even wheat at that time, you would have a replenishment of rain water, as well as irrigation, to get a second crop through to harvest,” he says.

And as a final step, Larsen delved into a detailed Alberta dataset developed by Stefan Kienzle at the University of Lethbridge. It shows a lengthening growing season over time, a trend that supports the increasing probability of having enough growing degree days to make double-cropping work.

Is it practical?
It’s a neat idea, but a number of pieces would need to be put into place to make double-cropping a success on the southern Prairies.

One of those pieces is crop performance data in the context of double-cropping systems. Most of the Prairie information on spring-seeded annual crops is based on seeding dates in April or May and a full growing season. “We know generally what the crop quality and yield will likely be in that situation. But for instance, if we plant them as a second crop in June, then how do those crops react?” Larsen asks.

He says some previous research by agronomist Ross McKenzie indicates that in certain crop types, later seeding causes yields to go down but protein levels to go up, which could be a benefit for some crops. With canola, later seeding changes the oil profile, which may be an issue. Larsen also notes that within each crop type, some varieties may be better suited than others to double-cropping systems. So comparisons of different crop types and varieties under double-cropping conditions would be needed to see which options work best.

Also, agronomic practices may need to be adjusted to suit double-cropping systems. For instance, a crop’s disease and/or insect pest spectrum could be different when it is seeded later as a second crop. One example is stripe rust, a serious disease in southern Alberta that tends to arrive later in the season. Stripe rust could have a significant impact on a susceptible crop that’s seeded later.

Moisture levels could also be a concern in some years. Larsen explains, “The first crop in a double-cropping system can use up a lot of moisture. In a really dry year, there might be moisture issues for the second crop, even on irrigated land.”

Another consideration is how much extra production growers might get for the extra work of growing a second crop. Larsen notes, “You may be thinking that double-cropping would mean one crop plus one crop equals two crops. But in reality it might be more like 0.75 plus 0.5, so 25 per cent higher than having just one crop, or it might be less, maybe 10 per cent higher than having one crop.” This less-than-double productivity is the result of a variety of factors related to growing conditions, temperature, moisture and day length. He says, “Seeding late can cause reduced tillering, possibly due to photoperiod response. This needs to be looked at and why a higher seeding rate for the second crop might be critical to counter the late seeding date.”

Another issue is that crop insurance is not currently available for two crops harvested on one field in a single year. Also, the timing of operations in double-cropping systems may conflict with the timing of operations in single cropping systems. “For instance, taking off a fall cereal at the time we’re suggesting would probably line up with when farmers are spraying. So from a farming logistics perspective, it could take some thinking to make it work,” Larsen says.

He has talked to some Alberta growers who are already trying double-cropping. “A few southern Alberta growers are using hemp as a second crop. They have planted a winter cereal, rye, I think typically, and they silage it off in the first or second week of June. Then they plant hemp into that. Hemp’s normal planting time is the middle of June so that system should work quite well,” he says.

“Southern Alberta has enough growing degree days to do double spring-seeded cereal silage crops. So some growers are planting barley really early, at the end of April or early May, and they cut it for silage. Then they plant a second spring barley crop.”

He adds, “As more farmers try double-cropping, who knows what crops could fit? Maybe dry beans or some other really short-season crops could fit into that window for the second crop.”

Double-cropping research
Larsen is working on several research efforts that could help make double-cropping successful. In particular, he is breeding fall rye and winter triticale varieties with earlier heading dates.

“Think about our rainfall patterns where most of the rain comes between mid-May and the third week of June. If you can move the winter cereal’s heading date back even a week, that would be quite important in terms of the moisture and growing degree days available for the second crop,” he explains.

The desirable crop stage for silaging varies for fall rye and winter triticale. “Although the optimum for rye is at or around heading, the tonnage goes up as it fills grain, but the quality goes down due to the ‘stemminess’ of rye. Some people are okay with the lower quality and higher tonnage; it depends on the producer. Triticale is a higher quality feed and maintains the quality longer while it builds tonnage over the grain fill period. Its optimum cutting time is the soft dough stage.”

Some of his triticale lines look very promising in terms of the timing of grain filling. “Rye heads out quite early, but it doesn’t actually flower until a week to 14 days after that and then starts to set grain and fill. Some of the triticale lines in my program head out about two or three days later than rye, but they start grain filling two days after that. So these lines will start building energy and quality in the silage even earlier than rye, which would facilitate the whole double-cropping system.”

Larsen is also working on double-cropping with Eric Page, a research scientist with AAFC in Harrow, Ont. They are looking at various considerations related to how double-cropping could contribute to more productive, sustainable and holistic cropping systems.

This fall, Larsen is leading a new trial to test how double-cropping might work in southern Alberta. This trial uses fall rye as the silage crop and involves several treatments. “For example, we’re going to time the cutting of the rye silage so we can seed wheat or barley as the second crop within their seeding dates for crop insurance. We’re going to compare that to letting the rye grow until it gets to the optimum biomass yield stage, and then we’ll plant the second crop after that.”

He adds, “This is really our first look-see at double-cropping. The math works, but does it really work from a practical perspective? We’re planting small plots so it’s not a big deal for us to take off the first crop and then go in the next day to seed the second crop. But the logistics from a farming perspective could be a challenge.

“So we want to get the idea of double-cropping out there. We want to do some research to see how it might work, and then see if it’s interesting to [growers and agronomists] and if they start thinking about what they might do to make it work.”