In Western Canada, wild oat continues to be one of the most problematic weeds. As part of an integrated weed management strategy, researchers continue to look for additional options and different lifecycle timings to reduce populations, frequencies and herbicide resistant populations. 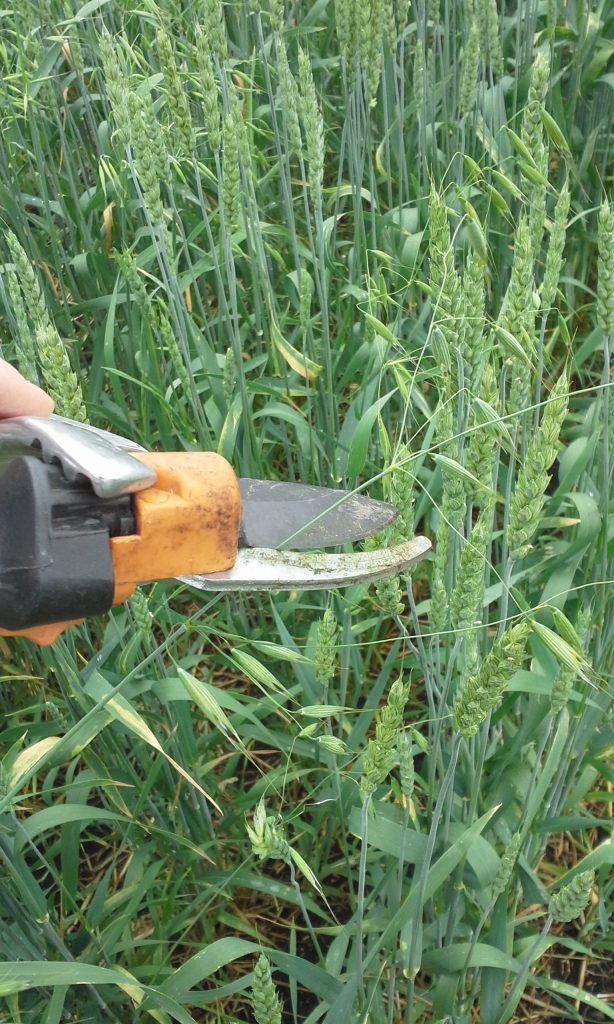 “We started getting questions around the possibility of removing the seeds heads to prevent seed set as another strategy for managing wild oat populations,” says Breanne Tidemann, research scientist with Agriculture and Agri-Food Canada (AAFC) in Lacombe, Alta. “However, before we could answer that question, we realized it was also important to determine when the wild oat seeds become viable after panicle emergence, and whether or not seeds that drop to the ground will grow.”

In 2015 and 2016, small plot experiments were conducted at Lacombe, Alta., and Saskatoon. Researchers compared two crops (wheat and lentils) to see if crop height and timing made any difference. Prior to crop seeding, wild oat was broadcast across the plots. Along with different panicle clipping timing, other measurements included crop and wild oat emergence densities, crop height, wild oat height and lowest panicle spikelet height.

“The first panicle clipping was made when most of the panicles were visible above the crop canopy and then weekly after that until the wild oat seeds began to fall off the panicles,” Tidemann explains. “Because the lentil crop was shorter, we started clipping a week earlier than in the wheat plots. In one treatment, clipping was done once at the early or first clipping and once at the last or late clipping.”

The clipping was done by hand and all of the panicles were collected, with the seed removed and stored for approximately six months. Wild seed has a dormancy period, so storage was required before additional testing. Germination tests were conducted on the collected seeds, and anything that germinated was considered viable. A second press test was conducted on the seeds that did not germinate, and anything that was still structurally sound after being pressed or “squashed” were considered viable, but dormant.

Neil Harker, research scientist with AAFC notes, “the height difference in the crops was an important factor, as we were hoping to be able to prevent wild oat viability by getting in earlier. The shorter lentil crop meant we could get in a week earlier and we could also collect the entire seed head. In the wheat crop, part of the wild oat panicle often remained down in the canopy, making it difficult to cut the entire panicle.”

Researchers also wanted to know if there might be visual indicators on the wild oat awn for viability. Although they did find some indicators that may be useful, basically the wild oat seeds start to become viable as soon as they emerge, so the earlier the panicle can be clipped the better. Typically, when the panicle begins to emerge from the awn, it is straight along the stem axis. Once the awn begins to bend up to a 10-degree angle, seed viability is low at less than 20 per cent. However, once the awn angle reaches 15 degrees, viability can be greater than 50 per cent. Wild oat awn angle as well as seed moisture content may be a good visual indicator of when seeds become viable, but the goal is still to get clipping done early to reduce viability.

A second companion trial with similar treatments is being conducted, except the wild oat panicles are clipped and dropped to the ground, instead of being collected. At the end of following year, the level of wild oat recruitment and crop yield impacts will be measured. This information will provide more information about wild oat seed viability and the impacts of clipping timing.

“If growers have a very resistant population of wild oat, then trying to control a patch by going in and doing hand removal may make sense,” Tidemann says. “However, we are also exploring equipment that may be a more viable option for growers. One option that has been tested is using a modified swather with the canvas removed and the height adjusted to cut just above the crop canopy. We are also testing a CombCut, a Swedish machine designed to remove broadleaf weeds out of cereal crops, and can be adjusted to cut above the crop canopy. Results will be available after the next growing season.

“The overall goal of this and related projects is to find various management strategies for controlling wild oat and other problematic weeds as part of an integrated weed management program,” Harker says. “Herbicide resistance and other challenges require complementary management practices. One of these strategies is trying to limit weed seed production. With herbicides, the target is the seedling stage, but in this project we are looking at another part of the life cycle to try and attack the problem. Finding alternative strategies for reducing wild oat seed viability and removal from the seedbank adds more options to successful integrated weed management programs.”