For the past few years, researchers and growers in southern Saskatchewan have been trialing intercropping. The first intercrops were with chickpea and flax, but this year some other intercrops are being investigated. The results so far from research trials and commercial grower field efforts have been positive and interest is growing.

Lana Shaw, research manager at the South East Research Farm (SERF), in Redvers, Sask., explains the researchers began in 2013 with an initial project studying replicated trials. "Chickpeas are a high-value crop opportunity, but are also a crop with agronomic problems such as diseases, lodging and maturity considerations,” she says. “We wanted to investigate the possibility that the area of adaptation for chickpea could be increased potentially through intercropping strategies. We also wanted to investigate the effect on yield and disease incidence by using an intercrop."

Flax and chickpea were selected as the first intercrop trials, with flax as a nurse crop for chickpea. These two crops are compatible for a few reasons: the herbicide Authority is registered pre-seed on both; both crops have low levels of shattering prior to harvest; and the crops are easily separated using a rotary seed cleaner. Both crops were grown as monocrops for comparison. One application of Proline fungicide was made per season at flowering timing.

"The flax holds the chickpea up and keeps it off the ground, maturity tends to be a bit shorter and quality is improved,” Shaw says. “Overall we are getting good, reliable yields of both flax and chickpea as compared to monocrops, and often the combined yields of flax and chickpea are higher overall than either crop on their own. The intercrop provides some reduced production risk in terms of disease and maturity and improved harvestability, plus no [nitrogen] N fertilizer is required and minimal pesticides are called for. A few growers have been growing large acres of intercrops commercially over the past couple of years and are pleased with the results they are getting so far."

Field observations indicate significant differences in disease levels between trials, with levels in chickpea intercrops lower than in the monocrop when using one fungicide application per season. For example, in 2014 Ascochyta severity was estimated at 17 per cent for intercrops and 51 per cent for monocrop plots at Redvers. Although early indications are showing reduced disease, Shaw is hoping to expand the project to include a more detailed disease assessment process and perhaps seed disease testing to provide better comparisons between monocrops and intercrops.

Chickpea quality was also improved in the intercrop plots when compared to monocrop trials. Shaw is collaborating with Bill May at Agriculture and Agri-Food Canada in Indian Head, Sask., and he confirmed what has been observed in Redvers. "In the 2015 trials at Indian Head, the chickpeas from the intercrop plots had a lot less green seed and better quality at harvest than from the monocrop plots," Shaw says. "Improved quality means better prices and returns for growers, particularly when the cost of a colour separator is added in to separate green seeds out of the sample."

Considerations when planning ahead for an intercrop
The flax and chickpea can be seeded with an air-seeder at the same time, putting the chickpeas down the fertilizer shank and the flax down the seed chute. "We are using this method in our research plots and this would be an easy way for farmers to start," Shaw says. "Some farmers have been altering their drills to be able to seed chickpea and flax in alternating rows. Bill May and I are looking at another research project to compare seeding intercrops in the same row or alternate rows. If we find a big benefit to alternating rows, then it likely is a good idea to alter equipment. However, if there isn't a big benefit, then it likely isn't worth it."

Field selection also matters. Cereal stubble is the best option for growing an intercrop of chickpea and flax. Avoid fields with volunteer canola or wild mustard pressure, as the options for controlling these weeds is poor. Authority herbicide is registered and helps with some weeds, and there are options for grassy weed control, but volunteer brassicas are a problem. One research plot had to be abandoned early in the project because too much volunteer canola emerged ahead of the intercrop.

Planning ahead at harvest is required to set up for separation of the two crops. "There are numerous inexpensive separator options for separating these two crops because of the huge size difference," Shaw says. "One of the strategies that growers are using is to separate the two crops when they [are] hauled off the field. The load is dumped and augered into the separator, then two augers run the separated crops into individual bins. The advantage is, if the chickpea, for example, needs some extra drying, that can be done right away."

Based on the experiences of the researchers and commercial growers, there is potential to use intercropping to add another pulse crop option across much of the southern grain belt in Saskatchewan. "Intercropping has the potential to expand the area adapted to chickpea and a way of increasing yield," Shaw says. "With the wet conditions in parts of southern Saskatchewan in the fall of 2016 causing harvesting challenges, growers may want to consider intercropping as a way to keep chickpeas up off the ground and make harvesting easier and faster."

With the success of the chickpea and flax intercrop, researchers and growers are now trying other intercrops. Shaw has started doing some work on mustard and lentil intercrops. "Two of the options we are trying are lentil and mustard and pea and Clearfield juncea canola, both being trialed commercially by growers as well," Shaw says. "Another intercrop that is in the very early stages is fababean and carinata mustard, a crop being developed for biofuels. This intercrop did very well in the first year and we think has lots of potential. Fababean can be tricky to grow and is prone to weeds, while carinata tends to lodge easily. Both crops have limited weed control options. As an intercrop, the two crops hold each other up and there is much less weed pressure."

Shaw hopes to get some funding in place to expand the research into these various intercrop options and provide good production information to interested growers. 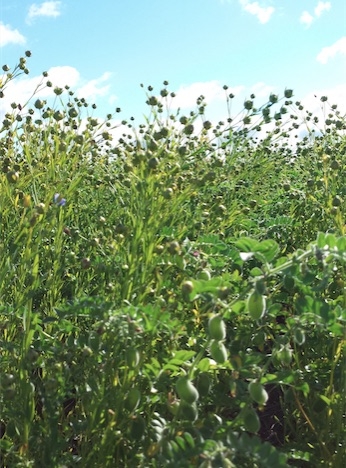