Features Agronomy Soil
WEB EXCLUSIVE: Canola may be as good as barley on moderate saline soils

Recent rounds of wet weather over the past several years may contribute to an increase in salinity appearing in some areas of the Prairies. An increase in surface and subsurface soil water may bring dissolved salts into the rooting zone in concentrations high enough to impede crop establishment and growth. Traditionally, growers have planted salt-tolerant forages on the worst of their saline lands and barley on moderately saline soils.

“Growers are looking for a salt-resistant, non-cereal grain option as an alternative to barley, which is not that economically attractive compared to a crop like canola,” says Bryan Nybo, manager of the Wheatland Conservation Area (WCA) at Swift Current, Sask.

Growers concerned with soil degradation established WCA in 1983 with a special focus on salinity. It is now one of eight Agri-Arm research sites in Saskatchewan. Over the past several years, Nybo has been speaking to growers about research and completing demonstrations on using alternative crops on saline soils. One such demonstration was a 2012 Agricultural Demonstration of Practices and Technologies (ADOPT) trial conducted by Nybo. He demonstrated the option of growing canola in saline conditions.

“This demonstration of newer canola varieties attempted to emulate in the field what has been shown in the AAFC’s Salt Testing Facility by Dr. Harold Steppuhn, where canola has shown tolerance similar to barley,” Nybo says.

The Salt Lab opened at Agriculture and Agri-Food Canada (AAFC) Swift Current in 1988, and has provided practical solutions for Prairie farmers, ranging from the development of salt-tolerant crops and varieties, to assessing crop tolerances to salinity. Steppuhn worked at the Salt Lab for almost 30 years alongside technician Ken Wall, both who are now retired from AAFC. The Salt Lab has since been converted to a service facility, accommodating the research needs and projects of scientists across AAFC’s science and technology branch as well as private industry. 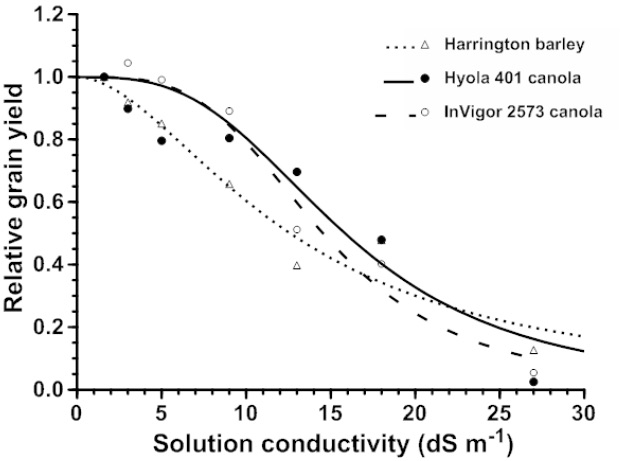 Researchers use arbitrary ratings set up at the U.S. Salinity Laboratory to rate soil salinity. They classified soils with electrical conductivity (ECe) (a measure used by soil test labs) between zero and two deci-Siemens per metre (dS/m) as non-saline, between two and four dS/m as slightly saline, four to eight dS/m as moderately saline and above eight dS/m as severely saline. This corresponds to an approximate rule of thumb where a grower can observe the occurrence of white surface salts that equate to the field’s ECe rating: rarely if ever seen (zero to two dS/m); infrequently seen (two to five dS/m); frequently seen (five to eight dS/m); and almost always seen (greater than eight dS/m).

“We found that hybrid canola was able to perform quite well against Harrington barley, especially the hybrid varieties DK73-75RR and BY 5525 CL,” Nybo says. “EXCEED juncea canola didn’t perform as well as barley.” 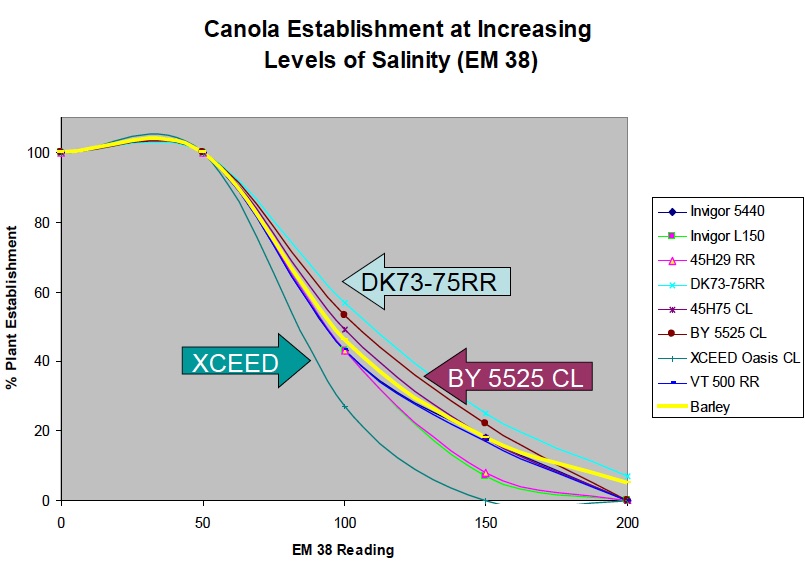 While the ADOPT demonstration was able to show similar results as the Salt Lab in this trial, Nybo admits conducting agronomic work on salinity in the field is difficult because of soil and environmental variability. Salinity can vary from slight to severe within a short distance, making replicated trials difficult. That’s why the Salt Lab is so valuable to growers.

Steppuhn also studied salinity tolerance of camelina compared to InVigor 9590 canola at the Salt Lab as part of the Canola Agronomic Research Program (CARP) project. He found camelina did not have the same tolerance to saline soils as the hybrid canola. His May 2012 final report indicated: “Overall, root-zone salinity affected both camelina and canola grain yields more than it affected seedling emergence, plant survival, seed-oil content, and oil composition. However, as salinity levels increased, the camelina was more affected than the canola in seedling emergence and early survival, plant heights, relative grain yield and oil percentages. The primary impact of this research shows a need for caution when selecting camelina for saline fields that previously produced adequate canola crops.”

Nybo says the results of these demonstrations and research trials show hybrid canola may be an option where barley has traditionally been grown on moderately saline soils. He says because canola may be harder to establish, canola seeding rates may need to be increased. However, on soils higher in salinity, he cautions against growing an annual crop.

“On high salinity soils, you would still want to grow a salt-tolerant perennial forage as the best option,” Nybo says. 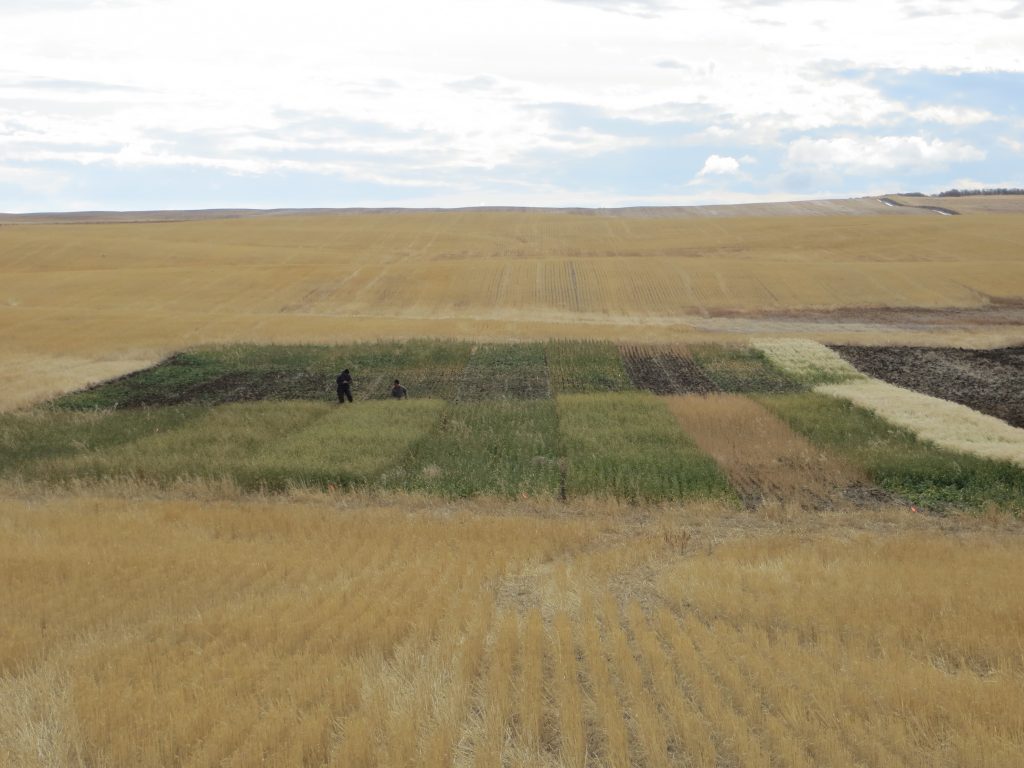