August 22, 2016 - The work is gruelling, especially in the blistering heat of this particular summer. But University of Guelph (UofG) master’s student Meghan Grguric keeps going by reminding herself why she’s researching giant hogweed.

Grguric was at a research site this summer with plant science undergrads, collecting hundreds of bags’ worth of the invasive weed to destroy.

“It was 30 plus degrees and we’re all in Tyvek suits, our rubber boots and gloves with garbage bags, and we’re going around collecting the seed heads of all of the hogweed plants,” she says.

Sporting an old scar on one arm and a fresh wound on her left calf from the plant’s toxic sap, she says, “I look at my burns and think, ‘Why am I doing this to myself?’ It’s all in the name of science.”

Giant hogweed is found in Ontario and British Columbia. Up to 500 known populations grow in Ontario alone, and there are likely many more.

Native to southern Russia, the plant appeared in Canada around 1940. Grguric says it was brought here as an ornamental plant because of its height and general impressive appearance.

But its sap poses a health risk and its size - Grguric has seen plants as high as 13 feet, although it can grow taller - allows it to push out other plants. Giant hogweed thrives near water, has caused erosion near shorelines and is believed to have disrupted salmon spawning in British Columbia.

“It really is a problem because people will ignore it,” says Grguric. “I’ve been to properties where they know it’s a concern but they don’t really tackle it. Or they try to, but they give up.”

Each plant sets thousands of seeds, which can remain viable in soil for years. “Even if it doesn’t germinate the next year, it can germinate years after, so you have to keep on top of it.”

Its sap can cause significant burns. The irritation begins as an itch that reddens and eventually becomes a blister. Pointing at her leg, Grguric says she figures her Tyvek suit rode up without her realizing it.

“If you get some sap on you, the best thing to do is cover it, keep it away from sunlight, and wash it off with soap and water.”

Grguric, who studied plant science and classical studies in her undergrad, hopes to find the best method to deal with giant hogweed.

She was introduced to the invasive weed by plant agriculture professor Francois Tardif and Mike Cowbrough, with the Ontario Ministry of Agriculture, Food and Rural Affairs.

About four days a week during the summer, she travels between hogweed patches cultivated at UofG’s Woodstock Research Station and other sites throughout southern Ontario.

“Roundup doesn’t control the seedlings that pop up and, in general, doesn’t have any soil control, so there is no residual control,” says Grguric. “Basically, you spray it, you kill off what’s there, and new seedlings pop up a few months later.”

She’s also looking at pruning control. Although other researchers have studied the effects of pruning the plant once, no one has looked at continuous cutting. She’s looking at how continuous pruning affects numbers and viability of seeds.

Early summer is when giant hogweed does the most damage. The plants shed their seeds about now before dying off.

Grguric will be back at it again next summer, with the marks on her limbs a reminder of the lengths she goes to for her research. “They’re my battle scars.” 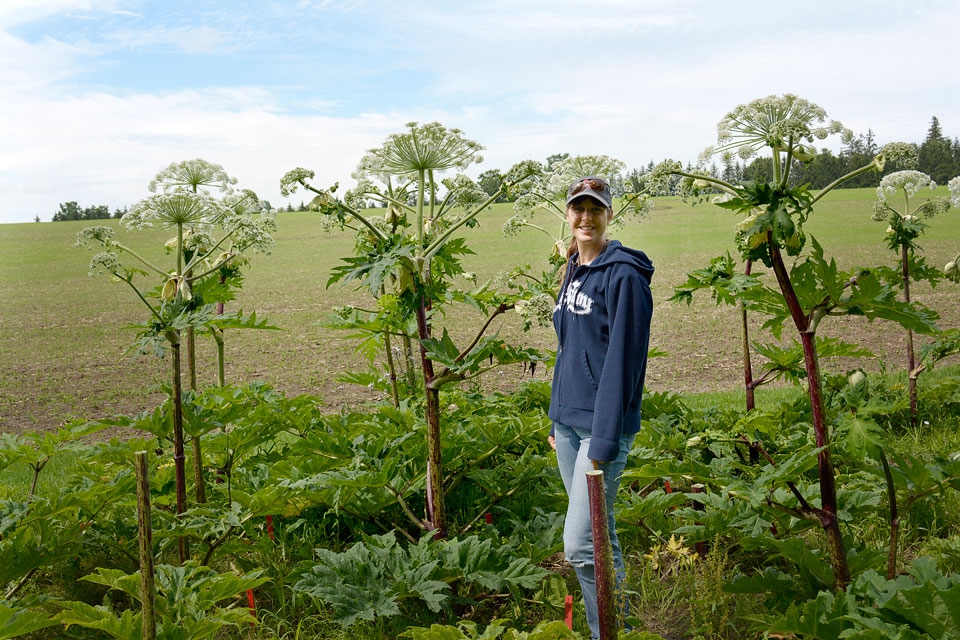