From 2012 to 2014, Page studied giant ragweed growth in three soybean and three corn varieties commercially available in the 1950s, the late 1990s, and currently. The varieties were seeded and fertilized according to recommendations from those eras, and then giant ragweed was transplanted into the crops at two different times – crop emergence and 14 days later. The intent was to simulate giant ragweed resistance throughout planting cycles and different hybrids.

Giant ragweed has become an increasing problem in southwestern Ontario over the past 10-15 years. Recently it has developed resistance to glyphosate, a key component of the main herbicide used in soybean and corn production. Giant ragweed's emergence as a problem weed in these crops, however, likely predates the development of resistance to this herbicide, says Page. Among other factors, a switch from predominantly corn to soybean acreage in southern Ontario is implicated, he says. Also, broad usage of the herbicide has selected for weed resistance.

Breeding changes have played a role. Modern cultivars of soybeans are shorter and more upright than their predecessors. Also, breeding has increased its climatic range. The biggest change in corn breeding has been increased stress tolerance, allowing for a tripling of planting density since the 1950s, as well as increased nitrogen and fertilizer use.

Corn's greater planting density and high canopy prevent giant ragweed from gaining a foothold in that crop, Page notes. "Looking forward, we are encouraging corn producers to practice good crop management and part of this is boosting planting density," he says. "Increased seeding can act as an effective weed control strategy and can help offset the cost and need for herbicides."

Controlling giant ragweed in soybeans is more difficult. The lower canopy of soybeans offers no protection against giant ragweed, and the weed's resistance to the herbicide gives it an advantage. The best prevention is to practice a three-year crop rotation and use a pre-emergent herbicide, says Page. 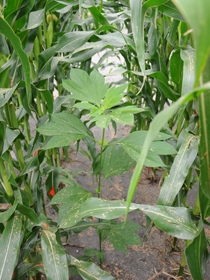