Promising work towards an enhanced breeding toolkit for better standability in barley.

Improved standability is a major objective for barley breeders like the University of Saskatchewan’s Aaron Beattie. But what is the best way to evaluate lodging susceptibility in breeding lines when the weather doesn’t favour lodging, especially given the difficulty of assessing root characteristics, a critical element in lodging risk? Now a three-year project aims to develop easy-to-use tools to assess barley breeding lines for their potential to lodge, even when the growing conditions don’t result in actual lodging.

“Among wheat, oats and barley, barley has the worst lodging problems,” Beattie notes. “After yield improvement, the next biggest thing we hear most often from barley growers is the need for improved standability. That is especially true on the malt barley side where we tend to hang on to older varieties for a lot longer, so that deficiency in the crop really tends to show up compared to wheat or oats, which have a quicker turnover of varieties and the improvements that come with that.”

Beattie is collaborating on this project with Allan Feurtado, associate research officer and team lead at the National Research Council of Canada (NRC). Together, they have enlisted the help of MSc graduate students Michael Taylor and Céline Ferré to complete the project.

Predicting lodging risk
“The project’s foremost goal is to identify key root and stem traits which contribute to lodging resistance in barley germplasm relevant to Western Canada,” Feurtado explains. “But also, roots have been really overlooked in breeding programs, so a second goal is to build a knowledge base on the root trait diversity that exists in barley germplasm relevant to breeding programs like Aaron’s. Finally, another goal is to develop a high-throughput, efficient method to assess lodging potential.”

“If we could identify a tool or a characteristic that we can use as a surrogate to estimate lodging potential in breeding lines, that would be a really big win,” Beattie emphasizes. “Quite often we don’t see lodging in the field, so we can have material move through the program for several years without getting a good indication of its lodging susceptibility or tolerance.”

To achieve the project’s goals, the researchers are: measuring a multitude of root system characteristics for diverse barley lines in indoor studies; assessing two tools for measuring lodging potential in field experiments; and analyzing how well each of those indoor and field measurements predicts lodging. The researchers are conducting these field and indoor studies with several diverse sets of barley varieties and lines.

Innovative field tools
Beattie and his research group started their field experiments for this project with a panel of 12 commercial barley varieties that encompasses a broad array of lodging-related traits. He says, “About half of them are malt varieties and half are feed varieties. They range in height from about 80 to 85 centimetres for some European semi-dwarf varieties to about 120 centimetres for some very tall forage varieties. And they range from a very good rating on lodging to a very poor rating.”

Before this project officially started in fall 2020, Beattie’s group collected data about these 12 varieties over several years and across several locations, including factors relevant to lodging risk, such as grain yields, plant heights and ratings of actual lodging.

In 2021, they started testing two tools for estimating lodging potential, using the 12 varieties. The tools provide information related to the two types of lodging: stem buckling or breakage; and failure of the root anchorage system.

To assess stem lodging resistance, they are using a custom-made device built by Scott Noble in the university’s Engineering College and his students. “To use this equipment, we cut off samples of stems from the field-grown plots, and we place a cut stem across two points. The device has a wedge that pushes down on the stem, and it measures the amount of force needed to break the stem,” Beattie explains. “With that equipment, we also take a small stem cross-section so we can measure things like stem diameter and thickness of the stem’s cell walls, which are typical characteristics associated with stem strength.”

The other tool captures root lodging resistance and probably also stem flexibility. Developed at the University of Minnesota, this device is called The Stalker. It involves a horizontal bar about 1 metre long that is mounted on a vertical shaft, which has a hinge at its base. The bar is placed horizontally across the stems of about 15 or 20 plants in a plot, at which point the vertical shaft is pushed toward the ground, causing the horizontal bar to push on the stalks. The device measures the amount of force needed to bend the stalks over.

“The Stalker simulates the effect of wind pushing against a crop. It also simulates what a lot of breeders do, using our arms to push over the plants in our plots to get a sense of how springy the plants are. But The Stalker gives us an actual number so we can quantify that.”

Also in 2021, Beattie and his group started preliminary work to evaluate a set of 20 barley lines that span an even wider diversity of traits than the set of 12 varieties. As well, they dug up some of the root systems from the plots to get a sense of how well the field root measurements align with the indoor root measurements by Feurtado’s research group. 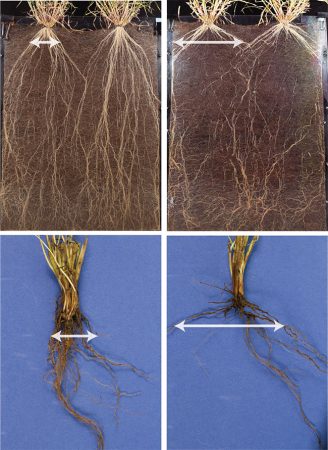 Linking root architecture and lodging
“I began to study lodging in wheat several years ago, and quickly realized that there is a large root component to lodging. This expanded into establishing methodologies to assess crop root systems and into studies assessing roots in both cereals and pulses,” Feurtado says.

“We quickly realized that there is a significant research gap in knowledge of crop root systems for Canadian crops. Root systems are key to crop production and yield but are usually only selected for indirectly from above-ground observations.”

In this barley project, Feurtado and his group are helping to fill that research gap by building a database of detailed root measurements for many barley lines. This task of measuring the observable characteristics of individual plants is referred to as phenotyping.

“There is no perfect strategy for studying roots given that they are underground in the field,” Feurtado notes. “So, we use a set of complementary root phenotyping approaches in indoor controlled environments so we can visualize and quantitate the root traits to the highest degree of accuracy. We want to make sure the data we are capturing is robust and as field-relevant as possible.”

Most of their work relies on root imaging, either photographing or scanning the roots, and often involves hydroponics, to greater facilitate high-throughput phenotyping studies. They are using three main methods to capture root system architecture, defined as the shape and spatial arrangement of the root system.

“One is a pouch method. It gives a two-dimensional view of the [hydroponic] root system and allows us to look at and image hundreds of plants at once in a given experiment,” he says.

The project is also collaborating with Leon Kochian from the Global Institute for Food Security at the University to utilize cutting-edge three-dimensional root imaging. “The method uses a tower with levels built of fishing line in a mesh pattern as a way to support the root system in hydroponics. As the roots grow down through the levels of mesh, the root architecture is maintained in three dimensions, allowing for better modeling of roots and more sophisticated image analyses.”

The third is a rhizobox method. “It uses two pieces of plexiglass or acrylic about one centimetre apart. We fill the rhizoboxes with soil and grow the plants at a 45-degree angle. This causes the roots to gravitate toward the side of the plexiglass that is facing down so we can image or scan the root architecture.”

They are measuring over 30 different root traits, including traits related to the whole root system’s shape and size, like total root system volume, and traits of individual components of the root system, like root diameter.

So far, Feurtado’s group has characterized the root systems of the 12 barley varieties, and now they working on the more diverse panel of 20 barley lines. And more recently, they have started work to characterize a set of 170 barley lines in an association mapping panel developed by Beattie. Association mapping is a way to match up an organism’s physical traits to the genetics underlying those traits. It is used to map (or associate) specific regions of the organism’s genome with phenotypic traits and is an important step for developing molecular markers for the traits. Researchers can use these markers to screen the DNA of breeding material for the desired traits, rather than having to take weeks or months to grow the seeds into plants and test the plants for those traits.

Feurtado and his group have also started the data analysis to identify which of the 30-plus root traits are the most strongly correlated with field lodging.

Promising initial results
“So far, the most interesting result is coming out of the indoor phenotyping of root system architecture traits. We have identified key root traits which are significantly correlated to field lodging resistance . . . which describe or relate to overall root system width, especially in the upper topsoil layer,” Feurtado says. “The results are very promising and in agreement with scientific literature from the U.K. and in other cereals, which associate a wider root plate with better lodging resistance.” The root plate refers to those roots around the crown that give structural rigidity to the root system in the topsoil layer.

The most promising of all these key root traits is the seminal root angle – the angle at which roots emerge from the grain during germination. Feurtado notes, “This angle really determines the overall root system architecture and root system width, and it is a highly heritable and genetically
pre-determined trait.”

Another plus is that this trait is easy to measure and uses a straightforward screening assay in germinated seedlings that takes about a week to complete. Beattie says, “It could potentially be a good tool for estimating lodging risk because you can look at the seminal roots very early on, just three to five days after the seed germinates.”

Looking ahead to multiple benefits
The results from this project could help barley breeders improve standability in both the short term and the longer term.

“One immediate benefit is that, as a breeder, I might see that Line A, B and C seem to have some really nice wide root systems, so I would then make some crosses with those lines to try to incorporate that characteristic into future varieties,” Beattie says.

“There is the possibility that we can develop a faster, simpler tool to estimate lodging potential that doesn’t depend on the environmental conditions in a given growing year. That would be a real benefit to breeders.”

Another intriguing longer-term possibility is that the database of barley root system characteristics could be used in future research to improve other root traits for better barley variety performance. “One of the surprises for me in this research is the amazing amount of variation that we see throughout the barley germplasm we have looked at to date,” Feurtado notes. “It makes me excited about the possibilities to select for and better optimize Canadian barley roots for nutrient and water uptake and to breed for greater stress resilience.”