Developing strategies to reduce the risk of this major constraint on oat yields. 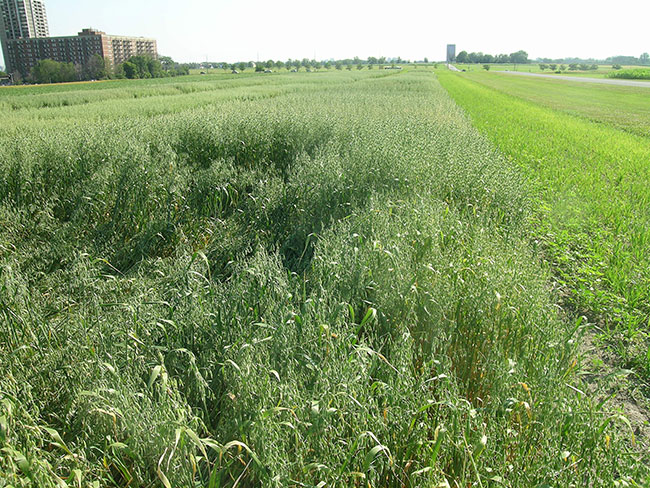 In one study, Ma evaluated the effects of different nitrogen rates on lodging and yields of different oat varieties grown at three sites. Photos courtesy of Bao-luo Ma.

“Lodging is a very serious problem for oat, more serious than for any other cereal,” says Bao-Luo Ma, a research scientist with Agriculture and Agri-Food Canada (AAFC) in Ottawa. His recent research on oat agronomy and crop physiology has produced valuable findings to help in the battle against oat lodging.

“Lodging is an important factor limiting yield potential and reducing a farmer’s profitability. Depending on the timing and severity of lodging, it can reduce oat yields by 10 to 40 per cent. In extreme cases, yield losses can be as much as 80 per cent. Lodging can have a negative impact on grain quality, possibly leading to grain contamination with mycotoxins. Lodging also makes harvesting difficult and can add an additional cost on grain drying.”

Through their studies, Ma and his research team have identified some key traits for oat breeders to target for improved lodging resistance, and have underlined the importance of developing region-specific best management practices to reduce the risk of lodging.

Nutrients, climate and lodging
Since lodging risk tends to increase with higher nitrogen levels, lodging and nitrogen rates are closely tied considerations as growers try to maximize their oat yields. So, Ma and his team examined the effect of nitrogen fertilizer rates on lodging and yields in various oat varieties in different environments, looking for possible breeding criteria and management strategies that could reduce lodging.

“Genetic differences in lodging resistance and yield potential are well known. However, our understanding of the mechanisms of differential response of oat cultivars to nitrogen fertilization is still limited,” he explains.

In general, they found that grain yields tended to increase as the nitrogen fertilizer rate increased, but yields levelled off when the fertilizer rate reached 100 kg/h. The oat varieties had a site-specific response to nitrogen: the yield for each cultivar differed significantly from site to site. The highest yields were in Melfort and the lowest in Normandin, regardless of the cultivar.

Lodging resistance of the oat cultivars was also site-specific. Severe lodging occurred only at Ottawa.

“We found that crop lodging was the key trait that limits the yield response of oat cultivars to nitrogen applications. We also found that cultivar responses are site-specific,” Ma says. “Therefore, best management strategies should be developed to address regional requirements.”

The expected association between higher nitrogen supplies, taller varieties and a higher risk of lodging was found at the Ottawa test site. However, when you compare the data for the three sites, Melfort actually had the highest nitrogen supply (due to its higher soil residual nitrate levels) and the tallest oat plants, but only mild lodging problems.

Site-specific factors that influence the risk of lodging include things like weather, soil type and disease. Ma gives an example of how temperature plays a key role in lodging. “Under cooler conditions, the soil microbes are not as active, so the breakdown of organic matter and the release of nutrients from the organic matter will be slower. Also, under lower temperatures, the plant will develop slower, so the enlargement of cell size will be slower and internode growth will be slower.”

So, if an oat plant’s early growth takes place under cooler conditions, then the lower part of the stem will have shorter internodes and thicker cell walls, resulting in a stronger stem that is less likely to buckle in stormy weather. Conversely, warmer growing conditions will lead to taller stems with thinner cell walls that are more likely to buckle. During the study, temperatures were warmest at the Ottawa site, increasing the lodging risk there.

The study’s results also showed that higher levels of nitrogen and phosphorus in the oat straw were both associated with a greater risk of lodging. The connection between higher straw nitrogen levels and lodging was expected, but the connection with higher straw phosphorus levels was a surprise.

Ma says, “Our study indicates that site-specific nitrogen application rates and appropriate cultivars could be recommended for increasing oat yield and reducing the risk of crop lodging.”

Lodging is a more serious problem for oats than for any other cereal. Photos COURTESY OF Bao-Luo Ma.

Plant architecture and lodging
In another study, Wei Wu, a post-doctoral researcher from China, and Ma’s team investigated the effects of plant architecture on lodging and yield performance. They compared four oat varieties, all with similar yield potentials, but two had erect leaves and two had droopy (prostrate) leaves. They grew these varieties under three different plant populations, from 200 to 600 plants per square metre.

“Increasing the seeding density is the easiest way to increase the aboveground biomass and oat yield, but it often leads to a high risk of crop lodging,” Ma explains.

He notes, “While there is no doubt that both leaf architecture and root system structure significantly influence oat crop yields, it is unclear how these traits can also affect crop lodging, especially under growing conditions that favour lodging, such as a high nutrient supply, high plant populations, favourable weather and so on.”

The researchers determined that leaf architecture has an important effect on lodging. “We found that erect leaf posture could promote crop resistance to lodging in oat production. Therefore, varieties with an erect leaf posture can be grown under higher population densities to achieve their yield potential,” Ma says. “Prostrate leaf varieties, however, should be grown under intermediate densities to prevent lodging.”

He explains, “An erect leaf posture could lead to lower competition between individual plants, allowing higher light transmittance through the lower canopy, even under high plant populations, which will improve lodging resistance. In comparison, a prostrate leaf posture will lead to lower light transmittance, and the non-uniform distribution of the leaves within the canopy could further deteriorate the canopy structure that is exacerbated by dense planting.”

He summarizes, “Our results suggest that oat breeders and growers could breed or select for cultivars with erect leaves and rigid root systems for lodging-prone environments to reduce the risk of crop lodging and achieve the genetic yield potentials, especially under high plant population conditions.”

Another aspect is that oat straw has more value for livestock rations – it is more palatable and nutritious than barley or wheat straw. So, research to develop shorter or semi-dwarf oat varieties may not be a priority for producers, even though such varieties would be more resistant to lodging.

However, Ma says there is good potential to increase lodging resistance in oats through breeding and agronomic research.

“There are large variations among oat genotypes and their plasticity in their response to management-by-environment interactions. I think that along with studies to determine the appropriate amount of nitrogen fertilizer in a specific environment, research is also needed on the soil supplying power of other macro- and micronutrients,” he says.

“Often other under-investigated nutrients and/or agronomic measures may play decisive roles in yield formation and lodging resistance. In particular, we wish to expand our research toward the understanding of micronutrient dynamics in the soil, interaction with macronutrients, and their roles in the response of crop plants to biotic and abiotic stresses.”

Ma concludes, “As we work to increase oat yields, we also increase the risk of crop lodging. The strategies I’ve mentioned – like site-specific nutrient management recommendations and breeding for erect leaf posture – could be effectively implemented to reduce crop lodging. But lodging can never be completely eliminated under favourable weather and high-yielding conditions. Our battle against crop lodging will continue.”


Related
Reducing lodging and getting the most out of your ‘big’ wheat
OMAFRA: Managing oats for maximum yield potential and profitability
Better barley for Ontario
Copper’s role in ergot formation and crop lodging