The area seeded to barley in Ontario has been trending downwards over the past two decades, from 325,000 acres in 1998 to only 85,000 acres in 2017. That decline has happened despite the upsurge in the province’s craft brewing industry, which prefers locally grown ingredients. So, in a three-year project, University of Guelph researchers are using several strategies to develop improved malting and feed cultivars suited to the needs of producers in Ontario. 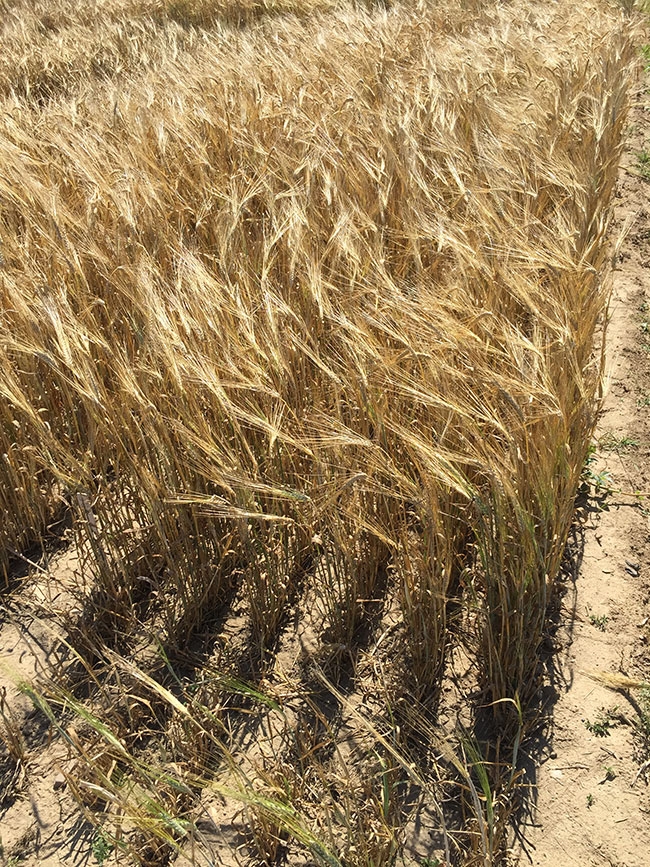 University of Guelph researchers are evaluating a wide range of malting barley cultivars from other regions to see which ones perform well in Ontario. The area seeded to barley in Ontario has been trending downwards over the past two decades

Lewis Lukens and Alireza Navabi, who are both professors in the department of plant agriculture, are leading this project. In the project’s feed barley component, they are looking for higher yields as well as other positive characteristics, especially stay-green. In the malting barley component, the must-have traits are higher yields and lower susceptibility to Fusarium head blight (FHB).

FHB is one of the biggest challenges for barley growers in Ontario because the relatively moist climate favours this fungal disease. Along with reducing yields and grades, FHB produces toxins that limit the end uses of the grain for feed, food and malting.

Novel genetic variation in feed barley
“On the feed side of our project, we are primarily using a mutagenesis approach. This involves taking an existing barley variety and using a chemical mutagen [ethyl methanesulfonate] to induce novel genetic variation, and then selecting from that group,” Lukens explains. “This approach has an important advantage. We are starting with a variety that grows well in Ontario and, instead of crossing it with something that is unrelated and having offspring from that cross that are quite variable, using mutagenesis generates a population that will do well in Ontario and that will have fewer traits that are negative.”

The variety they used was Dignity, a high-yielding, six-row feed barley with lodging resistance, medium height and good kernel weight. “The higher the dose of the mutagen, the larger the genetic changes that will occur,” Lukens notes. “We tested different amounts of the chemical mutagen to get what we think is the correct dose.”

The research team carried out the mutagenesis treatment in 2016. “We now have on the order of 4,000 different lineages. These distinct lines arose from a single line that was mutagenized,” Lukens says. “For each one of these lines, we self-pollinate it and make it genetically uniform. Then we obtain a large number of seeds from the line and plant it in the field to be assayed.”

The team will plant the lines in field plots at the university’s research station in Elora, Ont.

Many valuable traits could emerge in the field evaluations. Lukens says, “One trait that we will target first is called stay-green. Usually after seed is set, plants senesce and their leaves turn yellow. But in corn, stay-green has been introduced. This is when the leaves continue to conduct photosynthesis after pollination has occurred and the seed is developing, so the leaves continue to provide carbohydrates to the grain. Corn yields have increased significantly because of this stay-green trait. Our hope is to introduce it into barley.” From studies of stay-green in corn, the researchers know it is a heritable trait associated with better tolerance for water and heat stress, along with higher yields.

Although FHB resistance is not a direct target of the project’s feed barley component, the research team hopes to survey the plots for disease resistance and other useful traits.

University of Guelph researchers are evaluating a wide range of malting barley cultivars from other regions to see which ones perform well in Ontario.

Malting barley variety testing
The malting barley part of the project involves two-row varieties. Two-row barleys tend to have better malting quality and lower susceptibility to FHB, but they may be somewhat lower yielding than six-row barleys.

The research team is testing 230 malting varieties at the Elora research site. Lukens says the varieties being tested have been obtained through a major barley cultivar evaluation program, co-ordinated by the University of Minnesota and taking place at about a dozen locations in North America.

The team is also accessing germplasm from other barley growing regions in Canada and evaluating the performance of those lines across different locations in Ontario. The researchers will be evaluating the malting varieties for a range of traits, such as resistance to FHB and other diseases, resistance to insect pests like cereal leaf beetle, plant growth, days to maturity, lodging resistance and grain yield.

The varieties with the best performance in terms of both agronomics and malting quality may be entered into the official Ontario barley registration trials and/or used for crossing with other barley lines to develop even better varieties.

Lukens notes, “Growers get a significant revenue gain for malting barley compared to feed barley. Also, having more malting varieties for Ontario would be beneficial to the craft brewing industry. These breweries want to source locally grown varieties and source varieties that [give a distinctive character to their beer].”

Funding for this project is from Grain Farmers of Ontario, SeCan, Cribit Seeds, Wintermar Farms and Growing Forward 2, a federal-provincial-territorial initiative. The Agricultural Adaptation Council assists in the delivery of Growing Forward 2 in Ontario.