If you can’t measure something you can’t improve it. Since plant breeders want to develop improved crop varieties with bigger, healthier root systems to ensure the plants are well anchored in the soil and can take up plenty of water and nutrients, and agronomic researchers want to know whether different management practices improve crop root systems, they need to be able to measure the roots. 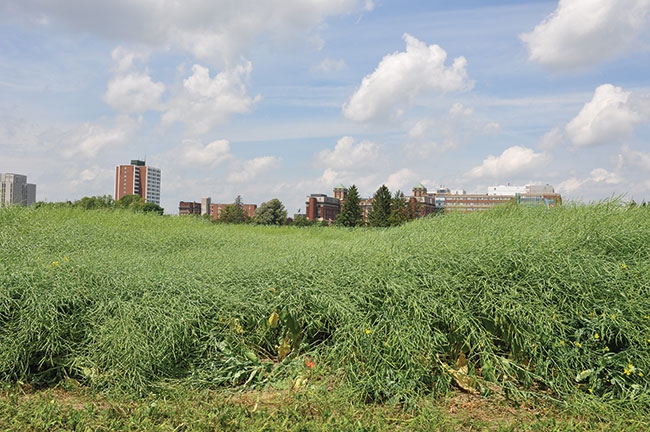 Researchers are evaluating ways to reduce lodging If you can’t measure something you can’t improve it.

The conventional way to do that is to dig up the plants, carefully wash the roots to remove all the soil without removing too many fine root hairs, then measure characteristics like root length, volume, surface area and weight – a time-consuming process.

Bao-luo Ma, a research scientist with Agriculture and Agri-Food Canada (AAFC), has been working on a number of studies involving root and stem measurements. Through these studies, Ma and his post-doctoral fellow, Wei Wu (from Northwest A & F University in China), have developed a much faster, easier way to measure root systems. They are using this method (and others) to compare different cultivars and to evaluate the effects of different agronomic practices on crops.

Canola lodging and management
Ma and Wu began this research with a study on lodging in canola. Ma says, “Lodging is a common problem for most field crops, but we don’t have a conventional way to quantify the difference in susceptibility to lodging between different varieties, and we don’t know what traits are associated with lodging problems.”

Cultivars are often evaluated for susceptibility to lodging based on observations of actual lodging in the field. However, that approach isn’t always effective because the weather conditions that favour lodging don’t always occur when and where a researcher would like them to occur.

Plant breeders need to know which type of lodging is causing problems to target their future breeding work, so Ma and Wu used various measures to assess the ability of three canola varieties to tolerate root lodging and stem lodging. The field trials were conducted in Ottawa in 2015 with funding from AAFC and the Canola Council of Canada under Growing Forward 2.

One measure Ma and Wu used was a three-point bending test that simulates stem lodging. This test determines the strength of a force pushing on a stem and how much force the stem can tolerate before it cracks. Another measure involved a similar method that simulates root lodging to see how much force is needed to push over a plant.

They also measured a range of lodging-related traits such as plant height, stem diameter and centres of gravity of the stem and plant. As well, they washed the roots and measured root morphology characteristics, such as root length, area and volume. Based on several of these measurements, they calculated the susceptibility of the plants to root lodging and to stem lodging.

In addition, they measured an electrical signal called root capacitance; previous research indicated such electrical measurements could be used to estimate root characteristics. Ma and Wu measured root capacitance right in the field, using a small meter with two electrodes. One electrode is attached to a needle that is inserted into the plant’s stem near the soil surface. The other electrode is placed in the surrounding soil. Each root capacitance measurement can be done in a few seconds, so it’s much faster than washing and measuring the roots.

The researchers examined how different agronomic practices, like planting date and nitrogen fertilizer applications, were related to the various stem and root measurements, including root capacitance, in each of the three canola varieties.

Their fertilizer trials compared single preplant applications and a split application. With the single preplant applications, increasing the nitrogen rates from zero to 200 kilograms per hectare (kg/ha) significantly increased the seed yield. Unfortunately, that also increased the risk of stem and root lodging. Even though the higher nitrogen levels somewhat increased root and stem strength, the higher seed yield made the plants more top-heavy and therefore more likely to fall over. In contrast, the split nitrogen application (50 kg/ha preplant and 150 kg/ha side-dressed at the rosette stage) increased the plant’s ability to resist lodging compared to 200 kg/ha preplant.

The study results also showed the canola plants were more susceptible to root lodging than stem lodging. That finding suggests root lodging resistance would be an important criterion for canola breeding programs.

Root capacitance had a strong positive relationship with root anchorage strength and with measures like root length, volume and area that are related to a plant’s ability to remain anchored in the soil. These findings suggest root capacitance could be an easy, inexpensive way to evaluate root lodging resistance in different canola breeding lines and to evaluate the effects of different agronomic practices on lodging.

“This study was the first to determine the feasibility of conducting electrical measurements in the field as a relatively quick way to indirectly assess root anchorage strength in canola,” Ma says.

Wheat lodging and nitrogen management
In 2016, Wu and Ma conducted a preliminary field experiment in Ottawa looking at lodging in wheat, with funding from AAFC. They wanted to evaluate how nitrogen fertilizer timing and rates affected wheat yield and lodging risk, and to identify whether stem or root lodging was more common in wheat.

“Optimizing nitrogen timing and rates is critical for controlling lodging and for ensuring optimum wheat yields and grain quality,” Ma says. “If you apply insufficient nitrogen, then you’ll reduce grain protein and yield potential. But if you apply a lot of nitrogen at planting, then it will cause lodging if the environmental conditions are right.”

The researchers determined root lodging was more prevalent than stem lodging in wheat. “The results suggest that root lodging should be targeted as the priority in wheat breeding to increase lodging resistance,” Ma says.

Ma is hoping to do more detailed work on the effects of split nitrogen applications on lodging and yield in wheat because of the potential for such applications to improve the efficiency of nitrogen fertilizer management and the need to increase grain protein in high-yielding wheat varieties.

In this controlled environment study in Ottawa, the treatments included a normal temperature regime (23 C in the day, 17 C at night) and a high temperature regime (27 C in the day and 24 C at night), combined with three soil moisture levels (well-irrigated, moderate moisture stress, and severe moisture stress). The treatments involved two canola genotypes. A previous trial revealed one of the genotypes was more susceptible to heat and drought stress.

Root capacitance could be used to quantify heat- and drought-induced changes in root morphology, to screen canola lines for resistance to these stresses, and to evaluate the effects of agronomic measures for reducing drought and heat stresses. The study results also suggest root capacitance could be used for measuring the effects of other stresses, like nutrient deficiency or disease, on roots.


Related
Reducing lodging and getting the most out of your ‘big’ wheat
Accelerating drought tolerance in wheat
AWC announces $2.6 million in wheat research funding
New Mycorrhizal fungi could improve canola production