The interest and adoption of variable rate fertilizer technology (VRFT) has increased dramatically in recent years. Industry agronomists and farmers have been and will continue to be on a steady learning curve to understand when and how to best utilize this technology. Before farmers can fully understand how to adopt VRFT, they need to develop a very good understanding of the types and amounts of soil variability in their fields.

Soils across the Canadian prairies have slowly formed and developed over the past 10,000 to 12,000 years after the last glaciation. Prairie soils have formed as a result of climate, types of vegetation influenced by regional climatic conditions, types of parent geological material, topographic slope and position, and time.

A major factor that affects soil variability of fields is the type of parent geological material (PGM), which is the geologically deposited mixture of sand, silt, clay and stones. About 12,000 years ago, almost all of the Prairie region was covered by a massive glacial ice sheet about a mile thick. The parent material of many soils across the Prairies is called glacial till, which is the material left after glacial retreat. This heterogeneous material is a mixture of sand, silt, clay and stones. Soil texture (the proportions of sand, silt and clay) can be highly variable in glacial till but often is fine textured, as is the case with clay loam. The topography of glacially deposited soils ranges from gently rolling to very rolling or hummocky. Glacial till deposits are often moderately stony.

It took several thousand years for the glacial ice to melt and retreat. As massive amounts of water poured off the melting ice sheet, considerable water sorting of the sands, silts, clays and gravels occurred. Three major types of water-sorted parent materials were deposited.

Fluvial parent material was deposited by moving water. The soils are often sandy (sandy loam or loamy sand). The faster the water flows, the coarser the soil texture. Topography is often undulating to gently rolling.

Fluvial lacustrine include sediments deposited by water moving slowly across the landscape. Soil texture is often loam to clay loam. The slower the water was moving, the finer the soil texture. Topography is often undulating.

When the parent geological material in a field is fairly uniform and topography is level to undulating, soils are usually reasonably uniform. Most soils that develop on lacustrine material are not variable enough to warrant variable rate fertilizer application. Fluvial lacustrine deposited soil texture can vary from uniform to quite variable in soil texture. Therefore, fluvial lacustrine soils require careful assessment to determine the potential economic benefit of VRF application. There are times when soil texture and other characteristics can be variable and VRF application could be beneficial.

When topography is quite rolling, soil variability is primarily a result of slope position. Poorer soil moisture conditions on upper slope positions have meant less plant growth and less organic matter added to soils in upper slope versus lower slope positions over hundreds of years of soil development. Soils have been affected by greater erosion on upper slopes and deposition in lower slope positions. Sometimes soils are variable across landscape due to differences in geologic deposition. Soils may be quite sandy at one end of a field but higher in clay in another area. Sometimes the parent material may be high in sodium and Solonetzic soils have developed due to the high presences of sodium. So there are a number of factors that can cause a profound range of different types of soil variation in cultivated fields.

The development of variable rate fertilizer plans makes more sense to farmers when they understand the types and causes of soil variability on their farmland. A good place to start is to gather soil information from soil survey maps and the accompanying reports. Soil survey maps identify unique soil types or “soil series” with similar physical and chemical properties. The parent geological material for each soil series is identified. Soil survey scale is usually medium and therefore will not provide the low scale detail needed for variable rate fertilizer application. But maps and reports provide a good baseline of information. For example, in Alberta, all soil survey map information has been put online on the Alberta Agriculture website called AGRASID (Agricultural Region of Alberta Soil Inventory Database), at http://www4.agric.gov.ab.ca/agrasidviewer/. This is an excellent place to start for Alberta farmers.

Farmers can also utilize the services of industry agronomists who have a good soil science background for assistance to better understand their soils and variability. Ideally an advisor should have soil survey knowledge and experience. 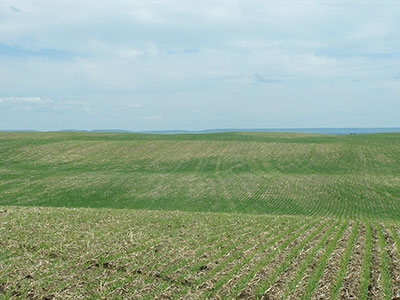