Canola emergence is influenced by a number of factors, and even with implementation of best management practices, it is often variable and in the range of 50 to 70 per cent. Researchers and industry are trying to find answers to the variability in canola emergence across Western Canada.

Dr. Bob Blackshaw with Agriculture and Agri-Food Canada (AAFC) in Lethbridge, Alta., led a three-year study to determine the critical factors and agronomic practices influencing canola emergence and stand establishment. This was a follow-up study to a previous multi-site, multi-year field study conducted by AAFC researchers that looked at the effects of variety, seeding depth and seeding speed on canola emergence. The previous study, which used a ConservaPak drill equipped with one-centimetre-wide knife openers, confirmed that deep seeding and higher seeding speeds had a negative impact on canola emergence.

“We initiated this follow-up study to determine if seeding speed was as important with other types of no-till drills, and if we could improve on the canola emergence range of 50 to 70 per cent,” explains Blackshaw. “We compared six different openers in small-plot replicated trials across different soil types in Western Canada at Lethbridge, St. Albert, Zealandia, Indian Head and Brandon in 2011 and 2012. We also conducted a complementary field-scale study utilizing farmers’ seeding equipment to compare the effect of various seeding speeds on resulting canola emergence.”

The small-plot trials, led by Blaine Metzger with the Ag-Tech Centre at Lethbridge, were completed using specialized seeding equipment and expertise. The Centre developed a seed drill that can be used with all of the different openers for the trials. “This made it easier to compare the openers and ensured our research results were not confounded by other effects such as drill weight, row spacing, seed metering system or packing system,” says Blackshaw. “We
evaluated six different openers, including low, medium and high disturbance types, with a row spacing of 12 inches and at two ground speeds, four and six miles per hour.”

“The most consistent finding from the small-plot study was travel speed, and as we increased the speed of seeding we often reduced canola emergence,” explains Blackshaw. “The results showed little difference in performance among the six openers: all openers usually performed well. Across the trials, the results showed that as seeding speed increased from four to six miles per hour, there was a 20 per cent reduction in 2011, and in 2012 a 33 per cent reduction in plant stand.”

The study also included field-scale farm trials, where farmer co-operators seeded one strip at four miles per hour and adjacent strips at higher speeds using their own seeding equipment. Researchers measured canola emergence three weeks after seeding. Over 30 farms in Alberta, Saskatchewan and Manitoba participated in 2011 and 2012 and were selected to represent soil types and drill opener types similar to the small-plot study. Researchers were interested in determining the difference in ground speed at a typical farm field scale, not the differences in the drills.

“The results from the field-scale trials showed a general trend of reduced canola plant stands with higher seeding speeds, except in Manitoba where seeding speed did not affect canola emergence at any of the sites,” says Blackshaw. “In Alberta, in several cases at higher speeds, canola stand was reduced by greater than 20 per cent and reductions in canola yield and quality would be expected. In Saskatchewan in 2012, canola emergence over all sites ranged from a low of 23 per cent to a high of 68 per cent, indicating how variable canola emergence can be at the farm level.”

Blackshaw notes that spring conditions in both 2011 and 2012 had better than normal soil moisture conditions, which may not have been the toughest test for the openers. “All of the openers performed pretty well, and we weren’t able to draw any definite conclusions from the results to say one may be better than another in different soil types,” he says. “We also recognize that growers face a tug of war between seeding a lot of acres in a short period of time and doing the best job they can in terms of seed placement and emergence. 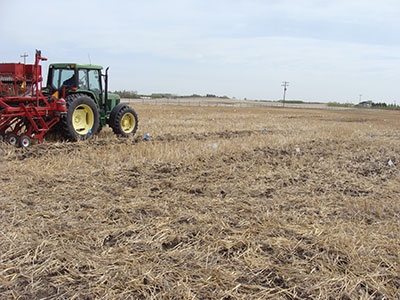 
Related
Slow emergence and seed treatments for canola
Slow down seeding: reap rewards from emergence to harvest
Optimum canola seeding dates and rates
Patchy emergence in canola could be cutworms