Fertilizer is a costly input needed to optimize crop production. Understanding how fertilizer reacts in soil is important to optimize use and efficiency to grow high yielding crops. It is also important for farmers to understand the short and long-term effects fertilizers can have on soil chemical and biological properties. 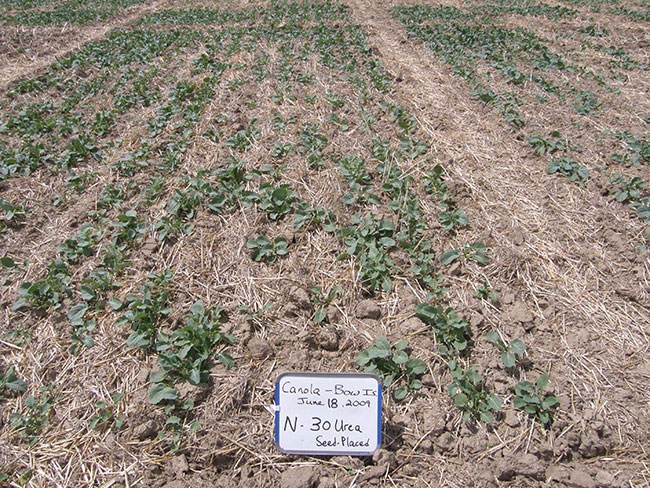 Salt and toxicity effects of fertilizers
The salt content of a fertilizer is a critical factor in placement of fertilizer in the seed row. “Salt effect” or “fertilizer burn” occurs when fertilizer is located with or near a germinating seed resulting in injury or death of the seedling. Injury is caused when the concentration of salts in the fertilizer is greater than the concentration of salts within the plant cells, resulting in higher osmotic pressure in the soil versus the seedling. This causes water to move out of the seedling cells and into the soil. Often the salt effect results in the eventual death of the plant tissue and seedling. When water moves out of plant cells, the tissue desiccates, the seedling dies and roots become blackened. The term “fertilizer burn” comes from the visual appearance of blackened seed and roots. Fertilizer types vary in their salt level or salt index (SI). Products with a lower SI value are less likely to cause salt injury. Products such as ammonium sulphate (21-0-0-24) or potassium chloride (0-0-60) have higher SI levels (20.9 and 11.5, respectively), versus mono-ammonium phosphate (11-52-0) of 5.95.

“Toxicity effect” occurs when urea (NH2)2CO granules are near a germinating seed and convert to ammonia (NH3). When soil moisture conditions are good, hydrogen (H+) ions from water will attach to ammonia to convert to ammonium (NH4+) to eliminate the toxicity effect. But when soil moisture conditions are marginal or poor, ammonia persists in the soil causing ammonia toxicity to germinating seedlings. Placing urea fertilizer with or near a seed can cause seedling injury depending on the rate of fertilizer used, sensitivity of the crop and soil moisture/temperature conditions.

To prevent toxicity, make sure seed-placed urea rates are within the safe limits for the crops grown and soil moisture conditions at the time of seeding.

The pH of surface soils seeded to annual crops across Western Canada is slowly declining due to N fertilizer application, and is accentuated with no-till cropping. This can have very negative effects on soils that are already slightly to moderately acidic. However, for basic or alkaline soils with pH higher than 7.5, reducing the soil pH can have some benefits, such as potentially increasing availability of some nutrients.

In the short term, application of ammonia-based fertilizers, including urea, anhydrous ammonia, and UAN can actually cause soil pH to increase temporarily up to a pH of 8.5 to 9.0. This occurs when NH3 combines with and removes H+ ions out of the soil solution to form NH4+. By removing the H+ ions from soil solution, the soil pH increases at the point of fertilizer application. This reaction occurs quickly. For example, with anhydrous ammonium, it occurs in just a few hours. But the pH change is short lived, as the NH4+ is converted by soil microbes to NO3-, then more H+ ions are released back into soil solution causing the soil pH to decline. The long-term decline in soil pH is a serious concern for farmers.

Potential volatilization of NH3 becomes a concern when soil pH increases after surface application of urea. As soil pH temporarily increases, this promotes the formation of NH3 gas on the soil surface, leading to increased NH3 volatilization. Research has shown volatilization is potentially greater on sandy soils and least on fine textured clay soils.

Fertilizer solubility
Fertilizers have different levels of solubility. Solubility is a measure of how much fertilizer material will dissolve in water. This is an important property that strongly affects the availability of fertilizer nutrients to a crop. It can influence the best time and placement of a fertilizer nutrient for optimum efficiency. Fertilizers that are more soluble will dissolve easily in soil water making nutrients more available for plant uptake. Fertilizers with low solubility will not easily dissolve in water and are less available for plants.

Most of the nitrogen, potassium (K), and sulphate-sulphur (SO4-S) fertilizers sold in Western Canada are quite water-soluble. Some prairie farmers in the past have used rock phosphate, which has extremely low water solubility – usually less than one per cent and has very poor availability to plants.

Mono-ammonium phosphate fertilizer (11-52-0) has reasonably good water solubility to meet crop requirements. Dissolved phosphate can react with calcium (Ca) or magnesium (Mg) in soil to reduce solubility and availability to crops. It is only a concern in soils with high pH and high free lime. When this process occurs, it is called fertilizer fixation.

When purchasing a new or unconventional fertilizer product, check that the product has high solubility to ensure adequate plant availability.

Anhydrous ammonia reactions in soil
Anhydrous ammonia (AA) nitrogen fertilizer is a liquid stored under pressure and is a gas under normal atmospheric conditions. When AA is injected into the soil, the liquid N expands into a gas and reacts with soil moisture. At the point of injection, a zone or band of NH3 gas is created. The diameter of this band is affected by the soil texture, soil water content and soil temperature. Anhydrous ammonia has a very high affinity for water. After AA is injected into soil, it reacts with hydrogen (H+) ions from water (H20), to change from NH3 to NH4+. The diameter of the NH3 reaction zone is narrower in moist soils versus dry soils, due to the amount moisture available to react with the NH3.

Anhydrous ammonia is a toxic gas and will temporarily sterilize soil microorganism populations in the zone of injection. This effect only lasts for a few days and soil microbe levels are often higher within a week after AA injection.

A 10-year anhydrous ammonia and urea study by Agriculture and Agri-Food Canada (AAFC) at Scott, Sask., found that AA applied according to soil test recommendations had minimal long-term detrimental consequences for soil microbes, soil biochemical properties or soil structure. They did note that high rates of anhydrous ammonia or urea had long-term effects on soil pH.

To minimize NH3 volatilization immediately after AA injection, it is best to band into moderately moist, cool soils. To avoid loss of NH3 gas, ensure that moist soil flows around the banding knives to completely close in the furrow behind the knife, to seal the furrow to prevent gaseous N loss.

Urea reactions in soil
Urea nitrogen fertilizer is the most commonly used N fertilizer in Western Canada. Urea reaction in soil can begin to occur as soon as it is applied, if the soil is warm and moist. Soil has a naturally occurring enzyme called urease. This enzyme is required to initiate the breakdown process of urea to convert it into ammonia and carbon dioxide (CO2). The simple chemical reaction is: CO (NH2)2 (urea) + H2O + urease → 2NH3 +CO2

Normally, NH3 will quickly convert to NH4+ in a moist envrionment. Then, specific soil microbes convert the NH4+ to NO3- for plant uptake. When urea is placed in a warm, moist soil, conversion to nitrate usually takes at least two to three weeks, depending on environmental conditions. If urea is banded eight centimetres (cm) deep in soil or if it is well incorporated, there is minimal NH3 loss. However, if broadcast onto the soil surface, significant NH3 gaseous loss can occur, particularly if the soil is warm and moist. Ammonia loss from surface broadcast urea increases with increasing soil and air temperature. The urea enzyme that initiates the urea conversion, must be active in the soil.

Recent western Canadian research has shown significant NH3 loss if urea is shallow banded or seed placed less than five cm deep. This is a concern for shallow seeded crops when urea is seed-placed or side-banded at a shallow depth.

Urease enzyme activity is influenced by urease concentration in soil, soil temperature, soil moisture, and soil pH. The urease enzyme also occurs naturally in plant residue. Generally, there is more urease present in soil when there is more crop residue on the soil surface than if the soil is bare. Farmers that use no-till cropping systems usually have higher soil urease activity than conventionally tilled soil.