Blackleg disease, caused by the pathogen Leptosphaeria maculans, continues to be of major concern to the canola industry in Western Canada. For many years, the disease was reasonably well controlled with blackleg-resistant varieties and the general management practice of three- or four-year crop rotations. However in recent years, in particular in 2012, blackleg was reported as a serious problem in some areas in Western Canada.

“Over the past few years, we have been seeing some changes that are generally raising concerns over blackleg disease and management,” says Dr. Gary Peng, research scientist with Agriculture and Agri-Food Canada (AAFC) in Saskatoon, Sask. “There is an increasing trend to shorter crop rotations with canola. There have also been more reports of increases in blackleg damage, including fields with resistant cultivars/lines.”

In the last few years there have been higher amounts of the disease and damage reported in southern Manitoba and northeastern Alberta, with some reports in adjacent areas in southeastern and northwestern Saskatchewan. Researchers have been trying to find answers to questions about the changes, and several research projects are underway both to assess pathogen populations and management practices and to determine the specific type of resistance genes being used in the fields.

“We are starting to see much more diversity in the type of blackleg isolates in canola fields, which is going to have an impact on the cultivars/lines depending on the type of resistance they carry,” explains Dr. Dilantha Fernando, professor of plant pathology at the University of Manitoba in Winnipeg. “In collaboration with Gary Peng, we have recently completed a research project to characterize the specific resistance genes in around 100 cultivars/lines. The results show that about 65 per cent of our cultivars/lines carry a single resistance gene, the Rlm3 gene.” For the project, the varieties were blind coded so researchers don’t have specifics on individual cultivars/lines.

Canola breeders can use both quantitative or adult plant resistance and qualitative or race-specific resistance to develop blackleg resistant varieties. Quantitative resistance is largely due to many genes, each with a relatively small effect. Qualitative resistance is usually effective at the site of initial infection on the cotyledons and leaves, and is controlled by race-specific resistance genes.  For the latter scenario, resistance results only if both the avirulence (Avr) gene of the pathogen and the corresponding resistance (R) gene in the host are present; otherwise, a susceptible reaction results and disease symptoms are observed.

Fernando is collaborating with Peng and with Ralph Lange of Alberta Innovates to spearhead a new five-year project funded under Growing Forward 2 to investigate the changes in blackleg populations and breakdown of resistance of canola cultivars/lines in grower fields. “Our goal is to have 25 growers or more from each province participate in the project to help us understand different management practices and the impact on blackleg pathogens and resistance in canola,” says Fernando. “We will be collecting information about crop sequence, crop inputs and other practices. This information will help us understand what interactions and effects are playing a role in the maintenance/breakdown of resistance.” Participating growers will receive information for their operation, and the final project results will be presented as a whole across all regions.

“We will also be expanding some of the initial pathogen race typing research we are currently doing in 15 sites scattered across the Prairies under this new five-year project,” adds Peng. “We will be looking at the pathogen population structure and trying to identify what the race composition is in different areas. This is very challenging work across a large geographic area, and we have a limited ability for analyzing pathogen isolates. Part of the monitoring includes trap crops of Westar canola, which has no known resistance. We will also be assembling pathogen populations from severely diseased fields and determining what variety and management practices were used to try and understand why that variety didn’t work in that specific year/field. At the end, we may be able to develop general pathogen race descriptions for certain regions and better knowledge of what is causing the breakdown of resistance.”

Industry continues to have discussions about whether or not the Australian model of labelling cultivars/lines with resistance genes and providing growers with rotation options might be applicable in Canada. Fernando has looked at some of the successes in Australia and thinks this model might be a good option to consider down the road. Peng adds that it is important to recognize some of the production differences and types of resistance used in the fields between the two countries.

“In Australia, they don’t find the quantitative or adult resistance to be as effective because pathogens are more virulent and they have a much longer growing season with much more stressful conditions towards the end of the season,” says Peng. “In Western Canada, we have a shorter growing season which may allow the quantitative resistance to be more effective here. Several companies in Canada say their cultivars/lines rely heavily on quantitative resistance. We are not seeing widespread damage on these cultivars/lines yet, even though there are some isolated diseased fields. Hopefully, with our research we will be able to understand the level of risk of this emerging issue and provide more information for discussion and solutions to reduce the risk of a potentially serious problem. Over the next few years we expect to generate some useful information to guide growers in their management strategies for blackleg disease.”

For now, growers who have had blackleg as a major problem in the field should consider recommended rotations to reduce the inoculum in the field. “Although the best strategy is a four-year rotation, a three-year rotation can still provide time for residuals and the pathogen to break down,” says Fernando. “Without more information about resistance in the various cultivars/lines, there is little point rotating resistant cultivars/lines. There may be different combinations of resistance in various cultivars/lines and there are some cultivars/lines that don’t rely on Rml3 resistance, but no one really knows for certain.” He adds that in rare cases, fungicide applications may be an option, but they are costly, and blanket applications are not the answer.

Industry, researchers and growers continue to collaborate on best management practices and strategies to reduce the risk of blackleg resistance breakdown. Fernando, Peng and their colleagues hope to provide more information as these research projects are implemented and completed.

“Although all of the projects are focusing on different aspects, the results are all feeding into the ultimate goal of improving blackleg resistance management in canola through proper approaches in the field, in the lab and every aspect that we can do something about,” says Fernando. 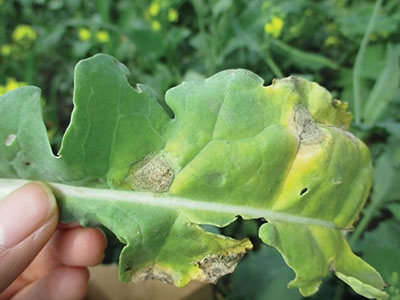