Organic matter (OM) in soil is the result of hundreds to several thousand years of microbial, plant and animal residue additions to the soil. Soil organic residues are constantly breaking down and are in various stages of decomposition. 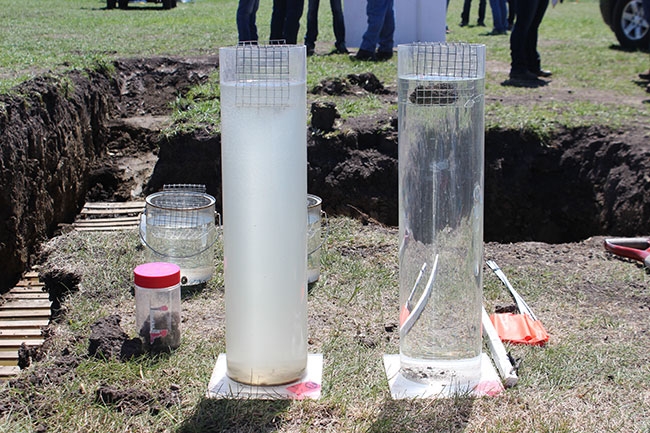 The column of water on the right has a suspended lump of soil from grassland and the column on the left has a lump of soil from the adjacent cultivated field. The soil from the cultivated field disintegrated rapidly while the lump from grassland soil remained intact three hours later. This simple demonstration shows the benefit of no tillage and increased soil organic matter to bind soil particles into good soil structure. Organic matter (OM) in soil is the result of hundreds to several thousand years of microbial

After years of soil formation and development, the OM level in soil reaches a steady state or equilibrium. The amounts and types of OM in a soil are strongly influenced by climatic factors, which, in turn, are dictated by the native vegetation growth that contributed to OM additions to soil. Landscape and geographic location also plays an important role in soil formation and OM additions to soil on upper, mid and lower slope positions.

Organic matter plays many important roles in soil and has many positive effects on soil properties (both physical and chemical).

Much of the OM in soil exists as humus. This is the dark matter formed by soil microbes after the breakdown of plant residues and is chemically complex. Humus adheres to clay particles to bind soil minerals into a good granular structure. Humus is very stable and decays very slowly over hundreds of years. This is the material that gives soil its brown or black colour; the colour of the soil depends on the amount of humus in it. Soil OM is also made up of living biomass, which includes plant roots and soil microbes. This is the living part of soil. Soil microbes cycle and release carbon (C) and nutrients back to the soil for re-use by plants.

Some soil testing labs determine soil organic C content to calculate an estimated percentage of soil organic matter. Soil OM plays a major role in the global carbon cycle and is a major sink and source of carbon.

Tillage and cropping system effects on soil organic matter
After Prairie soils were broken and developed for cultivated agriculture until the 1960s, the crop-fallow rotation system was widely used. Summerfallow was utilized to store valuable soil moisture and control weeds. But, over time, it was recognized that summerfallow in a crop rotation had very negative effects that caused soil quality and soil organic matter to slowly decline.

Using a crop-fallow rotation resulted in the decline of soil carbon by up to 50 per cent in Prairie soils over 50 to 100 years (Figure 1). The plant residue, active and slow carbon fractions were most affected, but the passive fraction (very stable organic matter) was relatively unaffected by cultivation. Soil organic nitrogen level declined by up to 60 per cent. This widely used cropping system relied on mineralization of nutrients stored in OM for crop nutrition. Summerfallow coupled with tillage also exposed soil to erosion by tillage, water and wind. Some of the worst wind erosion events on the Prairies occurred in the 1930s, when the crop-fallow system was commonly used. The crop-fallow system had very negative effects on soil quality after Prairie grasslands were broken and developed for annual crop production. 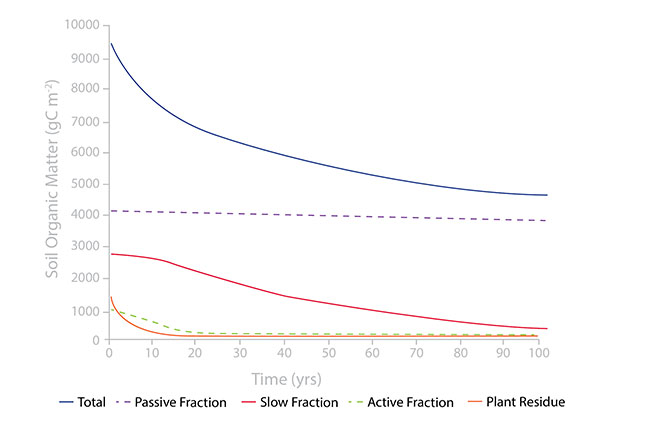 Figure 1. Effect of using a crop-fallow rotation on soil organic matter fractions over 100 years in a Prairie soil.

Fortunately, in the past 20 to 30 years, many Prairie farmers have shifted to continuous cropping, more diverse crop rotations, direct seeding of crops and have started using adequate rates of fertilization. The interaction of these practices has been very positive, starting the process of increasing soil organic matter levels, which, in turn, is improving soil quality. This soil conservation system has had many benefits and the negative effects of summerfallow on OM levels are eliminated.

Direct seeding ensures tillage is greatly reduced or eliminated to maintain a protective cover of residues from previous crops on the soil surface. This greatly reduces water and wind erosion and conserves more soil moisture for future crops. Most important is the fact that plant residues are added to the soil every year and the rate of decay of organic materials is much slower with the elimination of summerfallow. By cropping the land every year, organic residues are produced every year to maintain and hopefully increase soil OM levels compared to the old wheat-fallow system. Applying optimum rates of fertilizers ensures optimum crop yields and provides increased crop residue return to soil. Returning more residues to the soil can increase OM content. Eventually, well-managed soils will reach a new soil organic matter equilibrium or steady state level.

Figure 2 shows the change in soil organic carbon in a long-term crop rotation study in the Brown soil zone near Bow Island, Alta., after 24 years. I initiated the study in 1992 and ran the trials until 2013, when I retired. Plots seeded to permanent grass had the greatest increase in soil organic carbon, followed by continuous wheat treatments. The increases in organic carbon were modest but significant. Much of the added OM in the soil is referred to as light fraction OM that mineralizes at moderate rates to release plant available nitrogen (N), phosphorus (P), sulphur (S) and other nutrients for the growing crops. 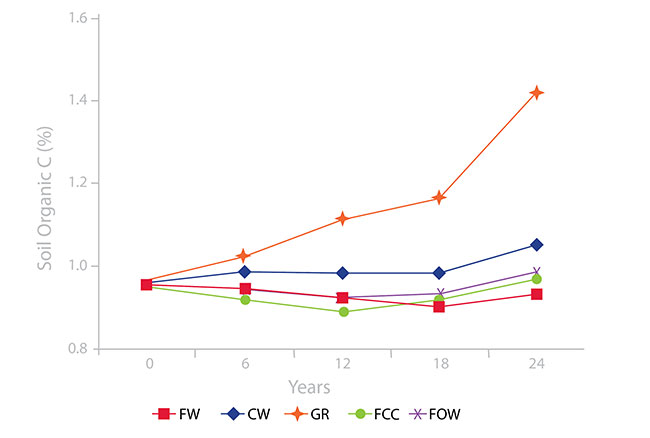 Benefits of increasing soil organic matter
There are many benefits to increasing soil OM. Organic matter improves soil’s physical structure by acting like a glue to bind soil mineral particles together into a good granular or crumb structure. This increases water infiltration rates, making it easier for water to penetrate into soil and, in turn, increase the amount of soil water stored for future crop growth. The improved granular structure makes soil more resistant to wind and water erosion (see photo on page 22). Soil organic matter acts a bit like a sponge to increase soil water holding capacity.

In recent years, soil organic matter’s ability to absorb potential pollutants or toxins such as pesticides has been recognized. Soil organic matter provides a place where toxins are temporarily adsorbed and stored until micro-organisms can gradually degrade these materials over time.

Most important, soil organic matter serves as an excellent storehouse of slow-release nutrients to increase the fertility of the soil. Depending on the level of soil organic matter, and soil moisture and temperature during the growing season, soils can mineralize and release up to 80 pounds of N per acre during the growing season. Significant amounts of P and S can also be mineralized and contribute to crop nutrition.