Features Agronomy Soybeans
Till or no-till after soybeans? 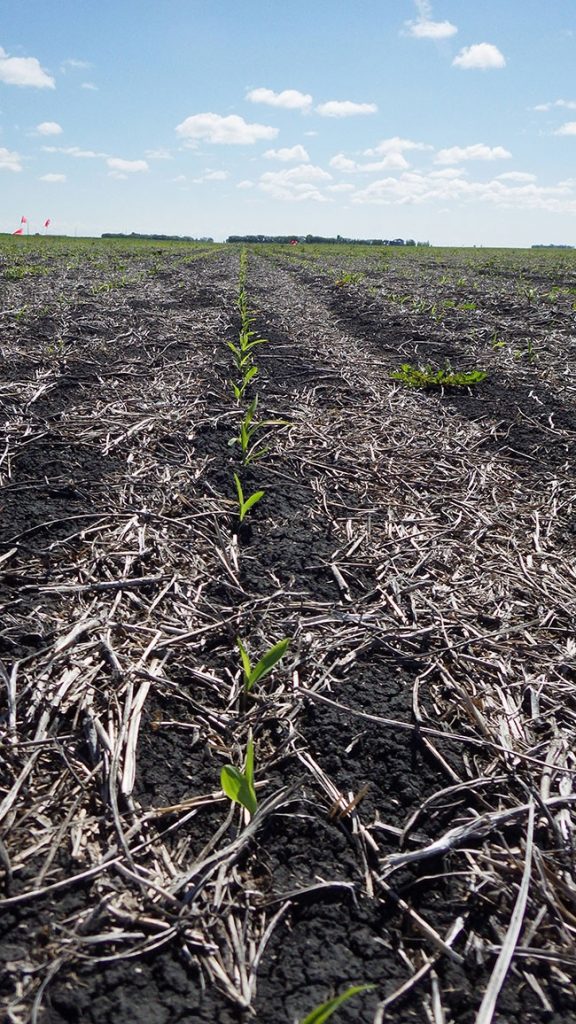 “He was surprised to find how much tillage was being done after soybeans in Manitoba, having worked in other regions where soybeans are grown, and zero-tillage and direct-seeding into soybean residue is common,” Lawley says.

Soybeans are typically considered a low-residue crop; unlike wheat, soybeans must be cut close to the ground.

Intrigued, Lawley started a four-year study in 2014, funded by Manitoba Pulse and Soybean Growers Association and Western Grains Research Foundation, to find out whether or not the practice of tilling to manage residue after soybeans was supported by research. Lawley set the experiment up as an on-farm trial on five commercial soybean fields on farms near Boissevain, Winkler, Homewood, Linden and New Bothwell. The farms had varying soil types ranging from loam to clay.

At that time, she says, soybean acres were expanding rapidly in the Red River Valley, where conventional tillage with double-discs and cultivators is still commonly practiced. Producers typically use tillage after soybeans to resolve soil structure issues such as compaction or rutting, to improve water infiltration or to ensure soybean residue doesn’t cause problems with seeders the following spring.

During the period of the study, Lawley says, there was rapid expansion of soybean acres and adoption of vertical tillage equipment. Initially, producers were reluctant to get on board with Lawley’s experiment, but by 2017, open winters and widespread soil erosion issues had brought the issue full circle, she says. “Now there’s a lot more interest in this.”

Study design
In the first two years of the study, Lawley compared four tillage approaches: standard tillage with a disc or cultivator; a low-disturbance vertical tillage treatment that left more residue; a high-disturbance vertical tillage treatment that achieves similar results to tillage with a cultivator; and direct seeding with no tillage. In the final year of the study, the farmer’s standard tillage practice was compared to a direct seeded approach.

Lawley says the high-disturbance vertical tillage treatment is representative of how producers tend to use vertical tillage in the Red River Valley – as a high-speed disc, in contrast to a low-disturbance approach, where farmers want to size and cut residue but leave it on the soil surface.

In each field, test crops of wheat, corn or soybeans, depending on the farmers’ rotations, were planted the following spring. All plots within each field received identical management, although management for each experiment was based on the farmers’ standard practice.

In five fields, soybean residue in the direct-seeded or zero-tillage treatment ranged from an average of 40 to 88 per cent in the fall. In two of the fields, ground cover was measured in the fall and the following spring. Notably, in these two fields, residues decreased by 31 and 57 per cent, respectively, from fall to spring – which gives an indication of the amount of residue lost during the winter to decomposition, according to Lawley.

Results
The study’s findings were surprising: across four of the five experiments, no significant yield differences between treatments were noted in test-crop performance.

In the fifth experiment, where a significant difference was noted, soybean test-crop yield in a conventional tillage treatment was higher by three bushels than the direct-seeded treatment. Lawley noted that soil moisture was higher in this treatment during flowering and early pod fill.

Lawley is cautious about turning these findings into broad recommendations for all producers due both to the wide range of reasons producers use tillage and the variability in on-farm conditions.

“My conclusion as a researcher was that under most conditions you can eliminate tillage and direct seed into soybean residue,” she says. “This would apply most when producers don’t have compaction issues or rutting after harvest.”

If producers intend to eliminate tillage after harvest, it’s key to use equipment that can cut through residue, she adds.

But as to the benefits and risks of a direct-seeding approach, farmers will have to assess this individually, Lawley says. “The results of this study suggest that farmers should be taking a close look at these decisions as under most conditions they can benefit from the time and tillage costs using direct seeding after soybeans,” she says.

Looking ahead
One next step for this research might be to look at various seeders’ ability to handle soybean residue. But Lawley is focused on other ways soybean producers can increase ground cover. One example is the use of cover crops. Lawley has also done work with Manitoba Pulse and Soybean Growers Association’s on-farm research specialist Gregory Bartley looking at the use of residue from a previous wheat crop to provide ground cover after soybean harvest.

“I’ve done this research and now I’m asking farmers to do their own research and consider the question: If we’re going to adopt soybeans in our rotations, how are we going to protect our soils from erosion?” Lawley says.

“This project raises questions about how we should adapt our practices. This will only intensify as soybeans move further west.”


Related
Strip till in soybeans
Occasional tillage OK to get rid of ruts on long-term no-till soils
Soybeans: to till or not to till – revisited
Building soil resilience with cover crops