The harvest of 2016 left many fields deeply rutted from combines and grain carts running over wet land. Many farmers had little choice but to till those direct-seeded fields in an attempt to fill in the ruts and smooth out the ground. But where it was once heresy to till a long-term no-till field, a few tillage passes won’t necessarily result in disastrous consequences. 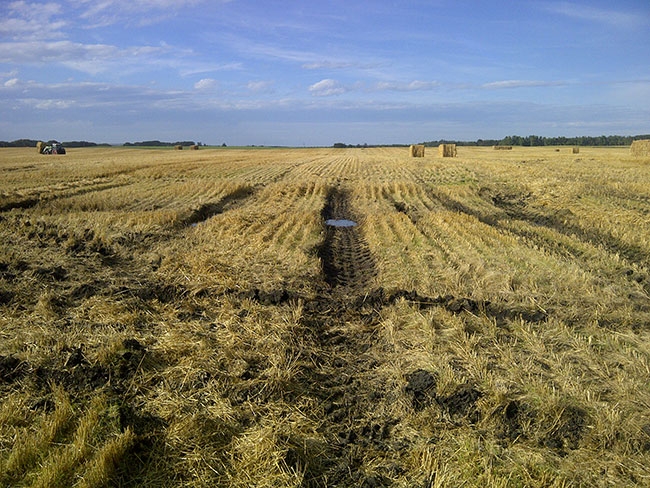 Farmers aren’t likely to undo what they have built up with no-till with a tillage pass or two if they have to cultivate to get rid of ruts,” says Jeff Schoenau, a soil scientist with the University of Saskatchewan. “The only caveat is that our research was conducted on small plots. If the tillage is conducted on the entire field and reduces soil aggregation and residue cover to the point that soil erosion could occur, then there could be some degradation of the soil.”

Total and particulate soil organic carbon, soil pH, and soil aggregation were not affected by the tillage operations. Tillage decreased the bulk density in the five- to 10-centimetre (cm) soil depth, but did not significantly affect soil water content (measured at zero to 10 cm) or spring soil temperature (measured at zero to five cm).

Schoenau says one concern when tillage is eliminated is that phosphorous (P) becomes stratified in the top layer of the soil and may be stranded in dry growing seasons. This research found tillage did reduce the stratification and redistribute P in the tillage zone, but there was no effect on P uptake by the plants.

Yield was not affected in the three years following tillage, except at Tisdale in the first year after tillage. Schoenau says at the time of tillage, the Tisdale plots had heavy straw that was incorporated into the soil. This resulted in immobilization of nitrogen (N) as soil microbes used soil N to help break down the high-carbon cereal straw. The effect did not last past the first year.

“When high carbon residue like wheat straw is incorporated into the soil, you will typically see [a] reduced supply of available nitrogen because of immobilization,” Schoenau says.

Other research at the University of Alberta also supports the notion that occasional tillage is not detrimental to crop yield, soil properties or organic carbon. Miles Dyck of the University of Alberta’s agriculture, life and environmental sciences department and chair of the Breton Plots Management Team, looked at imposing short-term tillage on long-term no-till plots at the Breton and Ellerslie long-term cropping plots.

Plots were cultivated with various tillage treatments in the fall and spring for four years with straw management (straw removed and straw retained) and N fertilizer rates of zero, 50 and 100 kilograms of N per hectare (kg N/ha) in straw-retained plots and zero kg N/ha in straw-removed plots. Soil properties, N and P fertility, nutrient uptake and crop yield were measured.

“From what we observed, if you have been in no-till for 20 or 30 years and you go through a tillage cycle, the soil is resilient enough to be able to avoid degradation,” Dyck says.

When looking at four years of tillage, plant yield, N uptake and P uptake tended to be greater with tillage compared to no-till but were only significant in a few cases at Ellerslie – results that could possibly be explained by greater N availability as organic matter was broken down. However, in the long term, if tillage continued and organic matter declined, N availability would eventually decline as well, resulting in lower yields.

“The benefits of the tillage to remove ruts and get the land back into production will likely offset any negative aspects of soil disturbance and mineralization of organic carbon,” Dyck says.

Schoenau notes more recent research he has been involved in supports the idea that tillage isn’t necessarily harmful in the short term. The first year of a vertical tillage trial in 2016 found no effect on yield under wet conditions, though the vertical tillage did tend to reduce the air permeability in the surface soil. The trial is continuing this year.

These studies also align with a strategic tillage study conducted by Byron Irvine at Agriculture and Agri-Food Canada in 1999. He found soil aggregate size was reduced by tillage but there was little or no impact on soil carbon, nitrogen, bulk density, potentially mineralizable nitrogen or any other soil property measured. In the years after tillage, aggregate size began to return to the pre-tillage size.


Related
Long-term no-till soils have higher fertility
SNEAK PEEK: A small amount of tillage isn’t disastrous for soil quality or yields
No reason to till a no-till field
Long-term zero-till pays back