Two hundred bushels of corn without any nitrogen (N) fertilizer? That happened in 2016 at St. Adolphe, Man., and is one of the more surprising results of a Manitoba Agriculture research trial. 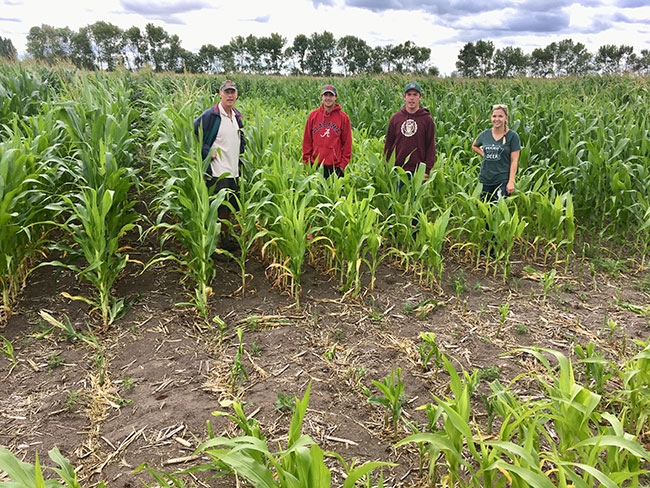 “Some soils have huge nitrogen mineralization. Unfortunately to date we’ve not been able to predict it, even based on organic matter content,” says John Heard, a soil fertility specialist based in Carman, Man.

Heard has been conducting nitrogen trials on corn for many years. In 2018, the University of Manitoba under the direction of soil scientist Don Flaten with masters’ student Lanny Gardiner started a two-year trial looking at all four factors in the 4R Nutrient Stewardship program – rate, source, timing and placement. Mario Tenuta at the university is also conducting an intensive corn N fertilization study looking at greenhouse gas emissions at a few sites across Canada including one in Manitoba.

“The previous nitrogen recommendations for corn in Manitoba were outdated, and there was some contradictory information on how much nitrogen is needed to produce a bushel of corn,” Flaten says.

The last N research done at the University of Manitoba was in 1981 through 1983, and the Manitoba Soil Fertility Guide (2007) and the Guide to Corn Production in Manitoba (2004) publications have top yield targets of 130 bushels per acre – numbers that now feel outdated when corn yields in Manitoba now hit 200 bushels per acre or more in some areas.

The nitrogen recommendations for a 130 bushel per acre corn crop with a soil test of 30 pounds per acre are 195 pounds of nitrogen (lbs. N) from the Manitoba Fertility Guide and 225 pounds per N from the Guide to Corn Production. Those rates mean 1.7 to two lbs. N uptake per bushel of corn. For a 200-bushel corn crop, these recommendations would suggest 340 to 400 lbs. N per acre is required.

“This shouldn’t be a surprise to any of us. Farmers have been doing a better job of nitrogen placement and timing, so more fertilizer N is available to the crop,” Heard says. “With the high yield potential, nitrogen use efficiency of corn has improved as well.”

“I think there are opportunities to fine-tune nitrogen recommendations,” Flaten says. “If we are over-fertilizing corn, it is more expensive and has more environmental risk.”

The U of M research is looking at many aspects of the 4Rs. Rate treatments range from zero to 200 pounds per acre. Sources include urea, UAN, and enhanced efficiency fertilizers alone and in a blend with urea or as UAN. Timing and placement include pre-plant broadcast, post-plant broadcast, and split applications of pre-plant and V4 or V6.

The research is also hoping to develop a better way to estimate mineralization and to develop decision tools for in-season applications. Funding is coming from the Manitoba Corn Growers Association and Nutrien.

Right rate
While the U of M research won’t have recommendations until after the 2019 growing season, Heard’s field research over the past few years provides guidance in the interim. His research in 2016 and 2017 at 10 sites compared six nitrogen rates of surface broadcast SuperU (zero, 40, 80, 120, 160 and 200 lbs. N/ac.) Additional treatments included split N application of 40 to 80 lbs. N/ac as surface dribbled UAN at V4 to V8 stages.

Very high yields were achieved at many sites even without applied N. Estimated mineralization was 150 lbs. N per acre or more at six of 10 sites, which Heard says is about three times greater than traditional estimates. To find out if organic matter content could be used to predict mineralized N, he plotted estimated mineralized N against organic matter content of the soils and found they were poorly correlated.

“There is a tremendous amount of mineralization in row crop corn production systems. The nitrate-N soil test doesn’t account for it, so we need better tools for predicting mineralized N,” Heard says.

Heard mentioned that the agricultural industry is actively developing decision tools that may help estimate in-season mineralization and losses. These include tools from Climate Corporation, Adapt-N from Cornell University, Farmers Edge’s FarmCommand and N Manager, and Encirca from Corteva, but remain untested by public research in Manitoba.

Right timing and placement
Grower surveys in Manitoba, indicate that about one-third of farmers apply all their nitrogen in the fall, usually as anhydrous ammonia; another one-third as broadcast urea mostly pre-seed; and the last one-third splitting application between pre-seed and in-season.

Since corn N uptake is continuous from emergence to grain fill, Heard says there are opportunities to split N fertilizer application between seeding with an in-crop band. In his research, UAN was sidebanded with a Y-drop applicator that directed the dribbleband to both sides of the corn plant. The results found that at N responsive sites with fertilizer N of 40 lbs. N per acre or more, yield was similar between broadcast N at seeding and split applications at the V4 and V8 stages.

On-farm trials conducted by the Manitoba Corn Growers Association found similar results with split applications in 2017. These nine trials in the Red River Valley compared the farmer’s base application rate of N fertilizer at seeding compared to the base rate less 40 pounds plus a sidedress application of 40 lbs. N as UAN between V4 and V6. Application timing of sidedress UAN at one site was V8. UAN was applied with various methods including Y-drop, streamed, coulter injected and broadcast.

On average, there was no difference between the spring-applied base N and the split N application in 2017. The sidedress application at V8 had lower yield, attributed to the dry conditions where N uptake was possibly restricted.

“In the U.S. corn belt, in-season N application is common because of their wet growing season. A lot of land has tile drainage and if all the N fertilizer was put on at seeding, there would be leaching losses,” Flaten says. “In Western Canada, we don’t have the same degree of leaching risk. With our high level of mineralization, we have more cases of ‘appearance’ of N during the growing season than ‘disappearance.’”

The other challenge for split application is stranding of the dribble band or broadcast N on the soil surface during a dry growing season. Guy Lafond’s research on split N applications on wheat at Agriculture and Agri-Food Canada in Indian Head, Sask. found that it worked two out of three years, but dryness in the third year resulted in stranding of N on the soil surface and lower yield.

“There is a grower fascination with late season split application. It is a different way to apply nitrogen, but not necessarily a better way,” Heard says.

“Enhanced efficiency fertilizers don’t increase yield but protect yield that could be lost because of nitrogen losses,” Heard says. “You probably wouldn’t have lost much N in 2017 or 2018 because it was dry, unless you surface broadcast urea without incorporation which would have resulted in volatilization losses.”

“Dr. Emerson Nafziger, from the University of Illinois, has said there are 21 ways to supply 150 pounds of N to corn.  We have opportunities to fine-tune our application strategies so agronomists and growers can adapt them to their individual circumstances,” Heard says.