Irrigated corn has been a mainstay in southern Alberta, but as corn breeders push the maturity barriers lower, corn has become more appealing to dryland farmers. In order to develop agronomic recommendations specific to dryland corn production, Farming Smarter, an applied research organization at Lethbridge, Alta. conducted a three-year study from 2015 through 2017 to assess the impact of several agronomic factors on corn production. 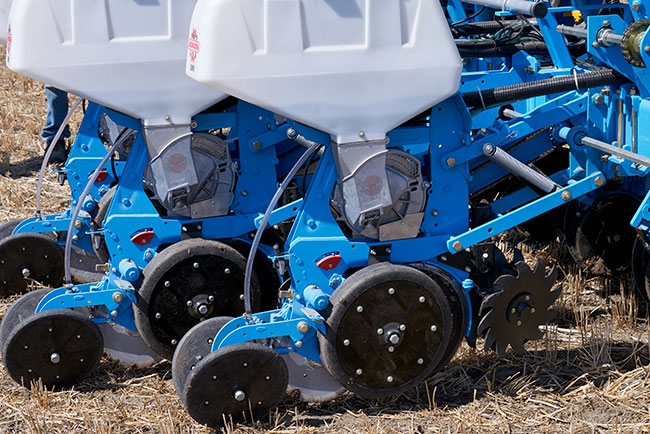 “There hasn’t been a lot of work done on dryland corn in southern Alberta, especially considering most of the acreage would be grown under zero-till conditions,” says Ken Coles, general manager of Farming Smarter. “We have preconceived notions of corn agronomy from irrigated crops, so we wanted to find out what works on dryland corn.”

The research was conducted at Lethbridge in the Dark Brown soil zone, and Vauxhall, Bow Island and Medicine Hat in the Brown soil zone. The 2015 and 2017 growing seasons had abnormally low precipitation and high heat units while 2016 was close to normal. A Monosem vacuum planter was used in the trials. It was equipped with fixed residue managers. The earliest maturing corn variety available at that time, Pioneer P7332R (2050 CHU), was used in the trials.

“Narrow row spacing makes sense because canopy closure by the June solstice is a goal of corn production,” Coles says. “We thought that a lower seeding rate would mean less competition between corn plants in drier conditions. We never saw that and had higher yields with increasing seeding rates.”

Based on this research, to maximize yield Coles says that dryland grain corn should be sown at 20 inch row spacing and the sweet spot for seeding rate between 30,000 to 35,000 seeds per acre.

Despite overall low soil test N, Coles says there was limited corn response to N fertilizer. Average yields ranged from 78 to 83 bushels per acre, except for a significant decrease in yield with 100 pounds sideband plus 100 pounds in-crop, which dropped to 70 bushels per acre.

To better compare total available N across site years, Coles plotted the per cent of maximum yield versus soil available N added with the fertilizer N. He found that optimal yield occurred when total available nitrogen from the soil combined with nitrogen applied at seeding was between 50 kg/ha and 200 kg/ha. A rule of thumb is that 1.2 pounds per acre of N are required for one bushel of yield. With an average yield around 80 bushels per acre in these trials, this would equate to about 96 pounds per acre soil and fertilizer N.

“We never saw much of a response to nitrogen. Maybe partly because our no-till soils are more fertile and supplied more in-season mineralized N, and because moisture was a limiting factor,” Coles says.

Tillage and crop rotation
In this trial, corn was planted on wheat, soybean, pea, lentil, mustard, canola and corn stubble at Lethbridge, Vauxhall and Medicine Hat from 2015 through 2017.  Zero-till and conventional tillage were compared.

Corn planted on tilled land had much better germination at 99 per cent compared to no-till at 83 per cent. The difference in germination was attributed to hair pinning of crop residue that impacted seed placement and germination. However, zero till yielded an average of 2.4 bushels per acre higher, which Coles attributes to better soil moisture conservation during the hot and dry conditions of 2015 and 2017.

Coles reported that given the dry growing conditions for much of the study, the no-till plots were much more vigorous and able to compensate with larger cobs.

Part of the challenge with the tillage study was that the fixed residue managers didn’t always adequately clear residue in front of the disc openers. Each residue manager had to be adjusted manually, and differences in stubble types resulted in variable seed placement and germination under no-till.

“If we were to install floating residue cleaners, we are confident we could see comparable germination and possibly higher yield than we would in the cultivated plots,” Coles says.

Under conventional tillage, the types of crop residue showed little yield differences. However, no-till had significantly different yields depending on crop residue. Zero till yields were equal or greater to conventional till yields in every residue treatment except canola and mustard, which were lower. This was likely due to these two crops being non-mycorrhizal, which can mean lower nutrient uptake especially with phosphorus.

Coles says that dryland corn growers with no-till planters would have the greatest success on pulse crop stubble. Corn grown on pea, lentil and soybean stubble yielded the highest in both conventional and zero till. This was due to the nitrogen fixing properties of pulse crops in addition to low amounts of crop residue.

Overall, Coles thinks that corn has potential on dryland in southern Alberta.

“One of the surprising things we found out over the years was that corn was surprisingly drought tolerant. It performed fairly well with yields from 60 to 120 bushels per acre with little moisture,” Coles says. “That was impressive even compared to wheat.”