Features Agronomy Other Crops
The world of on-farm research

When it comes to on-farm field research, conflicting data runs free. In a world where public, industrial, and independent researchers alike widely dispute plot protocols and results, farmers need to keep a watchful eye out for “bad science” bandits. 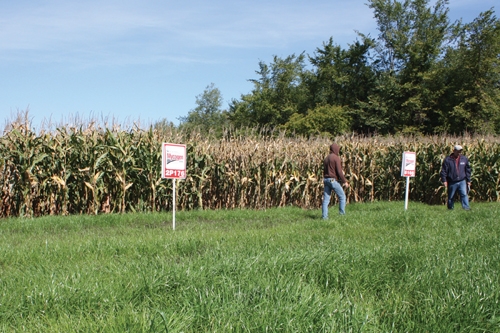 Mycogen test plot. When it comes to on-farm field research

When the smoke clears, experts can agree that farmers are their own last defence against misinformation. There’s a variety of source materials available across the country and almost everyone encourages farmers to consider a wide range of results before they draw conclusions. In the case of less variable technologies, such as macronutrient application or soil tillage, referring to historical data can compensate for smaller volumes of experimental references. But for rapidly advancing sectors producing new pest control, seed, and other short-lived products, there seems to be more of an annual effort to conduct research, and many researchers feel this is an area farmers more commonly dabble in.

Ask a group of experts how farmers can get the best results from on-farm research and a “high noon” dispute may be quick to follow. Some specialists defend heavily replicated small plots as the best sources of information since they can offer more control over variables, but others support full field-length strip trials. Peter Johnson, provincial cereals specialist with the Ontario Ministry of Agriculture, Food, and Rural Affairs (OMAFRA), believes that it is critical for farmers to test small plot research on their own farm and suggests that they conduct small strip trials where each different strip is replicated at least twice.

Over time, Johnson says the research farms where many trials are conducted have become places that no longer necessarily represent true field research. Years of careful fertility monitoring and supplementation have created rich soils that really do not reflect the average conditions of the commercial farm. Taking small plot trial results purely at face value, particularly when few sites are considered, can be very misleading. He says that one trial, with only one replication, demonstrating a 10 percent yield difference, only has a 52 percent chance of being a valid result.

To get a much better sense of how stable these results are, Johnson advises farmers to compare their own replicated strip plot results with small plot trial results across many different regions. But Dave Harwood, who is the technical services manager for Pioneer Hi-Bred, says that in his experience multiple sites without replications can predict real seed performance results better.

“Replications within sites are valuable when that’s all you have, but we find the most predictive data comes from multiple sites,” says Harwood. “In larger plot areas, you have the power of many smaller replications essentially within each large plot, which serve like replications do in small plots.”

Harwood suggests farmers look for test sites that feature the same characteristics and production practices they use and compare similar sites within a region for an apples-to-apples evaluation. Although this is an option for studying seed performance, he admits this isn’t always an option for other types of research. Having worked with public sector specialists like Johnson and academic researchers at the University of Guelph, Harwood knows these experts are working with finite resources, just like anyone else. Harwood says it is a bit of a balancing act to include these extra initiatives into daily activities, but it can be done if it’s well planned.

Ian McDonald, applied research co-ordinator of field crops for OMAFRA, only partly agrees. He agrees with both Harwood and Johnson that on-farm field scale trials can provide very powerful information when they are done well. But when they’re not done well, he says, they detract from the ones that are and it’s nearly impossible to identify the poor ones by a simple chart of results.

“A common struggle with on-farm trials is they’re started with good intentions but there isn’t always the follow through to complete them with the same rigour,” says McDonald. “Keeping good records is an often overlooked but critically important part of conducting high-quality on-farm trials.”

Without in-season monitoring, McDonald knows that it is easy to miss the whole story that a field plot is trying to tell. He says the worst thing that he sees is when plot co-operators take shortcuts and fail to disclose their methods when they offer their final results. Splitting a field into two parts is not a good way to conduct trials, nor is having a large number of random treatments without at least one duplicate variety across the plot area. Though he knows of many really great exceptions to cases such as these, McDonald says these sorts of trials are still far too common and there is no way to know if there is field variation distorting this information. John Heard, crop nutrition specialist with Manitoba Agriculture, Food, and Rural Initiatives (MAFRI), has conducted studies on the value of on-farm research, looking at several cases across North America. He says that, unfortunately, he had a very difficult time finding examples of on-farm research that had been done well and found most farmers would rather pay someone else to do the plot work than do it themselves.

Heard says he sees problems particularly when farmers want to have more than three strips in a field plot because it becomes difficult to test each strip fairly across knolls or through wet spots, and replicate it three or four times in the same field. Instead, he likes to see farmers make use of independent sources of information. In Manitoba, one of those sources is Brent VanKoughnet of AgriSkills Inc.

As a farmer and consultant who is often hired by farm associations or large ag retail companies, VanKoughnet uses his operation to combine scientific methods in a farm setting. Like many farmers, he uses his yield monitor to gauge results, but unlike many other farmers, he calibrates it using a weigh wagon. He doesn’t do anything that isn’t replicated at least four times and particularly likes field-scale trials for disease testing. VanKoughnet says he thinks it’s important for farmers to constantly challenge the information they get from any source to continue to improve as managers.

“There needs to be an appropriate level of cynicism,” says VanKoughnet. “It shakes us out of our complacency.”
To VanKoughnet, on-farm testing is all about improving collective farming practices for everyone. It’s the same idea Mark Lawton, Monsanto’s technology development lead, expresses when he talks about his own company’s motivation to conduct research plots. Even within the seed industry, Lawton feels the right spirit exists behind the research that is being conducted, even if there is disagreement on the finer points of plot protocols.

Lawton says that in his experience, farmers are extremely curious and that is why they are willing to put in the time with so many researchers. How they decipher that data is up to them but everyone gains from the process and learns together. It’s what keeps agriculture interesting and makes the work fun, he says.