All agronomy recommendations are generalized. They can be specific to a region, but every farm is different,” says Chad Anderson, Ontario Soil and Crop Improvement Association (OSCIA) director for the St. Clair Region. “I have a lot of livestock and use a lot of manure, so my [nitrogen] rates are different than a farm that doesn’t use a lot of manure. The thing about doing your own testing is that it gets away from that generalization.” 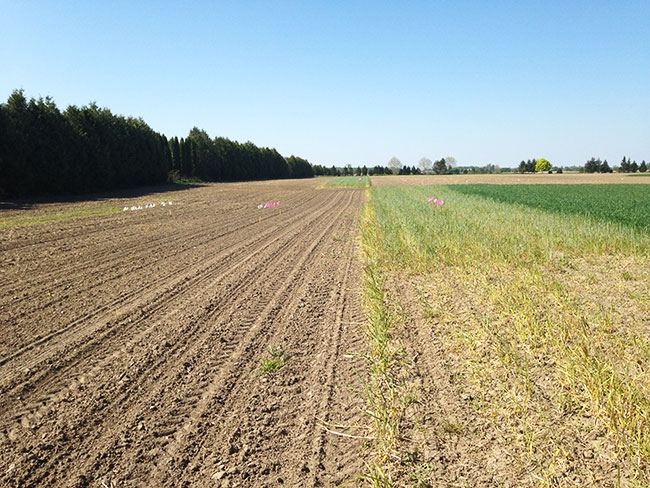 Anderson, a beef producer in Lambton County, Ont., has been involved in many on-farm trials over the years, including a long-term neonicotinoid side-by-side trial and fungicide trials in soybean and nitrogen (N) rate trials in wheat, to name just a few.

He says hosting on-farm trials takes time and patience and involves extra work for producers when they’re at their busiest, but it’s work that pays off. “You don’t improve anything unless you test it,” he says.

Investigating new ideas
OSCIA, a not-for-profit organization, has been around since 1939 and currently boasts more than 4,000 members across the province.

“Ever since the beginnings of the organization, it was all about like-minded people wanting to investigate new ideas in superior crop production,” says Andrew Graham, OSCIA’s executive director. “We’re still very true to the original reasons why the organization was formed: finding ways to practice sustainable agriculture and get as much from the soil as possible in a sustainable way.”

OSCIA connects producers with organizations looking for on-farm trial sites and offers resources and funding to help make trials happen. The organization pools money with the Ontario Ministry of Agriculture, Food and Rural Affairs (OMAFRA) and makes it available to local clubs. Funding is organized in two tiers: Tier 1 funding involves $1,500 per year offered to counties or regional organizations to cover educational events or one-year farm trials. Tier 2 funding – a total of $100,000 per year for three years – goes to four ongoing projects chosen for their broad appeal to members.

Graham says each of the Tier 2 projects is meticulously organized, with research protocols overseen by OMAFRA staff. “We’ve insisted that for every one of the project trials the protocols are satisfied and the treatments are properly replicated and well managed,” he says.

Regular project updates are provided at regional meetings and in newsletters. Once projects are complete, information is “packaged” in writing and shared in the Crop Advances publication on the OSCIA website.

Ian McDonald is the applied research co-ordinator in field crops for OMAFRA. He says there are currently 13 crop specialists for field crops in Ontario, each of whom is assigned as a research liaison with the 11 regional soil and crop associations.

“Our primary role in OMAFRA is to help steer the projects to make sure the question that’s being asked is clear, that the treatment being assigned is correct and is implemented and assessed properly,” he says. “We roll up the data and do the statistics and work in collaboration with the farmer to write the final reports.”

Benefits outweigh drawbacks
McDonald says each year there are hundreds of on-farm projects across the industry, from variety trials to agronomy trials, but farmers aren’t always directly involved in doing treatments or assessments. “They’re interested but busy,” he says. “Farmers are involved but the seed companies, retail people or OMAFRA are doing much of the work. Farmers are often fully engaged in the planting and harvesting of various types of plots in collaboration with the project advisor, which is a crucial role, but less involved in the day to day assessments and monitoring and report writing, etcetera.”

According to Gord Green, OSCIA’s past president and a dairy producer in Oxford County, farmers often struggle with the inconvenience of on-farm trials. “It’s annoying for the farmer to have to do a research plot because he could plant 100 acres per day, but all of a sudden he’s putting in a couple of hours on a test plot, and the flow of production gets interrupted,” he says.

But many believe the extra work is worth it, he explains, because they want the results.

“One of the problems is getting unbiased information. With variety trials for instance, all the corn companies say they have the best corn, and if you look at the test plot information, notoriously a seed company’s plots always beat the competition,” he says. “They’re not unbiased. It’s important to get information that nobody will benefit from who’s involved in running the trial.”

Last year, Green was involved in the neonic project, as well as a digestate-based cover cropping study overseen by Christine Brown, a field crops sustainability specialist with OMAFRA.

Green says many benefits of on-farm trials outweigh the drawbacks; chief among the benefits is locally relevant data. “Some of the stuff we’re doing, for instance with cover crops, there isn’t much research out there,” he says. “There are lots of guys who think cover cropping is wonderful but we don’t have the numbers to back it up.”

“There are a lot of ideas, but we need to test them out,” he concludes.